In 2020, four different species of seals were observed in the Montréal metropolitan region, hundreds of kilometres from their normal ranges. Although such movements are outside the usual behaviour of these animals, the Quebec Marine Mammal Emergency Response Network (QMMERN) receives several reports every year concerning seals that have ventured beyond the St. Lawrence Estuary. “Despite the significant media attention given to these cases, they are not unusual when compared to those of years past,” points out QMMERN coordinator Robert Michaud. Recap of these pinnipeds outside their usual range.

A bearded seal appearing to be in good physical condition was observed in June in a marina in Laval. Then, after a few days, the seal was never to be seen again.

On July 24, a young hooded seal surprised officials at La Ronde marina in Montréal. Initial photos and videos of the animal showed a healthy individual a few months old. However, after about two weeks, the animal’s behaviour began to change. It began spending more time out of the water, showing rapid weight loss and a sort of discharge from its eyes. Its presence on the pontoon or the boat launch put it at greater risk of an incident. Additionally, people who had to frequently walk near the animal were at increased risk of an attack or a bite. On August 12, a team of veterinarians from the Université de Montréal’s Faculty of Veterinary Medicine examined the seal. Its state of health led veterinarians to end its suffering by euthanizing it.

On August 12, a second young hooded seal was observed in Saint-Ours, in the Richelieu River. According to the veterinarians who were consulted, the animal appeared to be in good health and body condition. The animal has not been seen again since June 17. 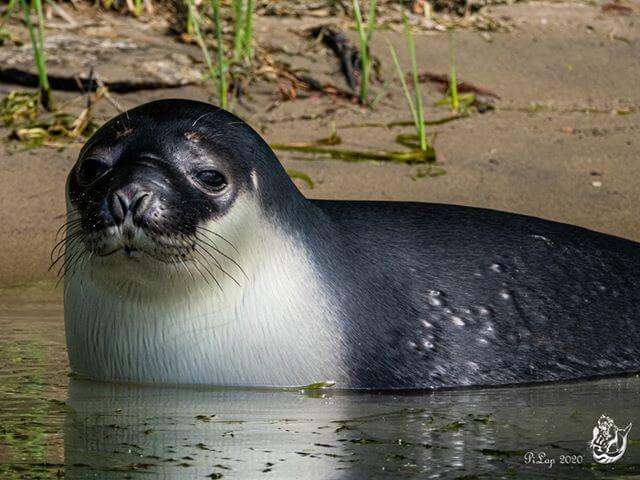 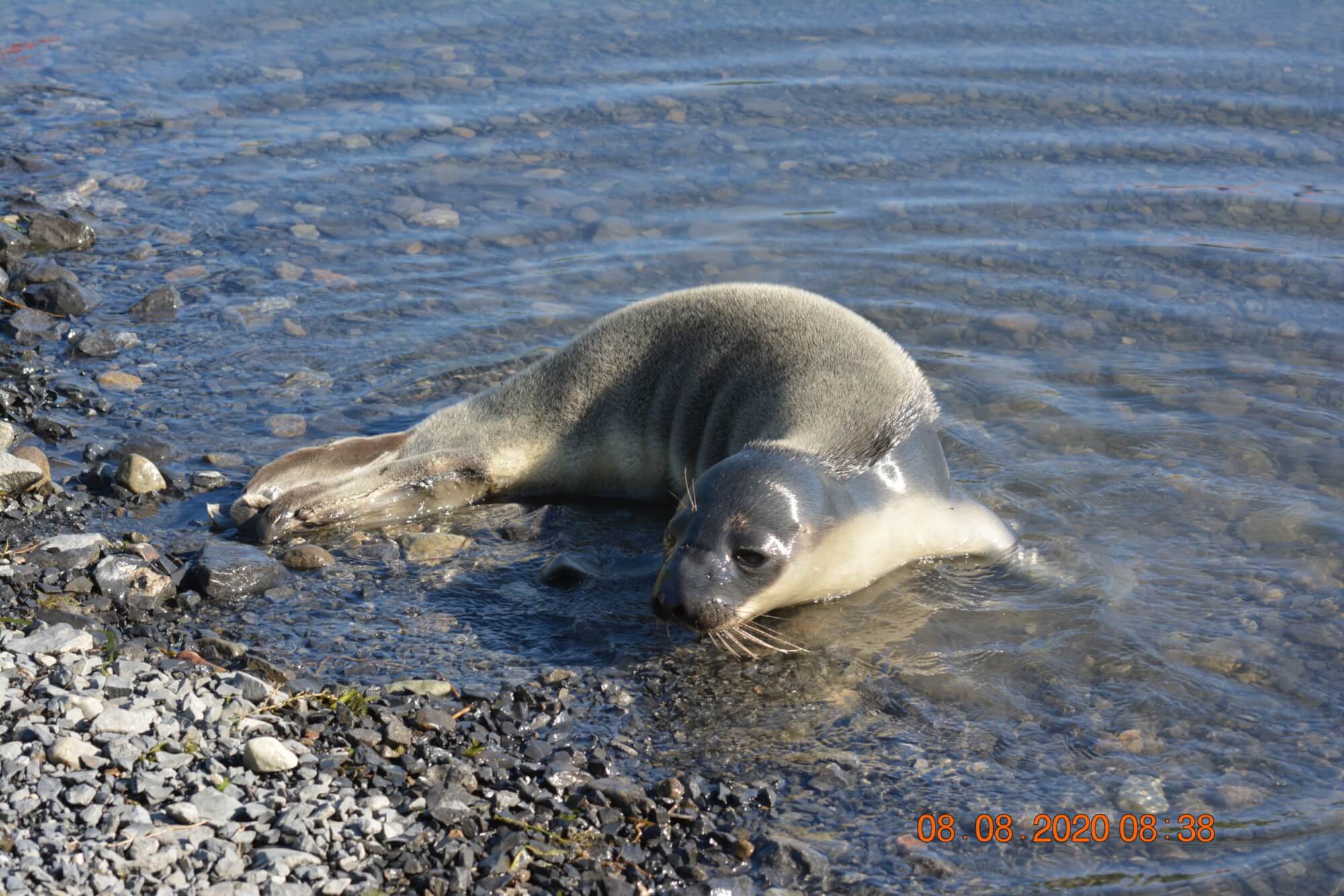 What brings these seals to the metropolitan area?

Often, young individuals are discovered in fresh water, far from their natural habitat. Any of a number of hypotheses might explain their presence, and it is possible that it is a combination of factors. Is this exploratory behaviour motivated by curiosity? Are the animals searching for new territories due to an increase in population or a decrease in food stocks? Or, could their presence be attributable to an illness that causes them to lose their bearings? In any case, seals generally cease to be sighted after a few days or weeks without a carcass ever being found. It can therefore be assumed that many of these animals return to their natural habitat.

What’s the use of reporting a seal outside its normal range?

The reports allow respondents to raise public awareness to ensure a harmonious coexistence between the stray seal and people likely to encounter it. Indeed, the main danger these seals face is the presence of humans and their activities.

Either way, these animals are quite well adapted to fresh water. But since they are in a completely different environment from the one they are accustomed to, it is important to report them to the QMMERN so that their state of health can be monitored. In some cases, the seal can be moved.

Lastly, reports also allow the QMMERN to track the number of seals observed outside their usual sector over time. Scientists can therefore observe whether an abnormally high number of pinnipeds outside their normal range are being observed or identify trends in the presence of certain species.

Sharing space with these occasional visitors in Quebec’s cities

Whether you see a seal in town or in the wild, the guidelines to be followed remain the same. Maintain a minimum distance of 50 m from the animal as much as possible. Do not attempt to feed it, spray it, touch it or coax it back into the water. It is normal for a seal to spend time resting on shore. Even if they are motivated by the best of intentions, these actions are more likely to harm the seal than to help it, in addition to jeopardizing the person’s own safety. Indeed, feeding a seal could render it unfit to forage on its own, and approaching it for any reason could result in the transmission of disease in either direction. Since they are wild animals, seals can sometimes become aggressive and bite, in addition to carrying any number of diseases. It should also be noted that it is against the law to disturb a seal. 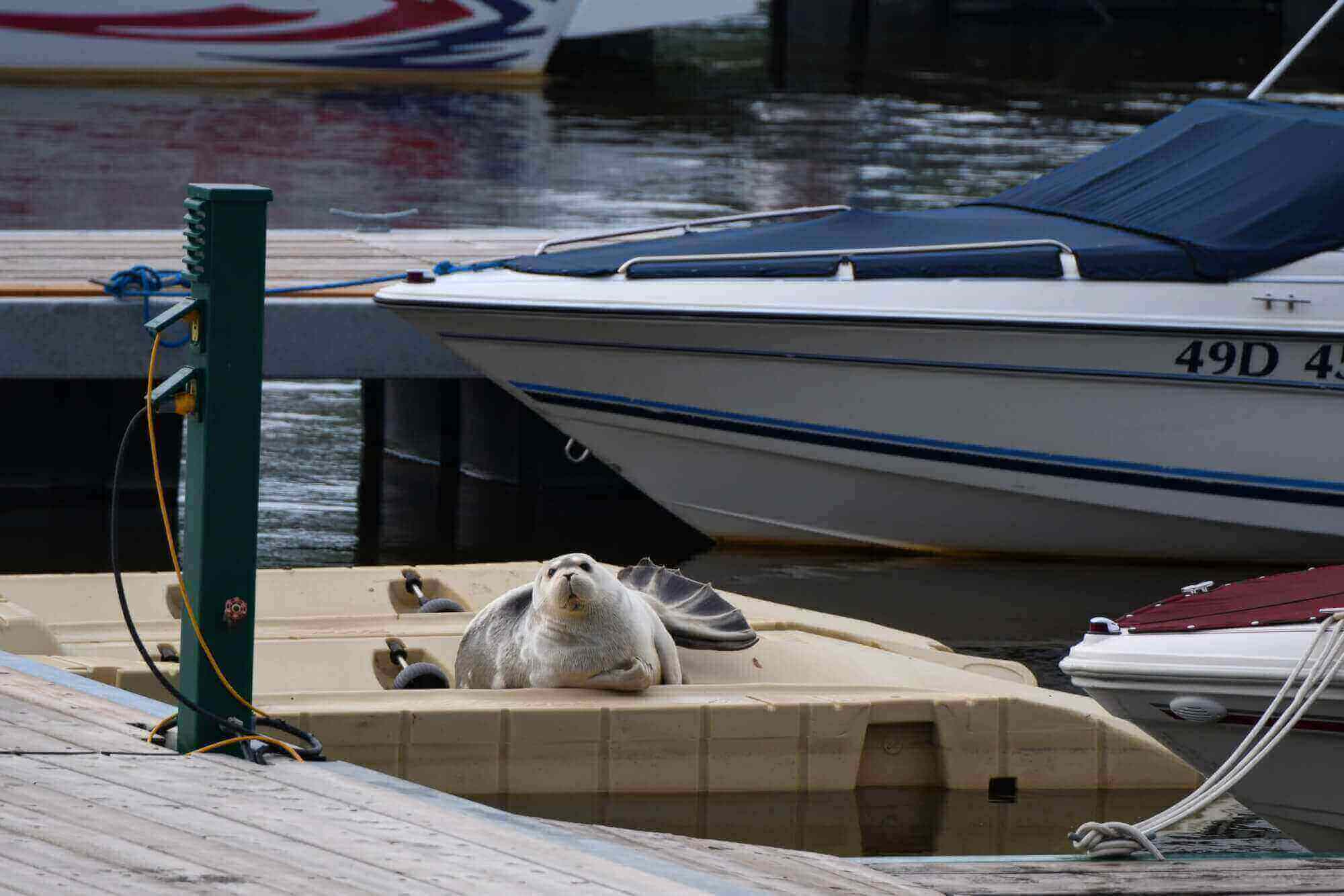 Seals come out of the water to rest, like this bearded seal. ©
Marine Mammal Emergencies - 21/8/2020 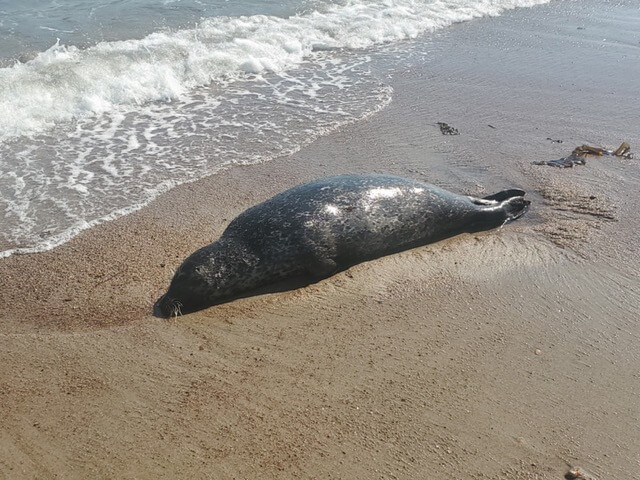