Right Whale Carcass Found in US Identified As Snake Eyes 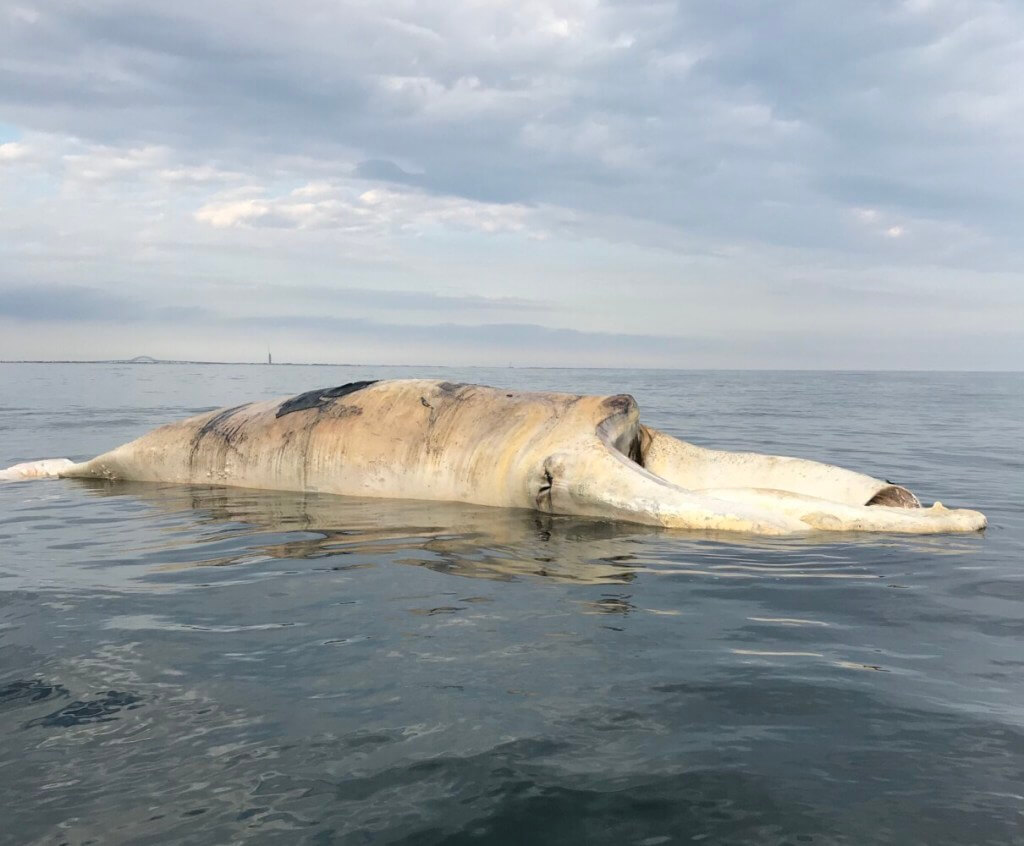 The North Atlantic right whale carcass found off Long Island, New York on September 16 was identified by the New England Aquarium team as Snake Eyes. This male was over 40 years old. He was found severely entangled in fishing rope on August 6 in the Gulf of St. Lawrence. Snake Eyes becomes the tenth right whale found dead in North American waters in 2019.

For the moment, we cannot confirm the role of entanglement in the whale’s death, as there were no signs of rope on the carcass when it was discovered. During an aerial surveillance flight conducted on August 6, Snake Eyes was spotted severely entangled. In the days that followed, adverse weather conditions prevented the disentanglement experts of the Campobello Whale Rescue Team from venturing out to the site. Surveillance flights did not succeed in relocating the carcass either.

What happened between August 6 and September 16, when the carcass was spotted in an advanced state of decay? It’s impossible to know.

A necropsy was conducted on September 18 by a team consisting of the Atlantic Marine Conservation Society, the International Fund for Animal Welfare (IFAW) and the Center for Coastal Studies. Tissue analyses might help shed more light on the animal’s death.

There is some confusion with regard to the carcass tally. An exact count is not so straightforward given that carcasses can drift several kilometres in a single day and are continually decomposing. When a carcass was discovered on July 21, 2019 in the Gulf of St. Lawrence, it was impossible to confirm whether or not it was the same one as that found on June 24 and not relocated since. Analysis of photos taken by fishermen, Fisheries and Oceans Canada and Transport Canada, combined with analysis of possible drift trajectories, unfortunately could not confirm whether it was the same carcass. Confirming this empirically would require genetic analysis.

As a result, the official number of right whale carcasses found in Canadian waters in 2019 is nine. If one adds Snake Eyes’ carcass in the US, no fewer than ten North Atlantic right whales died in 2019, which equates to a loss of roughly 2% of the population.

Snake Eyes was photographed in the Saguenay-St. Lawrence Marine Park in 1998. Taken by tourists aboard a whale-watching craft, this photo represents the first confirmed sighting of the species in this area since the days of Basque whalers! Other right whale sightings are made in the Estuary, the last of which was confirmed in 2016.

Right whales in Canada and the US

This summer, at least 126 right whales visited the Gulf of St. Lawrence. In the September edition of the North Atlantic Right Whale Consortium newsletter, Tim Cole of the Northeast Fisheries Science Center reports identifying them through photos taken during aerial surveillance efforts by Canada and the US. Other photos taken aboard ships have not yet been analyzed and could increase the number of individuals identified.

Aerial and underwater surveillance using acoustic detection devices continues off the coasts of both countries. A few right whales were spotted in the Bay of Fundy during various flights in September. One individual was also observed between the Mingan Islands and Anticosti Island on September 12. Others are still swimming in the Gulf of St. Lawrence. In the United States, groups of right whales have been spotted off Nantucket Island. Over the next few months, right whales are expected to migrate to their wintering grounds. Some North Atlantic right whales, especially females and juveniles, winter in the southern coastal waters of the United States, off the coasts of Florida and Georgia. Another portion of the population is believed to spend the winter far offshore, out of sight of human eyes.