Why put a price on a whale?

Attributing a monetary value to a whale can help educate the general public about the conservation of these animals. © GREMM

How much is a whale worth? According to a 2019 study conducted by the International Monetary Fund (IMF), a large whale is estimated to be worth two million dollars! But why take the time to quantify how much a living being is worth, how does one go about it, and what is the point of such an exercise?

Environmental economists can assess the monetary value of ecosystem services, i.e. the economic value of the benefits that humans derive from nature. They are also able to estimate the value of a living organism as complex as a whale by estimating the cost of its services that it contributes to human well-being. The objective is often to answer the question: How much would humans have to spend to compensate for the loss of the services offered by an ecosystem? With regard to whales, carbon storage and the whale-watching industry can be viewed as services that have a quantifiable value.

Whales play an important role in the planetary ecosystem, especially with regard to carbon storage. Indeed, through their iron- and nitrogen-rich excrement, whales stimulate the growth of phytoplankton. Like a fertilizer applied to poor soil, whale feces feeds nutrients back into the ocean. In temperate waters, nitrogen and phosphorus are present in limited quantities, while in cold regions, iron is a limiting factor for the growth of phytoplankton. When a whale moves vertically in the water column to breathe and horizontally to migrate, it transports great quantities of nutrients necessary for the growth of these microorganisms through phenomena referred to as a pump and conveyor belt, respectively. However, the majority of phytoplankton photosynthesize and can therefore store large amounts of CO2. Phytoplankton alone store 40% of the carbon produced on our planet, which is equivalent to the carbon capture of 1.7 trillion trees!

On the other hand, every living creature accumulates carbon over the course of its life, as this element is the basis of complex molecules. Due to their size and longevity, whales accumulate massive quantities of carbon, which they take with them to the bottom of the ocean when they die. Each large whale removes from the atmosphere an average of 33 tonnes of CO2, which is equivalent to the annual carbon sequestration of 1,515 trees.

Lastly, other important economic contributions made by whales are healthier fisheries through nutrient recycling and the whale-watching industry in general. These latter components are every bit as important to consider in a whale’s economic value as its role as a carbon sink. 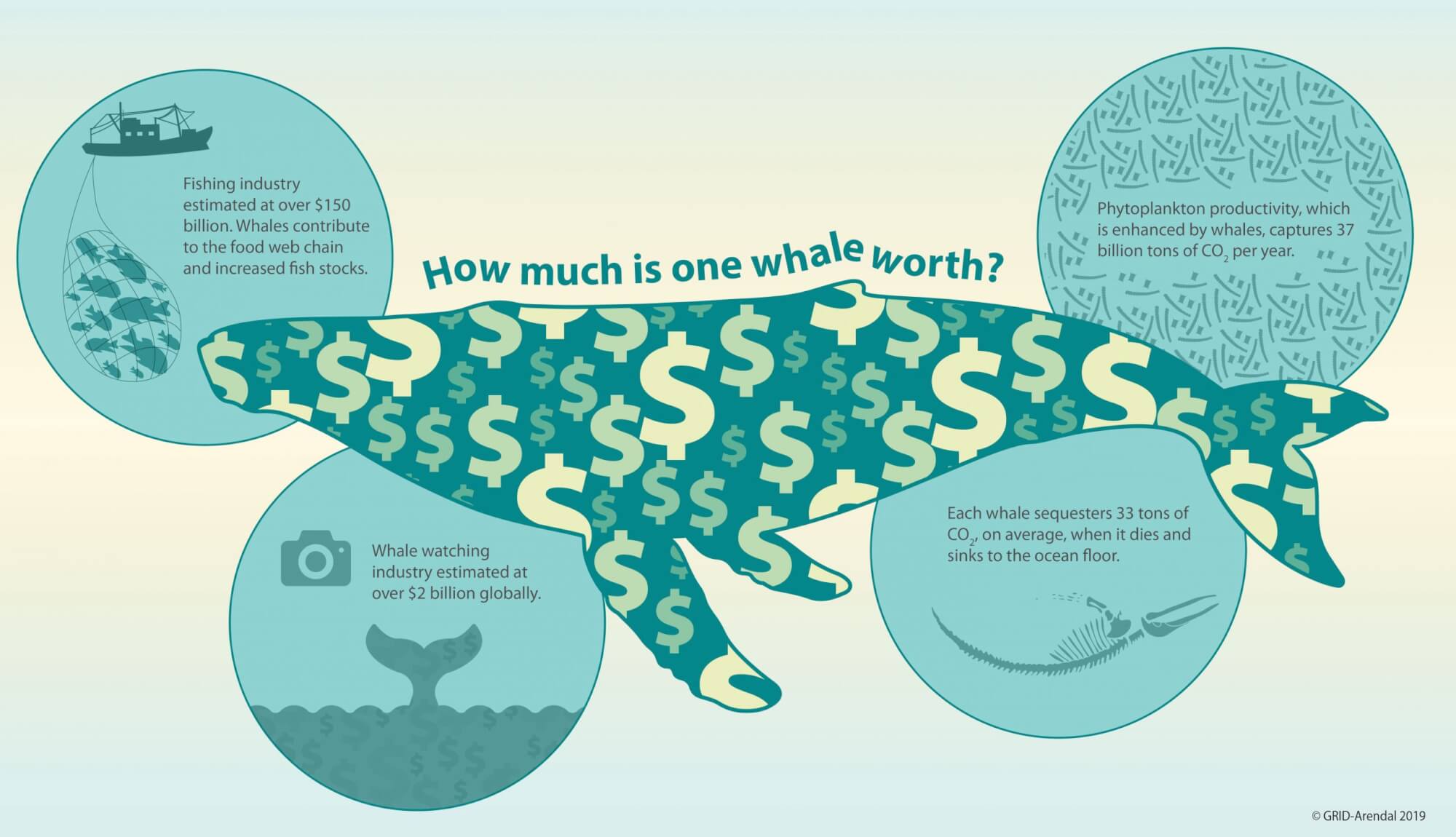 Whales possess a number of characteristics that increase their value. In addition to fuelling the growth of phytoplankton,they store tremendous quantities of carbon themselves over the course of their lifetime. They are genuine carbon sinks. Additionally, cetaceans contribute to the health of fisheries through the recycling of nutrients, not to mention the whale-watching industry. © GRID-Arendal 2019

An argument for their protection

What is the point of performing such calculations? One advantage of this practice is that it helps educate the general public about the importance of a particular species and the benefits of nature in general. Using an economic indicator to encapsulate the contribution of nature also helps ensure its long-term protection while promoting the principles of social justice and intergenerational equity. Calculating an economic value associated with an ecological phenomenon can thus serve as an argument and decision-making tool for funding the protection, management or restoration of an ecosystem component.

The management and protection of whales is complex, as these animals are considered international public goods on account of their migrations that span the globe. Demonstrating that the benefits afforded by their protection greatly exceed the associated costs is an argument in favour of the introduction of new conservation or compensation measures.

Jérôme Dupras, professor at the Department of Natural Sciences of the Université du Québec en Outaouais and researcher at the Institute of Temperate Forest Sciences (ISFORT), is critical of calculating a whale’s value strictly from an economic perspective. This expert in environmental economics argues that species have an intrinsic and relational value and that all these values ​​also constitute arguments for their management and protection. “For example, I’m not sure that it’s healthy to place an economic value on an endangered species, since it is not so much its economic value, but rather much broader values ​​that should determine whether or not we should protect a species.” We run the risk of instrumentalizing an animal or reducing an individual to its economic value.”

In addition to economic issues, it is important not to neglect social accessibility indicators and ethical issues. As part of his research on the interactions between human activities and nature, Jérôme Dupras is interested not only in total economic value, which includes concrete and tangible values, but also intangible values ​​that are bequeathed to future generations.

Taking into consideration all of a whale’s interactions with the world around it helps one realize the importance of protecting members of its species. But putting a price tag on a whale is quite a challenge, since it also has an intrinsic value that cannot be quantified. 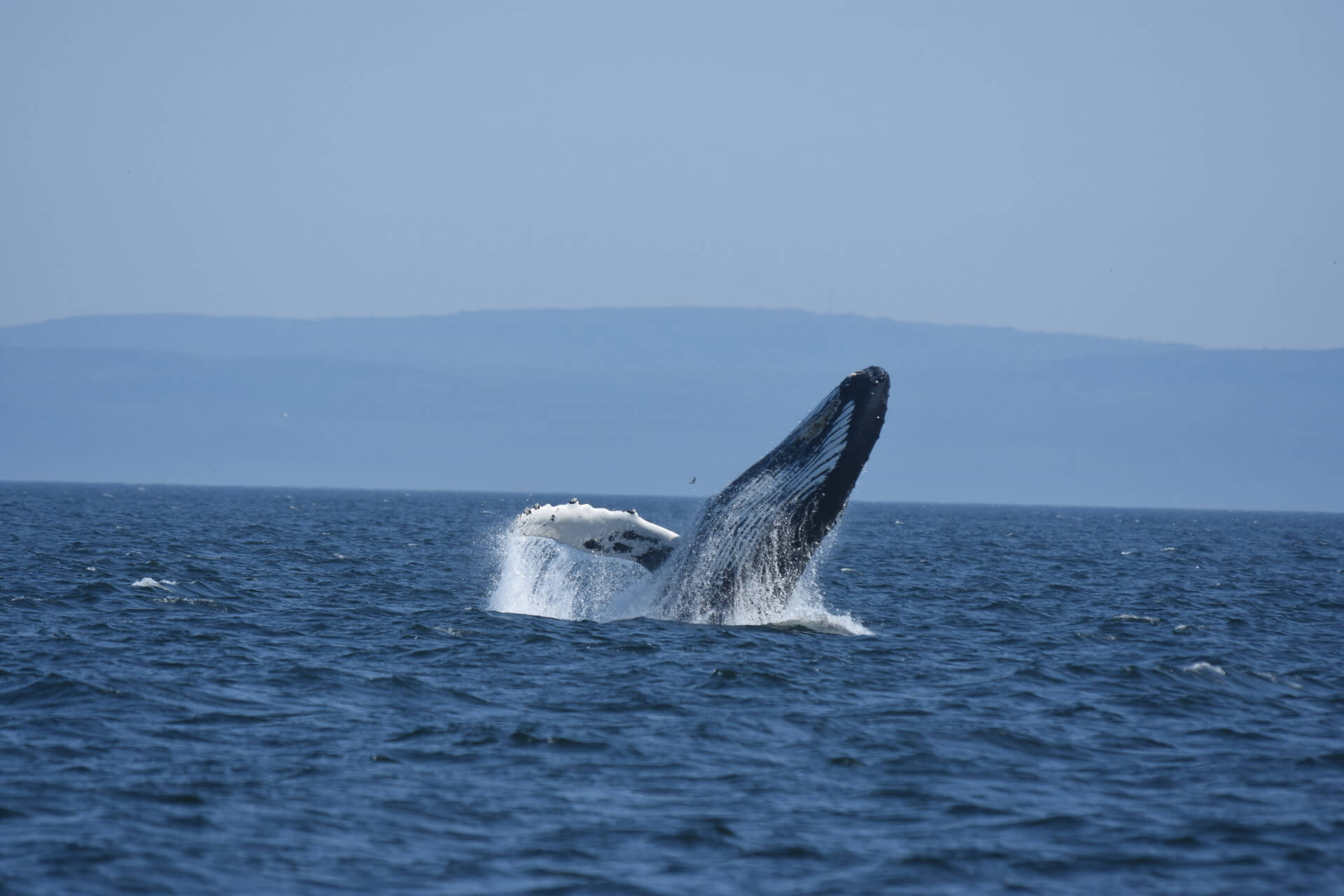 Whales also have an intrinsic value that no economic value can be attached to. © GREMM