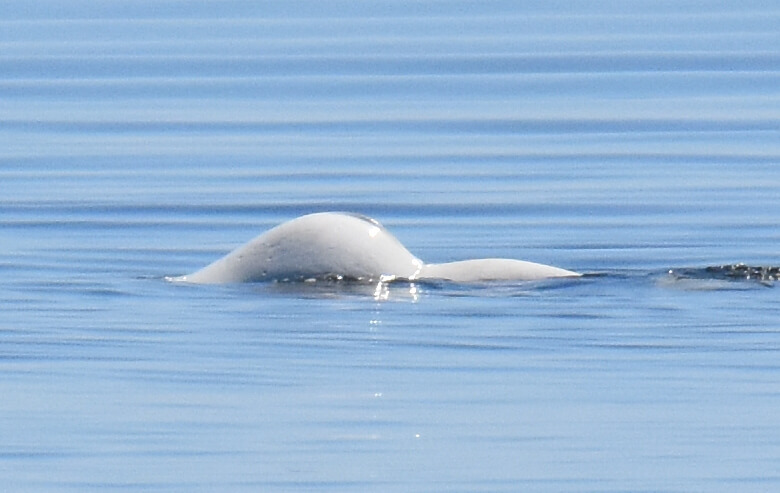 The beluga Pascolio was spotted during the Easter weekend! © Renaud Pintiaux (Archives)

On Saturday, while scanning the Estuary through her binoculars, one local resident saw a funny-looking white spot from the rental condos in Essipit. It’s a beluga, and it has a deformed and easily recognizable spine. This is DL0003 a.k.a. Pascolio, a well-known female in the region. “Her crooked spine was easy to notice,” relates the observer.

And she’s not the only one to have witnessed ‘sea canaries’ over the long Easter weekend. On Monday, wildlife photographer Renaud Pintiaux takes advantage of his day off to stand post with his photo equipment at Cap de Bon-Désir. On this dreamy morning, he spots around 40 belugas between the waves, some getting close enough to the shore to allow him to capture a few superb shots. 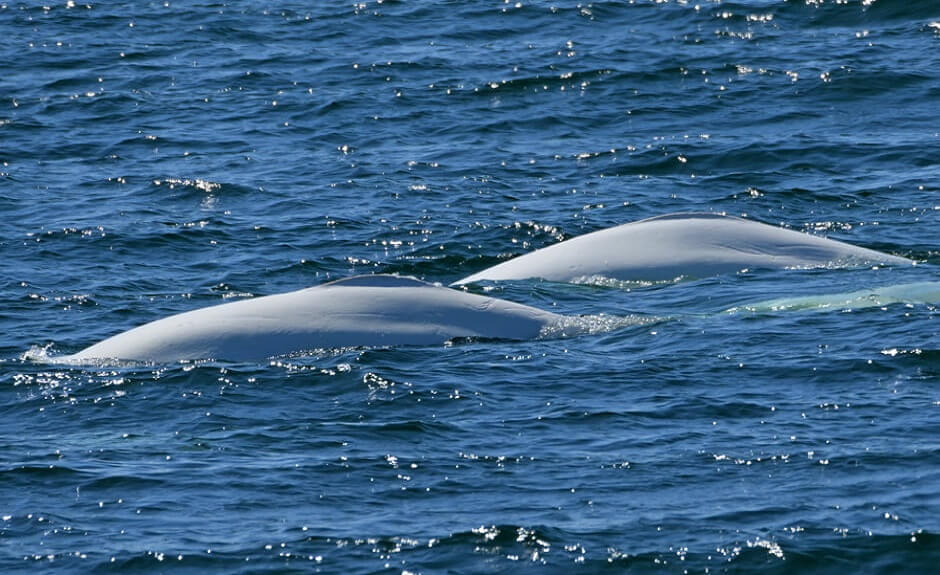 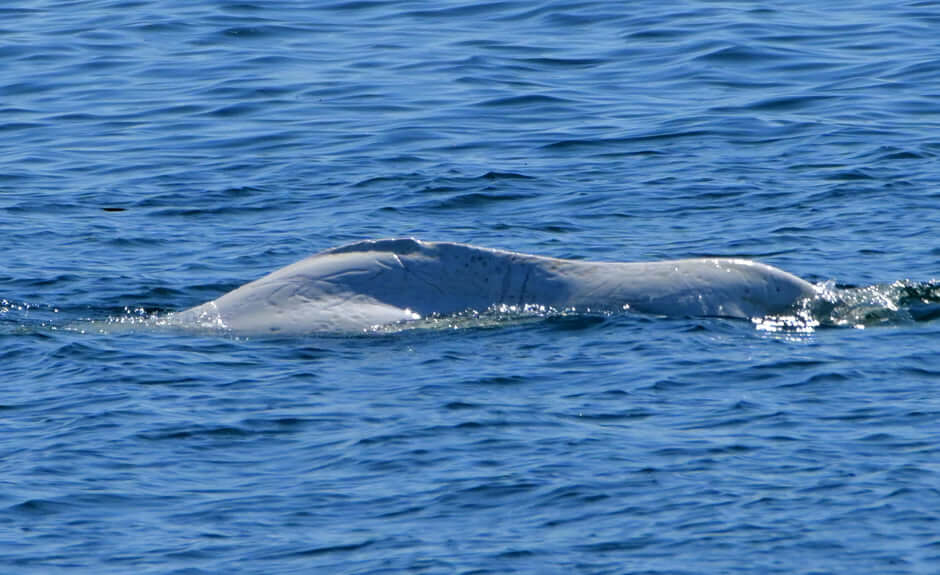 Will we be able to identify this individual soon? © Renaud Pintiaux

A symphony of breaths

But the photographer didn’t just see belugas. In the distance, he catches sight of a minke whale… as well as his second humpback of the year! After a few breaths, the humpback disappears below the surface and displays the underside of its tail. Despite the distance, its colour pattern is discernible enough to allow for an ID. This individual is H590, a.k.a. ‘Piranha,’ a well-known female to MICS that is usually observed in the Mingan region. Last year, she was observed for the very first time in the Estuary… with a calf in tow! Should we expect to see her again this season in the Saguenay-St. Lawrence Marine Park? 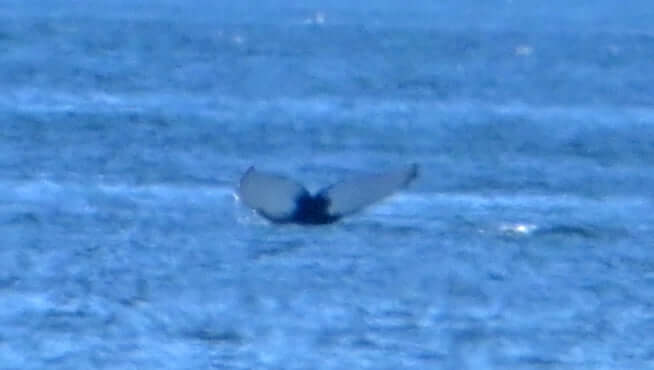 Despite the distance, it was possible to identify this female humpback whale, which is H590, known as "Piranha". © Renaud Pintiaux 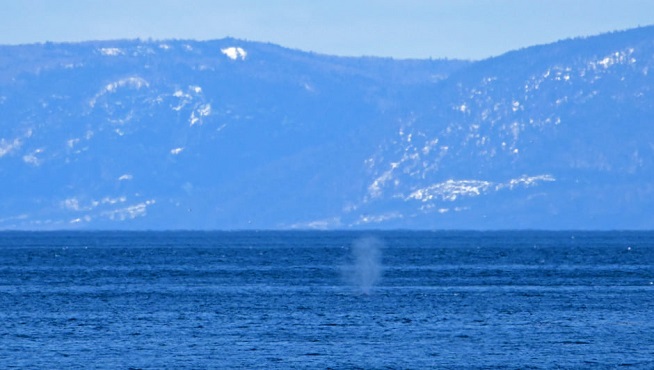 The spout of a giant! © Renaud Pintiaux

In the Port-Cartier region, on Thursday, April 14, mariner Jacques Gélineau was finally able to set sail for the first time this spring. And this sunny day marked an excellent start to the season for this cetacean lover: As he was rounding Ile Manowin, a minke whale pierced the surface near his boat. “She’s swimming toward us!” exclaims the navigator on the phone as the animal can be heard blowing in the background. Grey seals, harbour seals, harp seals and gannets also punctuate his inaugural outing on the water. Three days later, two harbour porpoises caught his eye. 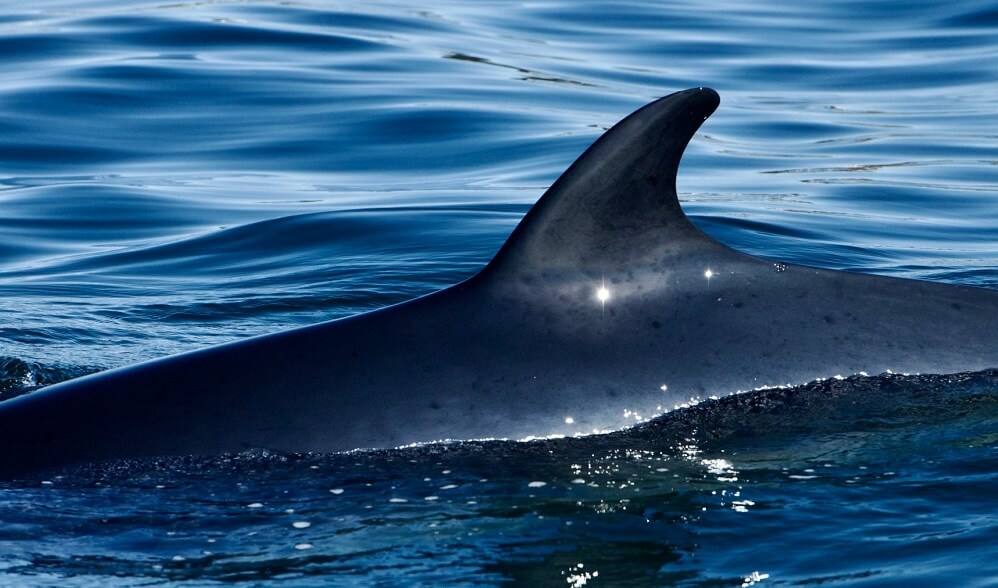 Not too far from there, in Franquelin, a local resident reports the presence of a fin whale. Also in the same sector, an observer sends us an enthusiastic message a few days later from Pointe-à-la-Croix. “Finally! A minke whale! It came in from the west.”

This weekend, one woman had the opportunity to admire a large group of harp seals swimming off Penouille. Among them are a few first-year whitecoats. “They were drifting toward the edge of Gaspé Bay,” she tells us. A resident based in the Gaspésie town of Saint-Siméon was also visited by a fin whale. Lastly, harbour seals were present at Sandy Beach, while at Pointe-Saint-Pierre, grey seals have been observed daily.