On the lookout for big blasts

The blast of a fin whale is visible from far away. © GREMM

Friday, May 28: It’s barely the crack of dawn on the dunes of Tadoussac when Laetitia from the Tadoussac Bird Observatory  (website in French) spots them. In the golden morning light, not one, but two humpback whales are swimming offshore, in the heart of the Marine Park. One of them even launches itself into the air in a masterful breach. Is this the debut of the whale-watching season?

Just one hour later, again off the coast of Tadoussac, a huge blast erupts. The straight column hovers over the water surface for a good ten seconds or so. Is it a fin whale, perhaps the same individual as the one spotted last week from Cap de Bon-Désir? It’s hard to say from such a distance. Some spouts are particularly recognizable, such as the right whale’s V-shaped blast or that of the sperm whale, which angles forward and to the left. In the St. Lawrence, a tall, straight blast will generally be associated with a blue or a fin whale, while humpbacks tend to have a more balloon-shaped spout. But out on the water, not everything is so straightforward, and a simple gust of wind can easily mislead the observer.

On the other side of the river, an observer in Gaspé is thrilled after weeks of watching for big spouts: “Sightings at last!” she writes. A humpback between Manche-d’Épée and Gros-Morne and then a feeding minke whale, which performed a half breach.” Slightly farther afield, off Grande-Vallée on May 30, a fin whale is observed 250 metres from the coast, heading east. The observer notes intervals of up to 37 seconds between breaths. After taking a few breaths at the surface, this huge cetacean can dive for up to 25 minutes. In Gaspé Bay, two humpbacks are also the joy of the season’s first whale-watching cruises.

But it’s not just big whales that inhabit the St. Lawrence! Smaller cetaceans generally do not have a visible spout. This does not mean that they don’t breathe, but simply that they expel less air, which quickly dissipates into the ambient air. Fortunately, we can still see and identify them by their backs.

Off Saint-Irénée, small clusters of white backs regularly pass by, much to the delight of local residents. At Cap de Bon-Désir, it’s minke whales galore, with this species being recorded there almost daily. In Les Bergeronnes on Saturday the 29th, one minke whale and two belugas are reported swimming toward Tadoussac. On the south shore, in Cacouna, an observer notes the presence of a minke whale and a good number of belugas.

On May 31, a group of pilot whales is seen between Saint-Anne-de-Portneuf and Sept-Îles. This is already the third record of this inconspicuous, rarely-observed species in the past few weeks in these parts of ​​the St. Lawrence, which is rather unusual.

Off Sept-Îles, navigator Jacques Gélineau is starting to lose hope of seeing any large whales. He’ll have to settle for the presence of a few seals, nearly a dozen minke whales and at least a hundred porpoises. The harbour porpoise is the smallest cetacean in the St. Lawrence. Although its breath can’t be seen, it can be heard.  The rapid, surface-grazing movement of its back is highly characteristic; we call this swimming style “porpoising”. 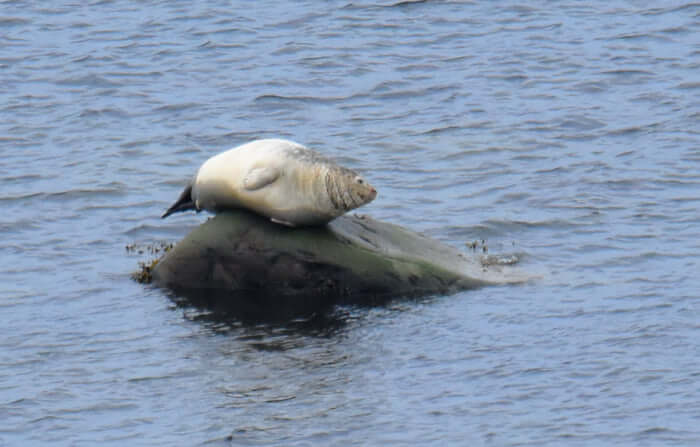 A harbour seal on its rock © Renaud Pintiaux

It’s not a breath but rather a strange-looking silhouette that captures the attention of residents in Les Escoumins on May 28 and again on May 30: a white back with two camel-like humps. Néo! With its deformed back, this beluga has been known to GREMM since 2005 and is often observed swimming alone. 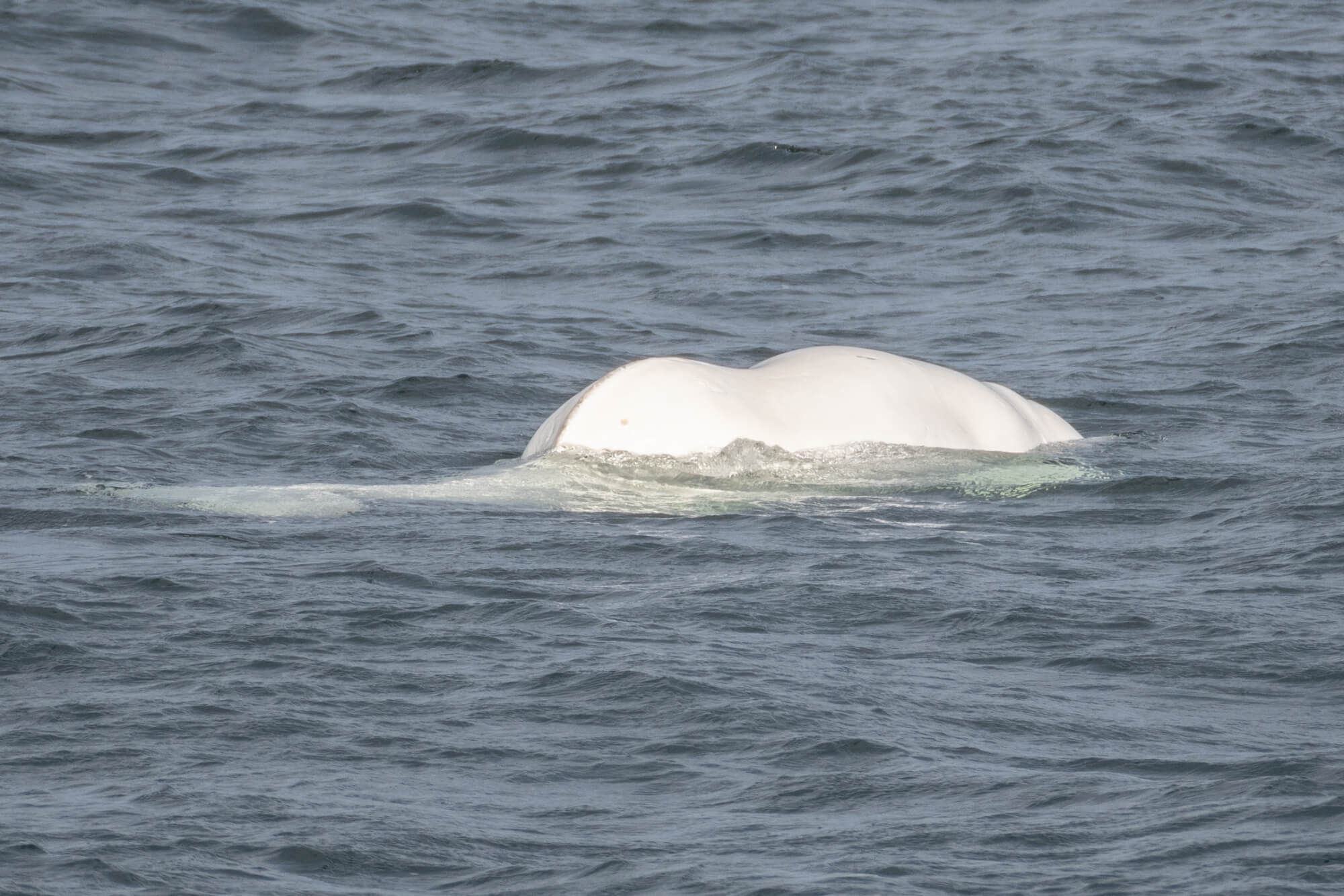 The solitary Néo has unusual behaviours for a beluga. © David Turgeon, May 28, Les Escoumins

There are the species that we want to see and there are those that we dread. In the Gulf of St. Lawrence, North Atlantic right whales are gradually arriving. This endangered species is particularly vulnerable to entanglements in fishing gear, so to protect them, many measures have been put in place by the Canadian government. One of these is the closure of fishing areas where right whales have been spotted. In mid-May, the sighting of two right whales had resulted in the closure for 15 days of certain lobster fishing sectors northeast of the Magdalen Islands. This was a tough pill to swallow for the lobster fishermen, who were just kicking off their season. These sectors were able to reopen this week.

Over the past week, Fisheries and Oceans Canada surveillance teams have recorded around 20 right whale detections between the Magdalen Islands and the Gaspé Peninsula. The total number of individuals in the Gulf is uncertain, but amongst them is one of the 17 calves born earlier this year. Will one of them venture into the Estuary like Wolf did last year? Time will tell. 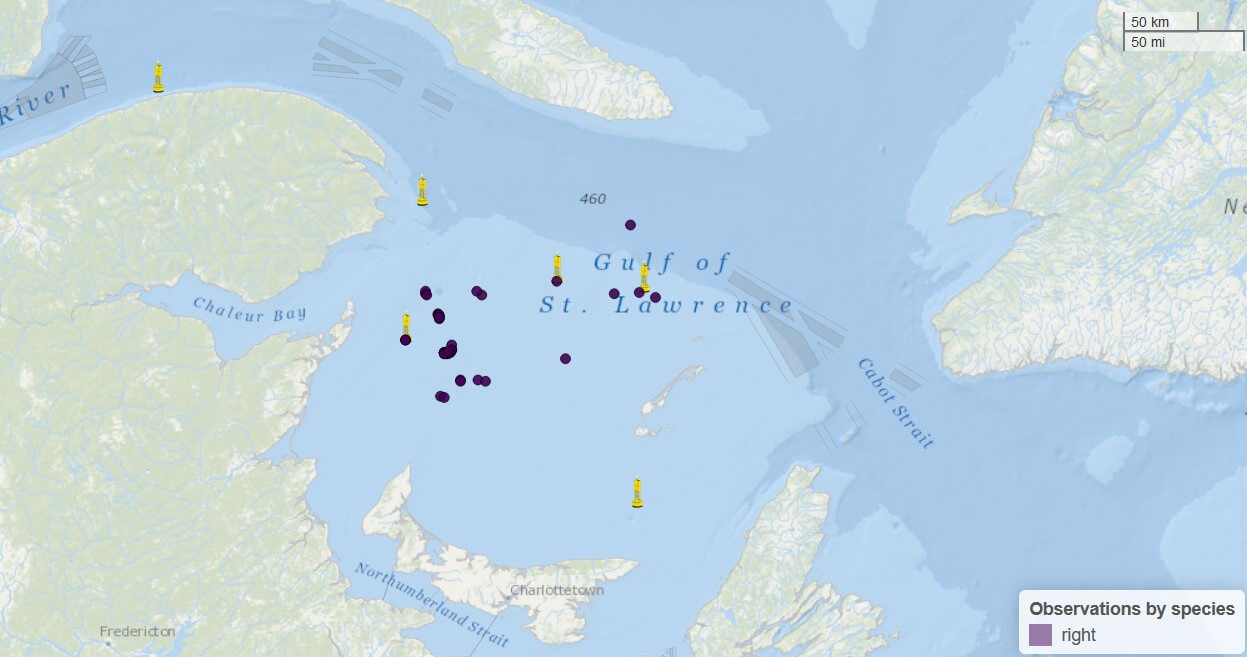 Visual and audio detections of right whales in the Gulf of St. Lawrence between May 26 and June 3. © Whalemap
Observation of the Week - 3/6/2021