Ode to the next generation, the deformed and seafaring nomads 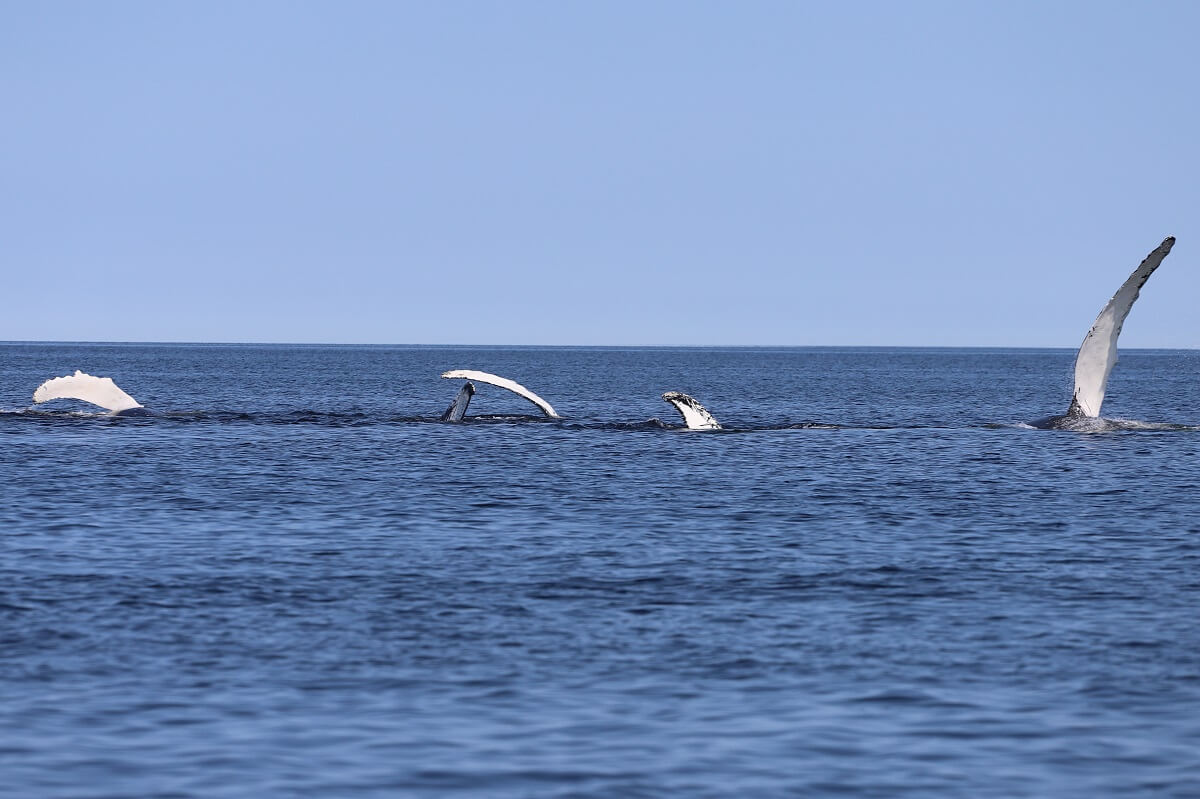 Tic Tac Toe, her calf and H915 in the middle of a ballet © René Roy

The sun is setting over the beach in Les Bergeronnes and the sky is a palette of pinkish hues. With my feet planted in the wet sand, I watch the ebbing tide gradually unveil the flats when suddenly, just behind a line of rocks, an immense white and pink balloon seems to emerge from the water and then pivot, revealing a dark grey back and a sickle-shaped dorsal fin. “It’s minke whale time,” comments my friend sitting next to me. For the past three days, every time the tide goes out, she has seen minke whales feeding at the edge of the flats. Surely they are taking advantage of panic-stricken fish in search for deeper water.

The feeding manoeuvres of minke whales have always impressed me. Taking in hundreds of litres of water with each gulp, they can stretch their ventral folds to the extreme, creating the impression of having swallowed a hot air balloon. And the rush of blood to their throats adds a surprising flash of colour. In the heat of the moment, they sometimes emerge from the water with their bellies in the air or perform a series of frog-like half breaches. It is not unusual for observers to contact us after watching a feeding minke whale, concerned about the animal’s health.

For many, the smallest of rorquals is less worthy of interest than its fin, blue or humpback cousins. Nevertheless, it remains an imposing wild animal, tipping the scales at up to 10 tonnes. While paddleboarding near Rivière-au-Tonnerre, two outdoor enthusiasts are in awe following their encounter with two minke whales. “They were foraging all around us!” They came in so close that I was a little scared!” exclaims one of them.

During a Sunday outing in the Mingan Archipelago, mariner Jacques Gélineau crosses paths with a single humpback as well as a nearly a dozen minke whales. But he is not disappointed either: “For me, a minke whale is every bit as interesting to observe as a large rorqual. For the whale-watchers I take out on the water, this is sometimes the first cetacean they see in their life, so they are just as impressed and excited as they would be if it were a blue whale.” 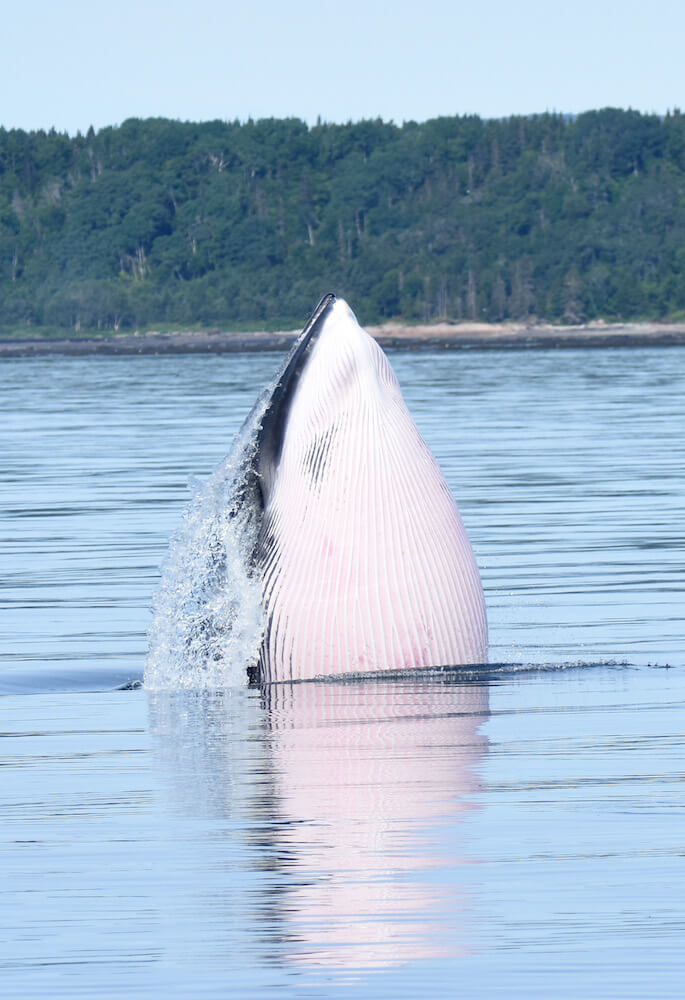 In any case, we can count on them to lead the show. Along Quebec’s Côte-Nord region, minke whales are everywhere, hugging the shoreline and approaching docks. We have received reports, for example, from Baie-Comeau, Pointe-au-Maquereau, Sept-Îles or even Pointe-des-Monts. On Wednesday, July 14, a minke whale frolics at the mouth of the Saguenay Fjord, much to the delight of visitors lined up to enter Tadoussac’s Marine Mammal Interpretation Centre (CIMM).

Life in blue or grey

No hungry rorquals for our observers on the south shore, but rather white whales galore. “The belugas are back, and they’re everywhere!” enthuses one observer. After a week with relatively few sightings, they are once again present in numbers near the docks of Rivière-du-Loup and Cacouna. On Saturday and Sunday, an odd-looking individual joins the group consisting of mothers and juveniles. The grey individual is completely hunchbacked. When it comes to the surface to breathe, observers think they see two distinct backs, but it is actually an individual with a deformed spine due to lordosis or scoliosis. A number of “deformed” belugas frequent the waters of the St. Lawrence and the Saguenay. This characteristic often makes them easier to identify. 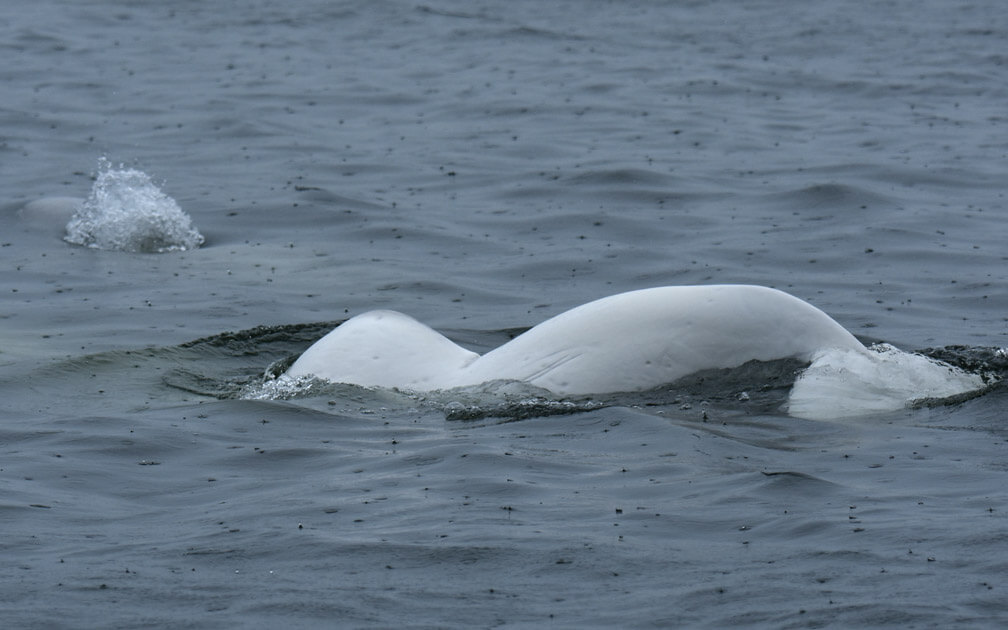 Pascolio is one of the "humpback" belugas of the St. Lawrence. Her silhouette often surprises observers. © GREMM 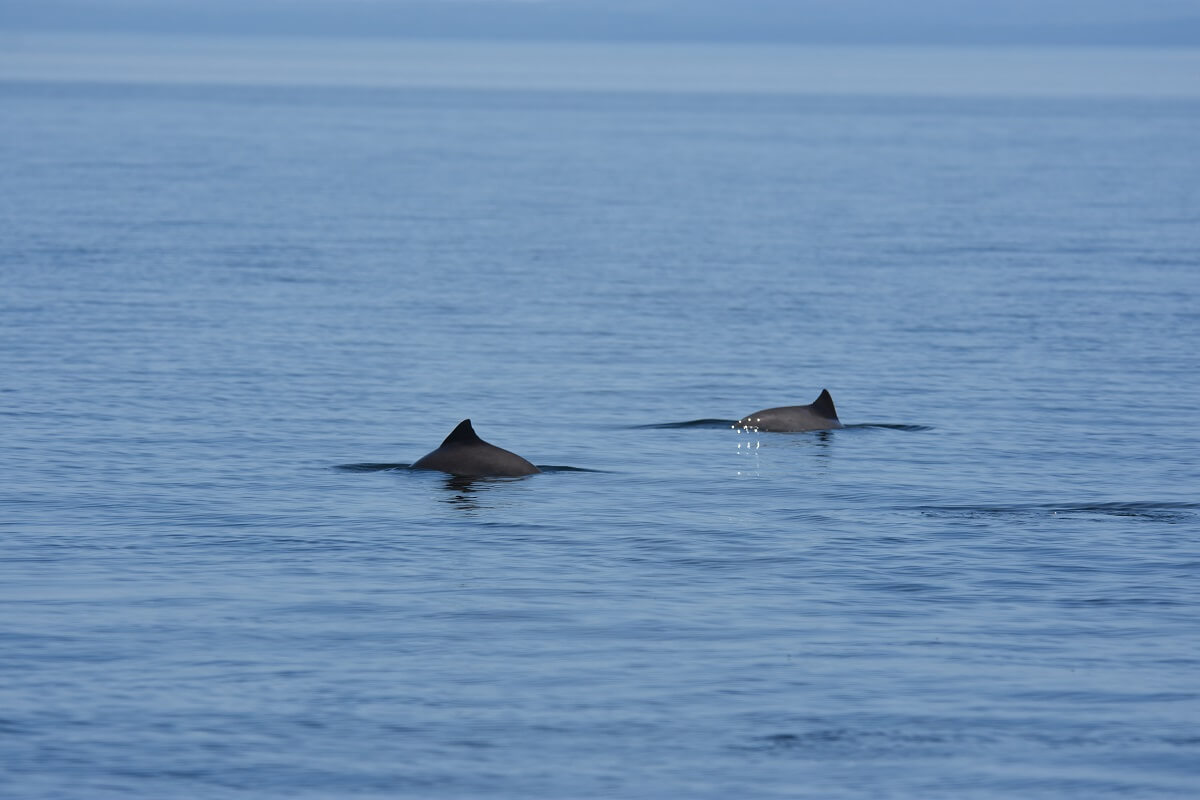 Harbour porpoises are the smallest cetaceans to frequent the estuary. © GREMM

On July 8, René Roy, collaborator for the Mingan Island Cetacean Study (MICS), spots his first blue whales of the season north of the Gaspé Peninsula, off Cap-des-Rosiers. The three stealthy individuals prove difficult to approach. “They were moving quickly and would move away as soon as I drew closer,” states René, who nevertheless manages to identify the male Lucanus, an individual he considers a regular in the region.

Magical sighting off the coast of Newfoundland: two recreational boaters are astonished when they happen upon a group of about fifteen killer whales.

Orcas, orcas, orcas! They’re everywhere this year. A school principal and her better half went fishing yesterday and came across an amazing pod. @CStokescbc and I look at the increase in sightings and talk to an expert about just what is going on. Checkout Here & Now 6-7 pm. pic.twitter.com/iBw4T06kg2

The first humpback whale to be observed in the Saguenay-St. Lawrence Marine Park, the infamous Tic Tac Toe caused quite a stir in mid-June when she arrived with a newborn. Since then, many other humpbacks have come to feed off Tadoussac and Les Bergeronnes, but our star seems to have vanished. Where has she gone? Surprise! On Tuesday, she is observed by René Roy near Baie des Anglais in the Baie-Comeau region. She is accompanied by her calf and an “escort”. This is the term used for an adult individual that seems to “tag along” with a female and her calf. Despite being frequent, this phenomenon remains poorly understood; surprisingly, the escort is often another female.

René Roy recognizes this escort: it is H915. Interestingly, this humpback was photographed on June 17 off Tadoussac, then observed on July 8 near Cloridorme before reappearing on July 13 off Baie-Comeau. A journey that may seem long to a human, but not so much for a whale, for which the St. Lawrence is but a tiny cul-de-sac in the ocean.

Speaking of wide-roaming whales, the female humpback Gaspar (in French), also known as BBR in the Gulf, has just arrived in the Saguenay-St. Lawrence Marine Park. She had been seen with her calf in Gaspé a fortnight ago. She joins 5 or 6 other humpbacks in the Estuary as well as ten or so fin whales that have been entertaining cetacean enthusiasts. Beyond Gaspé Bay as well, the season is in full swing: not a day goes by without cruise-goers crossing paths with multiple fin whales and humpbacks. Obviously, small cetaceans such as minke whales and porpoises are also present. 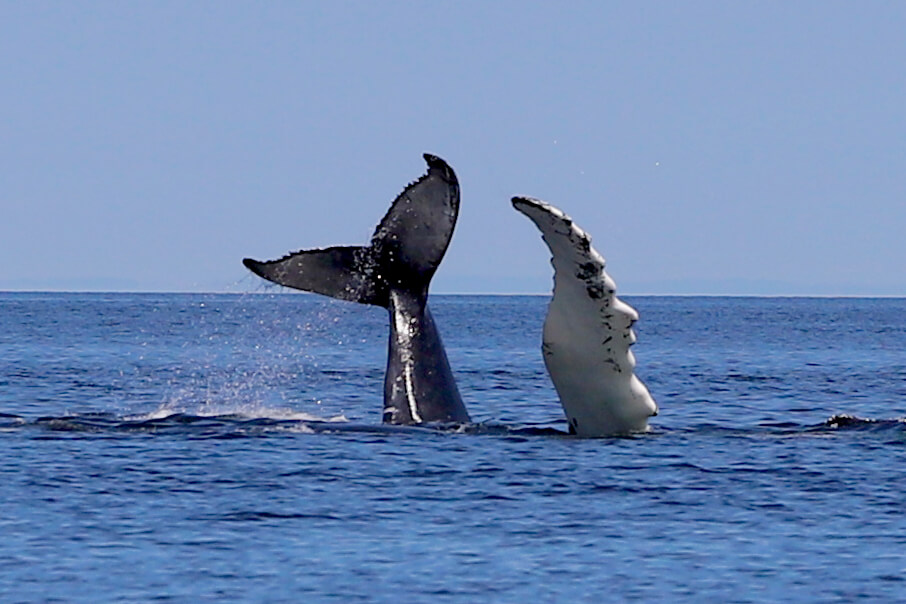 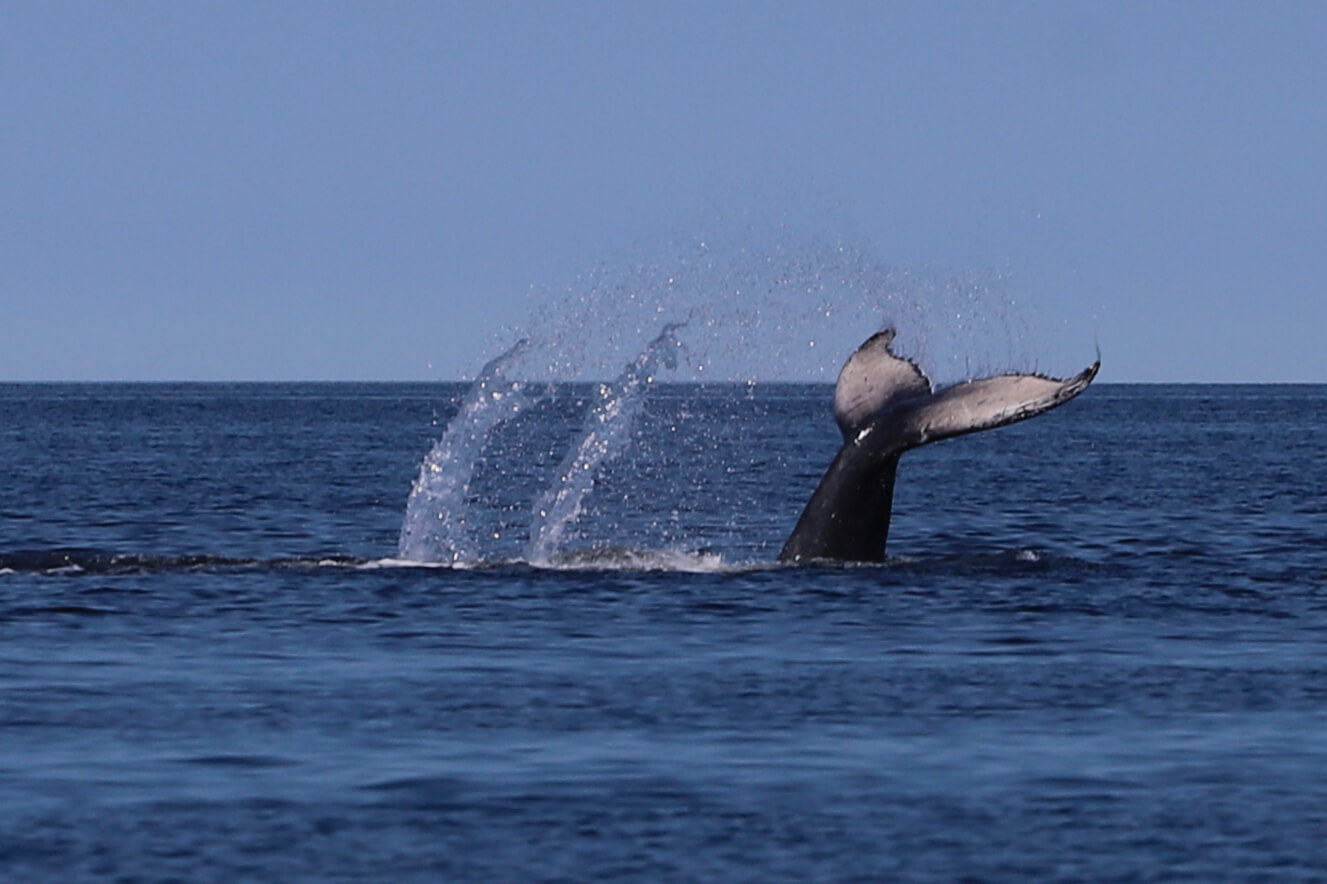 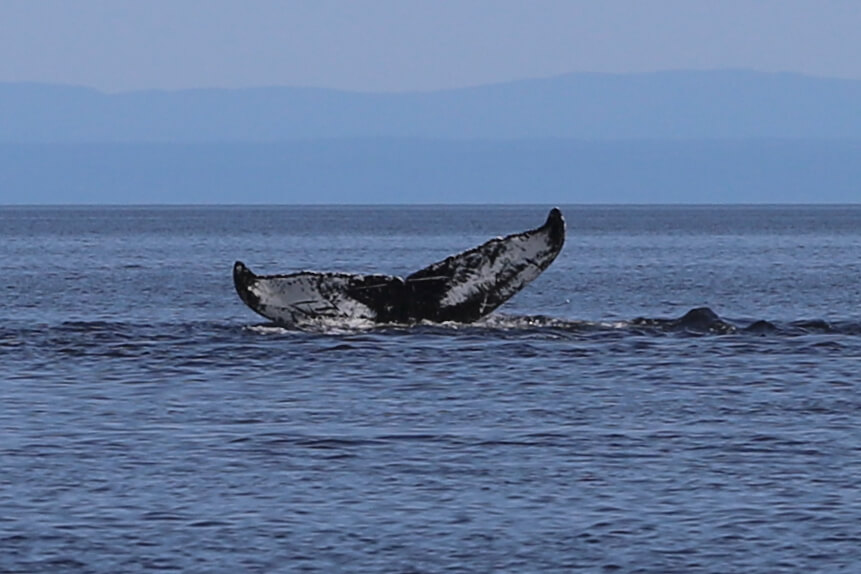 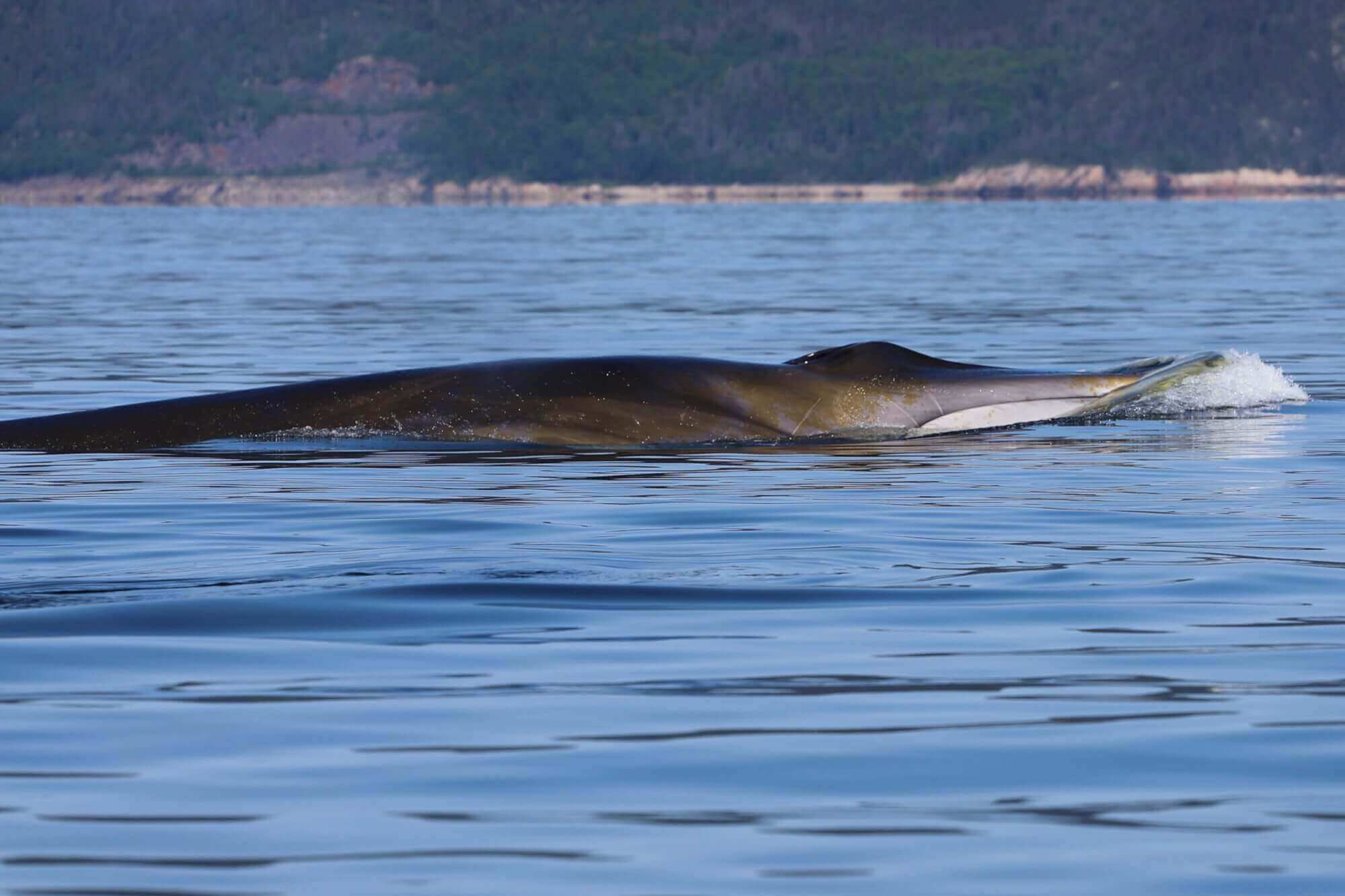 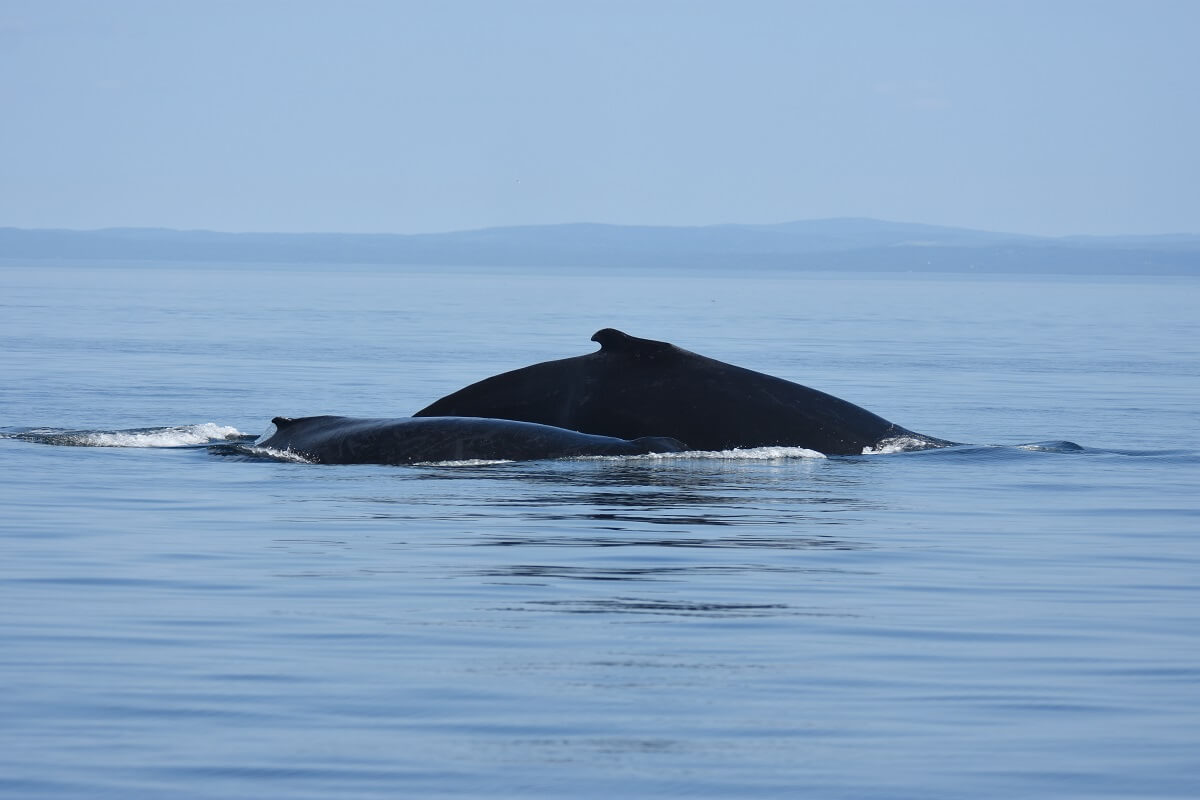 Gaspar and its calf © GREMM

All photos presented from René Roy were taken as part of a photo-identification mission under permit number QUE-LEP-004-2021.