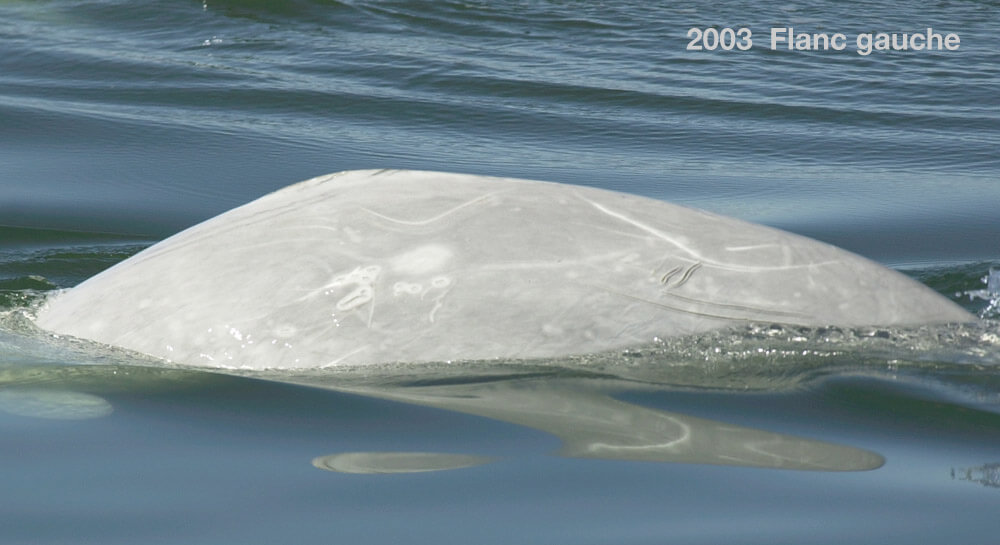 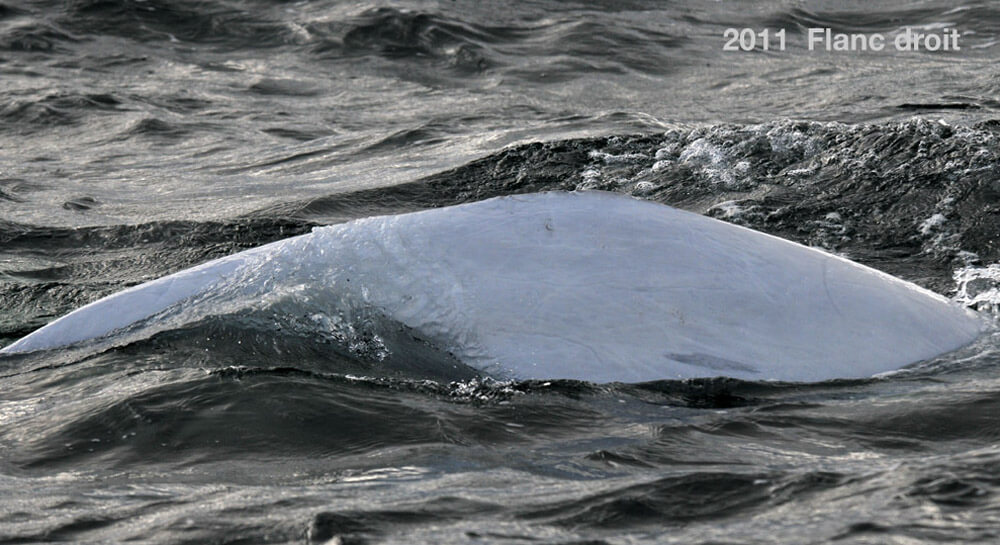 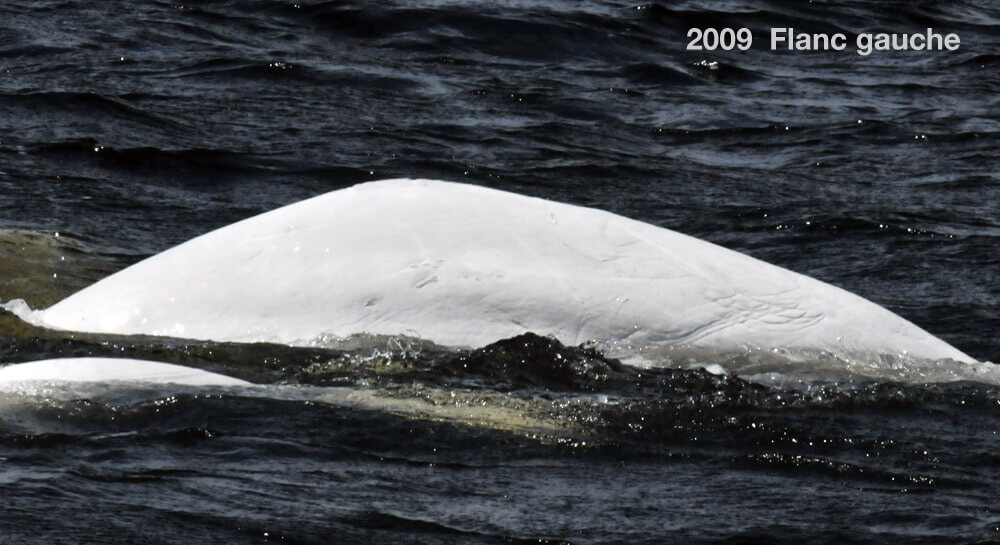 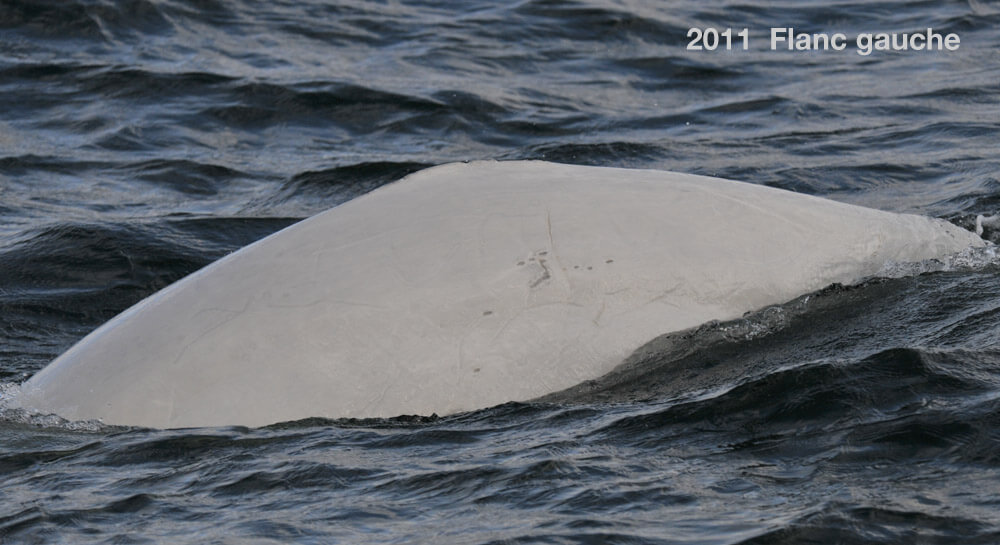 We first encountered Fayo in 2003, at which time he was still gray, but very pale. We didn’t see him again for 5 years, but when we photographed him again in 2009, Fayo was still gray. In 2011, we noted that he had turned white. Belugas fade from gray to white in colour between the ages of 12 and 16, meaning that Fayo would have been born around 1995.

Fayo’s associations suggest that he is a male. Indeed, there exists a sort of sexual segregation in belugas. Bulls and cows live separately and frequent different sectors, particularly in summer. Three male networks are known, two of which ply the waters of the Saguenay Fjord and the head of the Laurentian Channel while the third one, nicknamed the “Downstream Boys”, uses the head of the Laurentian Channel as well as the downriver portion of the Estuary. Even if their territories overlap, individuals from one network seldom come into contact with males of other networks.

At the present time, we do not know which male network Fayo belongs to or who his faithful companions are. When they reach adulthood, males tend to form stable groups of companions. These associations, which are established gradually in adulthood, may play an important role in belugas’ reproductive lives.

In December 2020, the Mongeau Family adopted DL2071 and named him Fayo.

How Fayo’s story unfolds will teach us volumes on the evolution of belugas’ social lives. For example, which sector will he favour as he grows older? Who will his lifelong companions be? By better understanding how belugas live, we will be able to better protect them.

Off the coast of Les Escoumins, we’re aboard the BpJAM , the small inflatable watercraft we use for our research. By 3:30 in the afternoon, the waves are rocking our craft and we’re no longer observing any belugas in the vicinity. We begin our return to our home port of Tadoussac. It is at this moment that we see nearly a dozen belugas bunched together. We begin photographing them. Beyond them, there are other groups of belugas. We approach them and discover a herd of 70 to 80 individuals. After photographing the individuals – including DL2071, Vita and DL9050 – we fly over them with a drone to film their activities. Preliminary analysis of the videos will take place next winter, after which they will certainly be revisited over the years to come in the context of different projects. We ultimately spend another two hours on the water before returning safely, exhausted but happy with the data we were able to collect.

We’re on board the Bleuvet in the company of researcher Véronique Lesage from Fisheries and Oceans Canada’s Maurice Lamontagne Institute. Today we will attempt to tag a beluga in order to record its calls and track its behaviour. We are sailing south of the Prince Shoal Lighthouse in the company of a herd split into four or five groups. Amongst the belugas present, we identify DL2071. As one individual approaches the Bleuvet, we reach out a pole with a tag loaded onto its tip. Bull’s-eye! Our senior technician Michel Moisan successfully tags the animal at 9:23. The beluga strays from the rest of its group while the other animals disperse as well. Now the real challenge begins: we must maintain visual contact with the animal at all times. Whenever it dives, we try to estimate where it will resurface. The waves are growing larger, making our job that much harder. The herd composition changes, with the animals now split into three groups, from the middle of which emerges the tagged beluga. It rests in one spot at the surface, a behaviour we refer to as “logging” due its resemblance to a floating log. Surprise! Without warning, at 10:24, the tag falls off the beluga’s back. We rush to pick it up and subsequently extract the precious data it contains.

Off the coast of the town of Trois-Pistoles is the GREMM’s research boat: the Bleuvet. Around us are between 100 and 120 belugas, nearly all of them adults. Judging by the size of the animals, we assume that the herd is composed entirely of males. The belugas are scattered over a 1-kilometre radius. DL2071 passes close by amid a group of eight stocky adults.

At one moment the animals seem to be moving in every direction, then appear to want to congregate, gravitating toward the mouth of the Fjord, only to scatter again! They are playing hard-to-get today. Nevertheless, we spend over three hours in their company. We return to port armed with three biopsies and hundreds of photos, which we will use to identify and re-identify individuals in the herd.