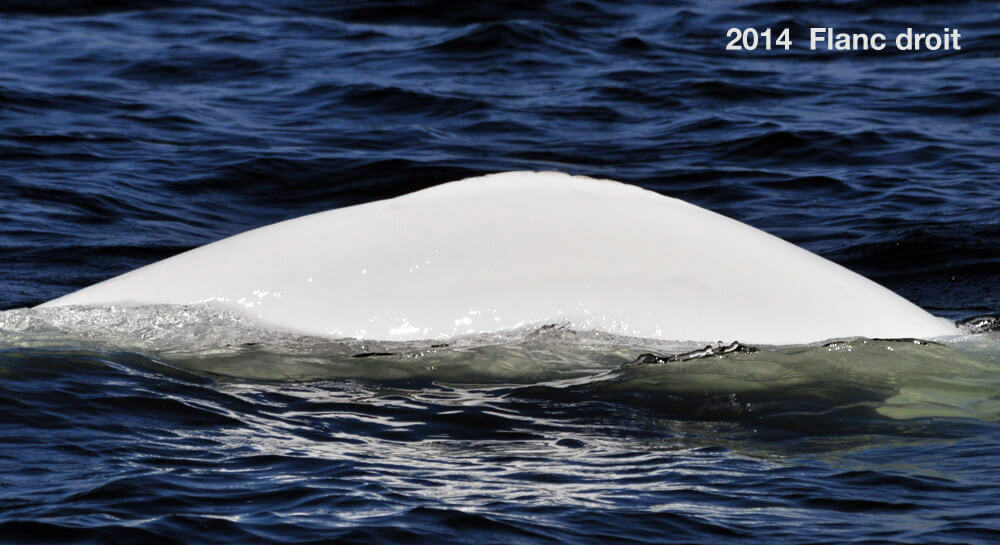 Candy C can be identified by the deformity in her spinal column, which creates a sort of dip in front of her dorsal crest. 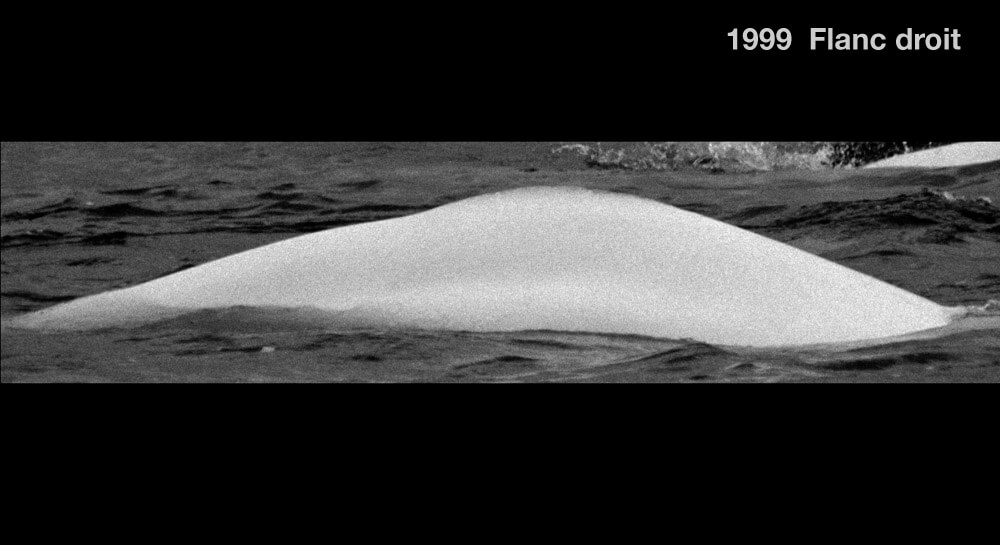 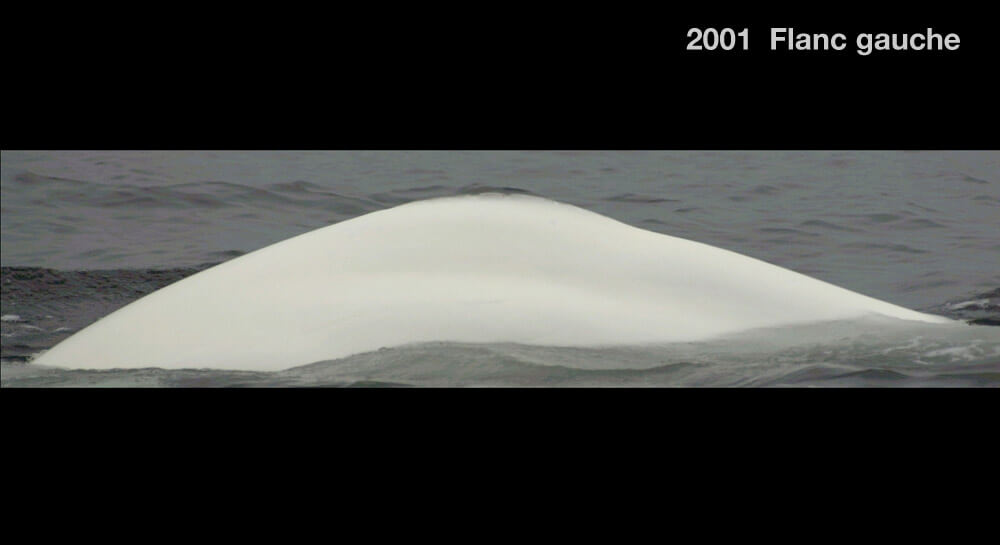 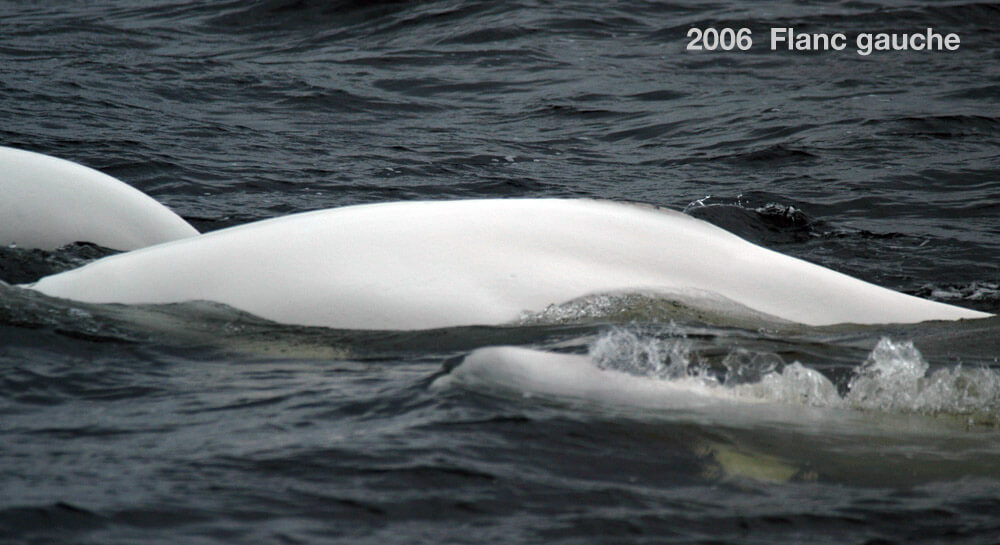 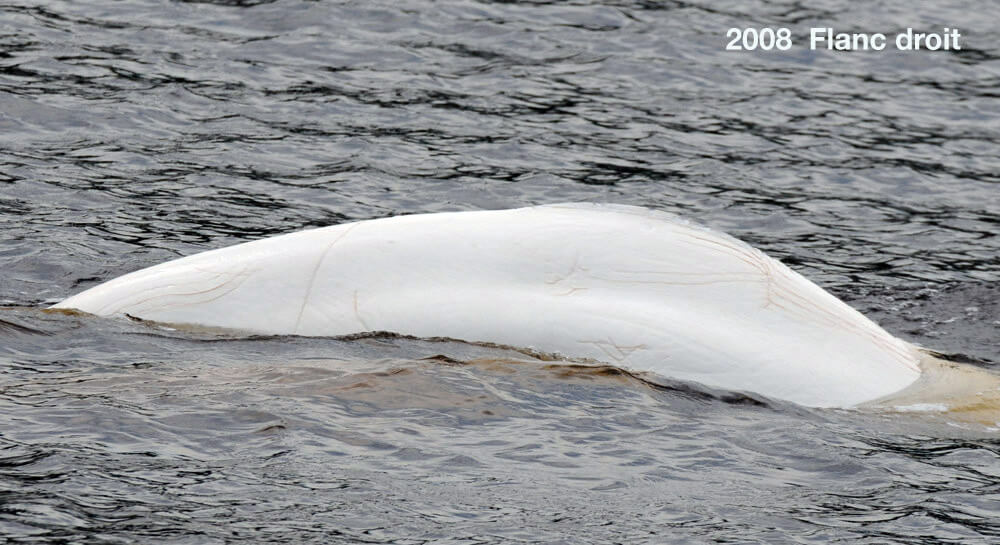 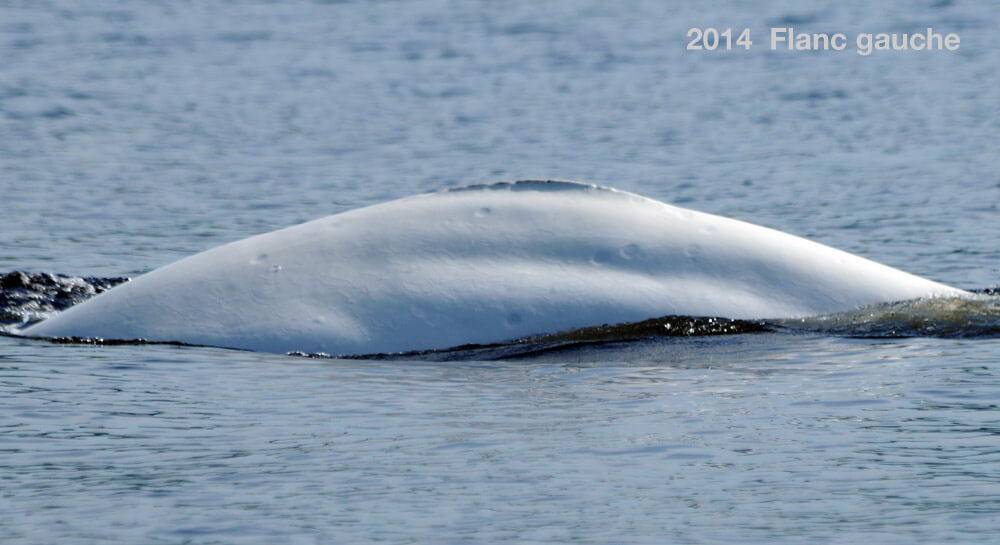 The first time she was observed, Candy C was already white. Belugas fade from gray to white in colour between the ages of 12 and 16. This would mean she would have been born before 1985.

On July 4, 2006, the results of the DNA analysis of a tiny piece of skin taken from her back – known as a biopsy – confirmed that Candy C is a female. Previously, we had already suspected that Candy C was a female of the Saguenay community based on her associations. Within their summer range, females form large communities in which they care for newborns and young. These communities, the formation of which is partially based on matriarchal lineages, are faithful to traditional territories and exchanges between them are uncommon.

Candy C has been regularly observed in groups with very young belugas, though we have yet to see her with a calf. Our observations have not yet allowed us to determine with certainty whether or not Candy C is a productive female, in other words capable of producing offspring.

Today is our first outing aboard the Bleuvet, our primary research vessel. The entire team is delighted to be back out on the water. With the pandemic, we were concerned about having to cancel this year’s research season, but luckily we were able to obtain our research permit on time. Equipped with our masks, our goggles and plenty of disinfectant, we set off around Île aux Lièvres in the hope of encountering distinctly marked belugas to photograph for ID purposes. We start on the south side of the island, opposite Rivière-du-Loup. There we find only a small group of adults. A beautiful dorsal crest pierces the surface: it’s Candy C. We photograph her and her companions, then decide to continue on our way to find more belugas.

Aboard the Bleuvet, we welcome two new research assistants, Mathieu and Sophie. They are learning to navigate and to make gentle approaches to belugas for our research projects. Because every trip at sea counts, we take the opportunity to do some photo-identification. We follow a herd of about 20 belugas that are heading towards Île Rouge, off the coast of Tadoussac. The camera captures the portrait of Candy C and Pacalou. Some tiny belugas, still grey, come to observe our boat and our apprentice captains must learn to navigate with caution. The herd is back on Île Rouge, one group returns to Tadoussac while another leaves for Baie des Rochers. Another group starts to go around the island towards Basques Island. All groups swim slowly towards their new destination.

The Bleuvet is off the coast of Pointe-Noire, at the confluence of the Saguenay River. A herd of roughly forty animals is swimming idly around the mouth of the Fjord. The herd has a large proportion of young (about 40%). Some of the belugas are starting to make their way toward the Fjord. Overall, the herd is not particularly dynamic and is lingering close to Pointe-Noire. We observe the animals, most of which show few distinctive markings and are thus difficult to photo-ID. However, we do note the presence of DL1585, the only one that is easily recognizable.