AlbioriX is easily recognized by the jagged profile of his dorsal crest, especially toward the rear. New gashes have gradually appeared since 2000. 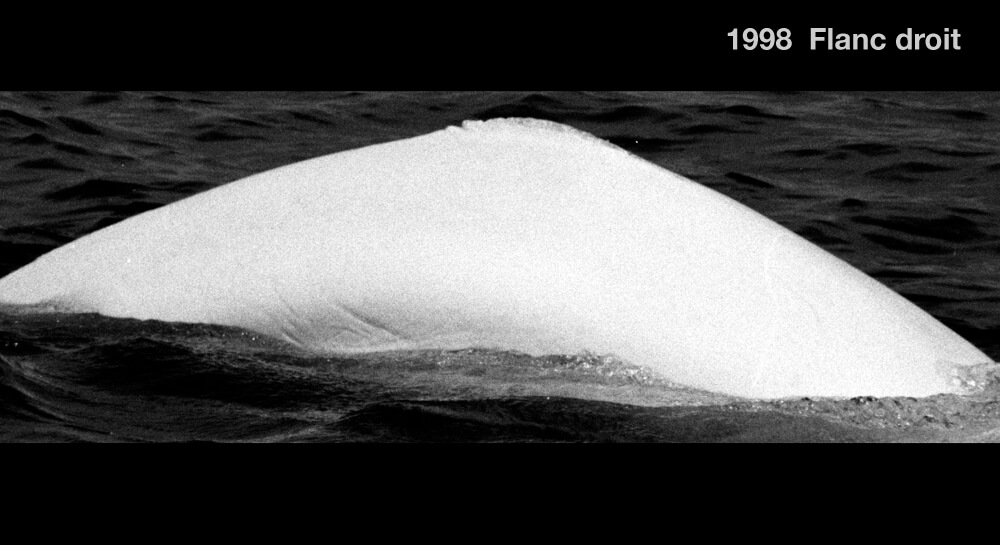 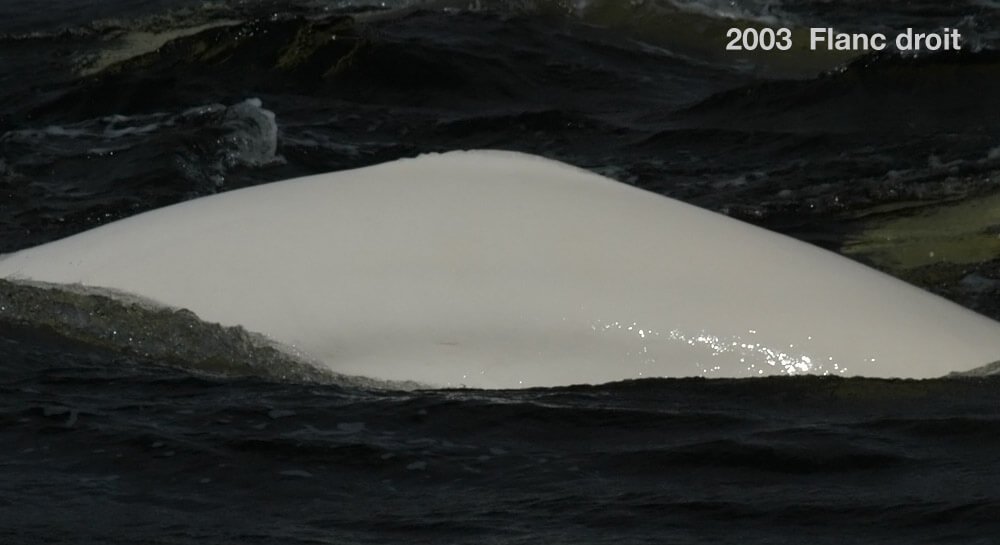 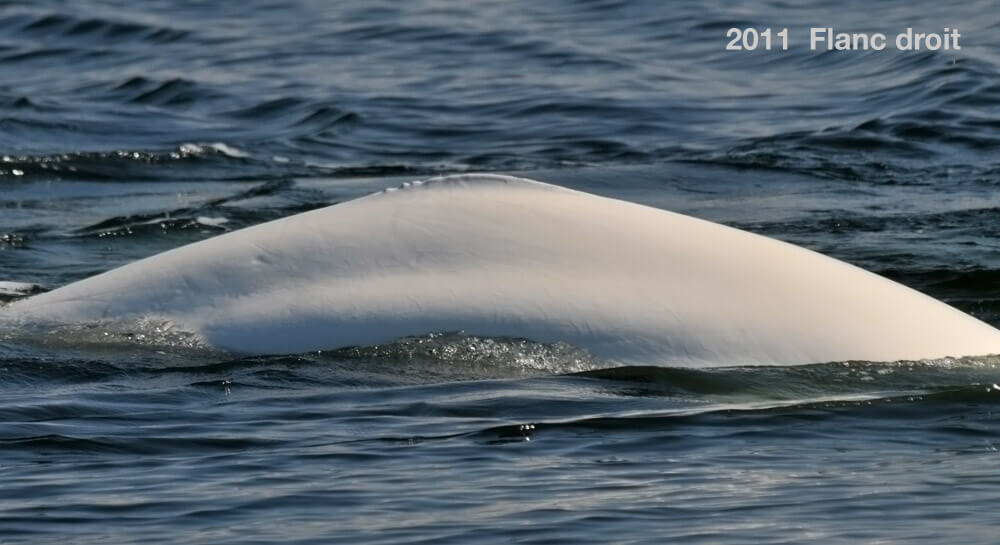 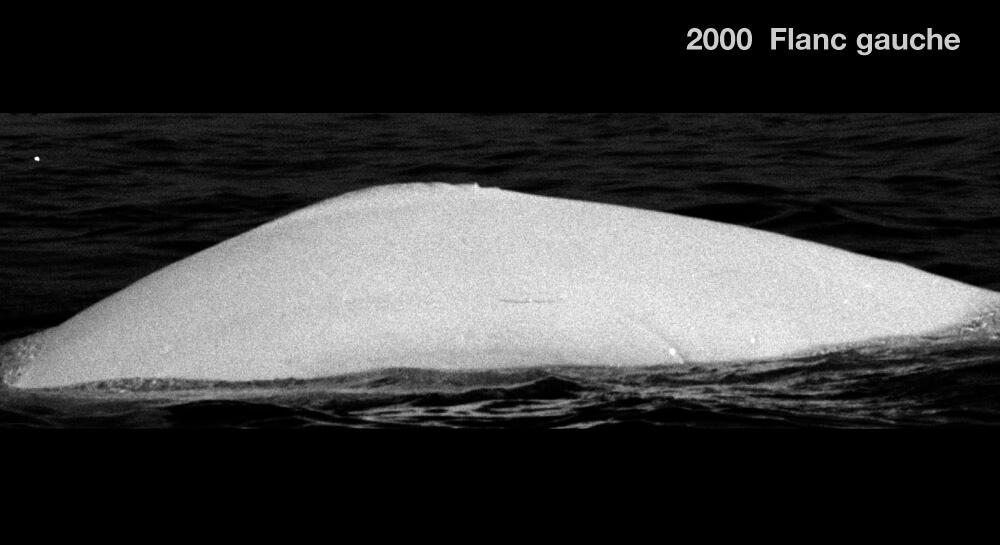 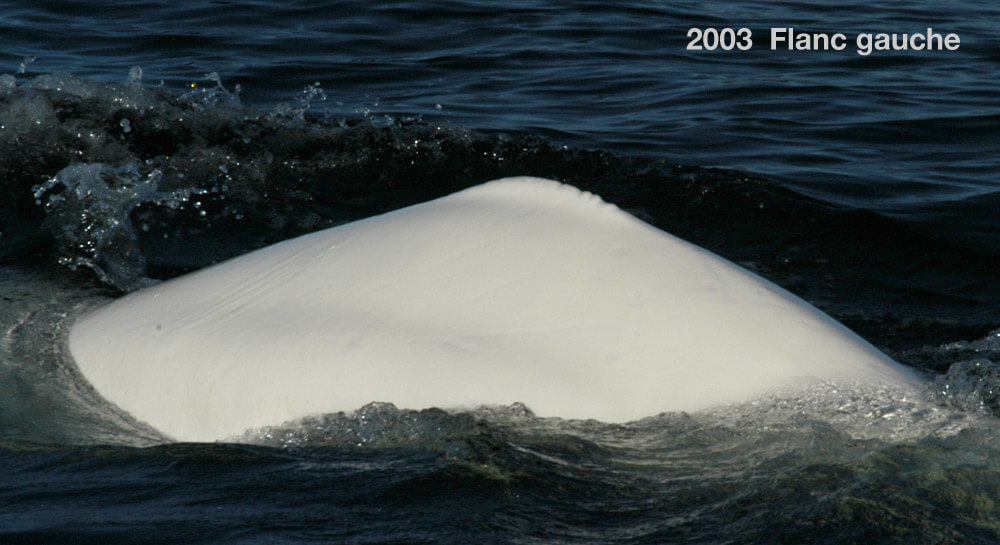 Our first encounter with AlbioriX dates back to 1990. He was already white at the time, which makes the task of accurately aging him somewhat more difficult. Indeed, the main indicator of age is the change in colour, namely the fading from gray to white between 12 and 16 years old. AlbioriX would therefore have been born before 1976.

To date we have observed AlbioriX in different sectors of the summer range. He is regularly spotted in herds made up exclusively of adult males.

AlbioriX’s habits and associations suggest that he is a male. There are two male networks that frequent the Saguenay Fjord, its mouth as well as the portion of the Estuary as far as Les Escoumins. Within these networks, bulls form stable groups of companions. These associations are established gradually and may play a role in belugas’ reproductive lives.

AlbioriX has been observed on a few occasions in the company of males Frimas and DL0243, who belong to one of the two male networks in the Saguenay. Despite the fact that we have known AlbioriX for several years, unlike his companions, we have not yet been able to determine which network he belongs to.

How AlbioriX’s story unfolds will teach us volumes on the evolution of belugas’ social lives. By better understanding how belugas live, we will be able to better protect them.

We cross paths with AlbioriX off the coast of Les Escoumins, in the downstream part of the Estuary. He is swimming in a herd of about 150 individuals consisting mostly of white adults and a few gray juveniles (10%). The herd is split into several smaller groups of about fifteen animals each. We also recognize DL0218, a Saguenay male. The animals are swimming slowly, which makes our work easier. We even manage to perform 14 biopsies in this herd, and the day is still young!

We’re off the coast of Les Escoumins AlbioriX is swimming in a herd of about 90 belugas, all white adults, divided into groups of 5 to 8 individuals. Some animals were dozing off at the water surface. At the end of the encounter, the herd splits up and one group heads farther downriver.

These large but short-lived gatherings consist essentially of males. They are often observed in the downstream sector of the summer range, between Tadoussac and Les Escoumins, an area seldom frequented by females with young. The preference of male herds for this sector might be related to the types of prey found there.

Sometimes it seems that belugas simply want to make our day and gather in groups of “celebrities”. That’s precisely what happened to us that day. We had just left the Tadoussac marina aboard the Bleuvet (our research boat), when we crossed paths with a herd of about fifty belugas calmly moving toward the south shore. The herd consists of adults and juveniles as well as one calf, i.e. a beluga born earlier the same year.

We position our boat at the tail end of the herd to observe belugas that are smaller in size. Since they are white, we know they are all adults, but they could be females. We photograph the white whales and manage to recognize a nice collection of stars from our family album: AlbioriX, Frimas, DL014, DL2228, Nics, Miss Frontenac, DL2453, Or Blanc, DL1328, Al, DL1802, Elle and DL173. It was a constructive encounter that will help us add pages to our album.

We head out to sea today with high hopes, namely to take a few biopsies and/or tag a couple of belugas. We enter the Saguenay, where conditions are often more conducive to these kinds of activities. We spot herd of brawny belugas. Their colouring ranges from grey to dirty white, meaning these individuals are relatively young. The belugas are swimming in disorganized fashion in Baie Sainte-Marguerite, looking like a bunch of adolescents just “hanging out”. As one beluga approaches the Bleuvet, our senior technician Michel Moisan reaches out with a pole at the tip of which lies a radio tag. Just as Michel is about to strike, the beluga dives and exhales a huge bubble that pops at the surface. A few minutes later, another beluga approaches, but the tag doesn’t stick to its back. Three times a charm? Yes! This time, we manage to tag AlbioriX, who is probably twenty-something at the time. For twelve hours, he keeps us in suspense! Once the suction cups lose their grip, we hustle to recover this precious tool. Thanks to AlbioriX, we understand the diving patterns of belugas a little better.