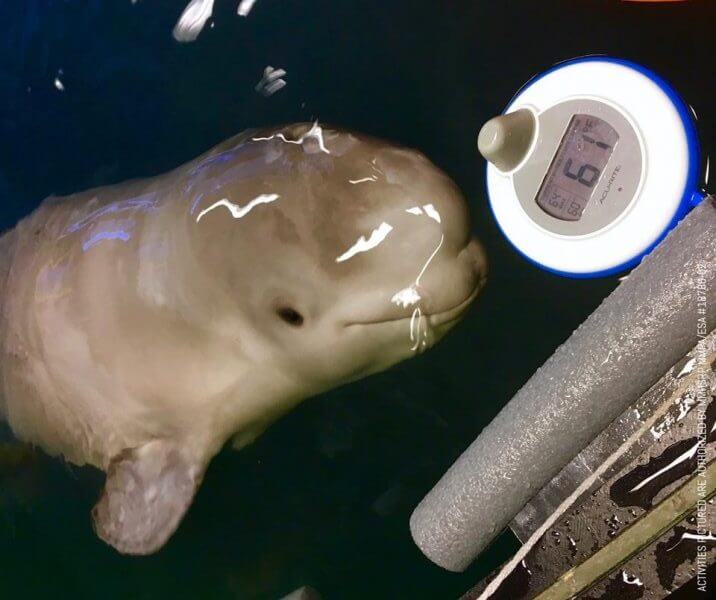 Since being found stranded alive on September 30, the newborn beluga of the Cook Inlet population is still in intensive care at the Alaska SeaLife Center. Its condition continues to be monitored by the team composed of experts from the Vancouver Aquarium, Georgia Aquarium, Shedd Aquarium, Mystic Aquarium and Sea World.  “This guy is seeming bright and responding to therapy,” explains Dr. Kathy Woodie in a video posted by the Alaska SeaLife Center. On October 27, nearly a month after its arrival, the beluga was named Tyonek, which could be translated as “Little Chief” and which is also the name of the nearest village to the site of its stranding. This village is part of the indigenous Dena’ina community.

The young beluga is now successfully feeding from a bottle on its own, but still needs to be tube fed calorific supplements to survive. When it arrived on September 30, the beluga was unable to maintain its body temperature and the water in the pool was warmer (21°C) than its natural environment (7°C). The team gradually lowers the temperature and yesterday, it tolerated a temperature of 16.1°C.

The beluga is not visible to Alaska SeaLife Center visitors. For the time being, the National Oceanic and Atmospheric Administration, the department that regulates activities involving marine mammals, did not specify whether the animal would be returned to its natural habitat or remain in captivity.