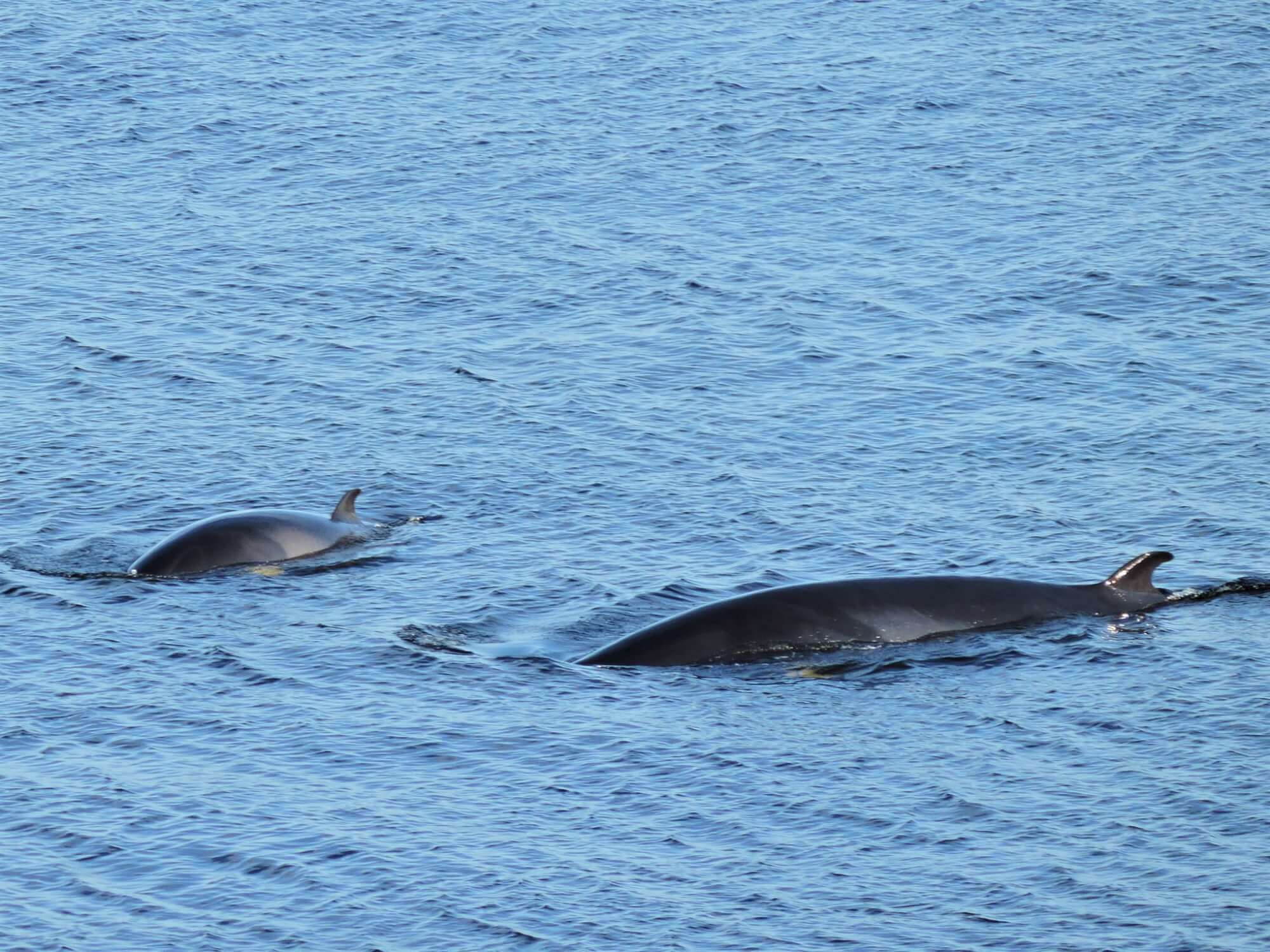 This minke whale calf is accompanied by its presumed mother. © Julie Savard

Side by side, two minke whales swim off Pointe Noire near the town of Baie-Sainte-Catherine. One of them is clearly smaller than the other. A mother and her calf? Could be! According to researcher, minke whale specialist and Mériscope director Dany Zbinden, “In the past four years we have seen a significant number of juvenile minke whales in the Estuary.” This is quite surprising, as it had previously been thought that female minke whales accompanied and nursed their calves for a brief four months or so before dissociating themselves from their offspring once the latter were fully weaned. Since calving takes place between November and March, separation often occurs even before the animals arrive in their summer feeding grounds. Is it a change in minke whale culture that is causing young animals to stick around longer? A simple bias in the way we observed this species in the past? Isolated cases rather than a real trend? Monitoring the minke whales that visit the Estuary will certainly tell us more about this species, which is very present but also very mysterious.

Minke whales in the Estuary are photo-identified. Markings on the dorsal fin and chevron help researchers distinguish one individual from another. Thus, the minke whale photographed by Renaud Pintiaux on April 28 off Cap de Bon-Désir in Les Bergeronnes is identified by Dany Zbinden as Ba256, a minke whale also observed in September 2019 in the same sector. On May 3, Renaud spots this individual with such distinctive marks.

Little by little, minke whale reports are increasing, from Cap-des-Rosiers in the Gaspé region to Longue-Pointe-de-Mingan in the Bay of Sept-Îles, not to mention Pointe-des-Monts off Anticosti Island. Also on the upswing are reports of one of belugas’ favourite prey: capelin. 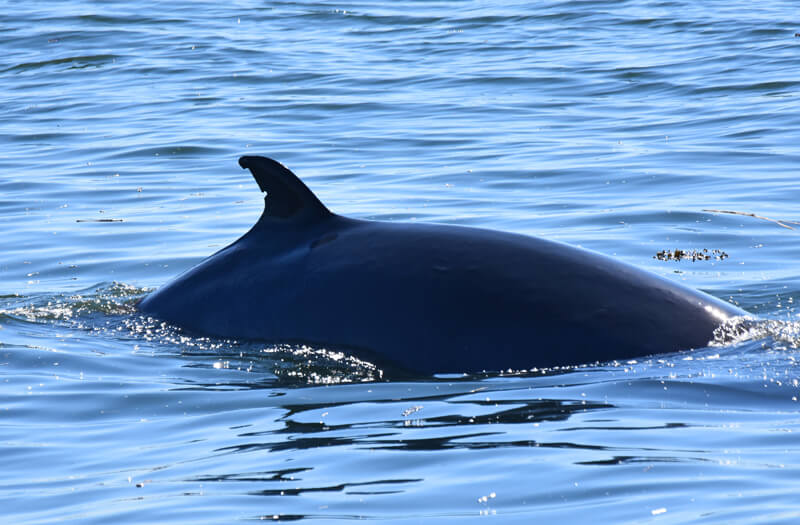 Ba256 has visible notches in the dorsal fin, which helps distinguish it from other minke whales. © Renaud Pintiaux

In a number of places along the coast, capelin have begun to “roll”. When this little fish comes to lay its eggs on the beach, it seems to roll across the sand. Males reach shore first, where they wait for their female counterparts to begin breeding. They squeeze the sides of the females to extract her eggs. With vigorous flaps of the tail, the fish deposit their fertilized eggs in the sand or gravel. There they are protected from the tides and predation until they hatch, about two weeks later. It’s a striking spectacle to witness, both to observe the hordes of fish “rolling” in the waves and to see the people gathered to harvest them by the shovel- or bucket-full. Additionally, the public is invited to share their observations of this natural phenomenon with the Capelin Observers Network of the St. Lawrence Global Observatory in order to better monitor this species that is such a critical link in the food chain.

In the Estuary, well known belugas have once again been photographed by whale enthusiast Renaud Pintiaux. Yorkie was swimming near the ferry docks in Les Escoumins. Yorkie is believed to have been born before 1973, making him one of the oldest belugas we know. In fact, he bears the number DL0062, which means he is the 62nd individual to have made his entry into the photo-ID catalogue! That day, this male was swimming alone less than 100 metres from shore. A little farther out, three other belugas including Cumulus go about their business, and may have even been communicating with one another despite the distance separating them. Indeed, the sounds emitted by belugas can travel much farther than the human voice can.

In Saint-Irénée on April 29, a dozen or so belugas take advantage of the rising tide. For a good 40 minutes, an observer is able to enjoy their ballet.

Once again, right whales have been spotted during aerial surveys conducted by Fisheries and Oceans Canada. Migration is therefore still underway. The planes also observed fin whales in the Honguedo Strait, midway between Anticosti Island and the Gaspé Peninsula.