Exuberant, splashy, and ubiquitous, humpback whales sometimes tend to turn our attention away from other cetaceans. And not only when their name is Tic Tac Toe!

In spring in Blanc-Sablon, it is not uncommon to see icebergs floating across the water, or to spot humpback whales. A traveller passing through the region had the chance to witness both these spectacles at the same time and in the same place. Additionally, the whale was accompanied by its calf and performed a breach. This is what memories are made of.

Even when humpbacks are absent, observers are still delighted by the presence of other marine mammals in the St. Lawrence. Harp seals, grey seals and minke whales have been gathering near the Mingan Archipelago for the past two days, together with many species of seabirds. In Gallix, one whale enthusiast spotted three minke whales not far from shore.

On the road between Baie-Comeau and Franquelin, a motorist finds himself distracted by cetaceans: “I see minke whales while driving along the river and sometimes it’s hard to stay focused and keep my eyes on the road. Fortunately, he is sometimes able to pull over and enjoy the show. “There are also a lot of minke whales feeding just off of Franquelin. Harbour porpoises arrived this week, but I haven’t seen any large spouts yet.”  On the other side of the river, a resident posted in Cap-Chat spots about fifty belugas heading upstream.

Out in the Gaspé as well, the whales have arrived. Five minke whales are observed at Cap Gaspé, while a lone humpback whale is reported near Saint-Yvon. Even if it is a fish and not a marine mammal, an impressive basking shark was also seen in Saint-Yvon. Despite being the second largest fish in the world, this plankton-feeding species is completely harmless. In Pointe-au-Maquereauearlier this week, a resident saw a minke whale swimming in the river, followed by a harbour porpoise not far from there.

In the Saguenay-St. Lawrence Marine Park, several species of cetaceans have been present, including minke whales, fin whales, humpbacks, belugas and numerous porpoises. As for pinnipeds, several groups of harp seals numbering over 50 and sometimes even 80 individuals have been observed offshore. Grey seals and harbour seals round out the picture.

In the Saguenay Fjord, a kayaker notices a solitary beluga near L’Anse-de-Roche, while the season’s first groups of belugas were observed in Baie Sainte-Marguerite over the weekend. 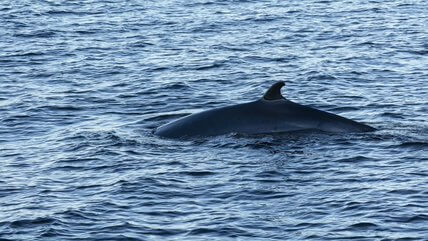 Minke whales have been present throughout the St. Lawrence this week. © Valérie Thériault-Deschênes

A whale enthusiast travelling across Quebec relates: “Yesterday, Thursday, June 2, I took the ferry between Rivière-du-Loup and Saint-Siméon. Just before rounding the southern tip of Île aux Lièvres, I was treated to a sighting of belugas.”

Farther upstream at Cap-à-l’Aigle, two harbour seals splash around near shore and sometimes even near Port de Refuge. Despite the variety of sightings, it is once again a humpback that steals the show in Tadoussac. But not just any humpback!

On June 2, a CIMM naturalist spontaneously decides to go out to sea: “We finished work early, so I shifted into high gear to go see whales! I said to myself: it’s 3:30 and the cruise starts at 4, so I have time…” And her rushed departure was well worth it, as she became one of the first observers this season to spot one of the most famous humpbacks in the St. Lawrence Estuary: Tic Tac Toe. This pioneer has been visiting the waters of the Marine Park since 1999 and owes her name to the large “X” on the right lobe of her tail.

Not only is the matriarch back, but she was seen with another smaller individual. However, she already had a calf in 2020 and 2021, which is already a feat, since it means that she would have carried out gestation and nursing at the same time. Rumours are swirling. Could it be a new calf… the third one in three years? This is a rare phenomenon but not unheard of: a few cases of humpback whales having calves several years in a row have already been documented, notably Houdini and Big Mama on Canada’s west coast. Could she be taking care of another whale’s offspring? This has previously been observed in other species of marine mammals, but never in humpbacks. Could it be that last year’s calf is not yet fully weaned? Calves can sometimes follow their mother for two years.

To put an end to the debate, researchers will have to identify the calf at her side. If it is last year’s youngster, we might be able to recognize it. If this is a new calf, we will have to wait to observe it nursing or accumulate multiple observations of the female and the calf together to draw a conclusion. 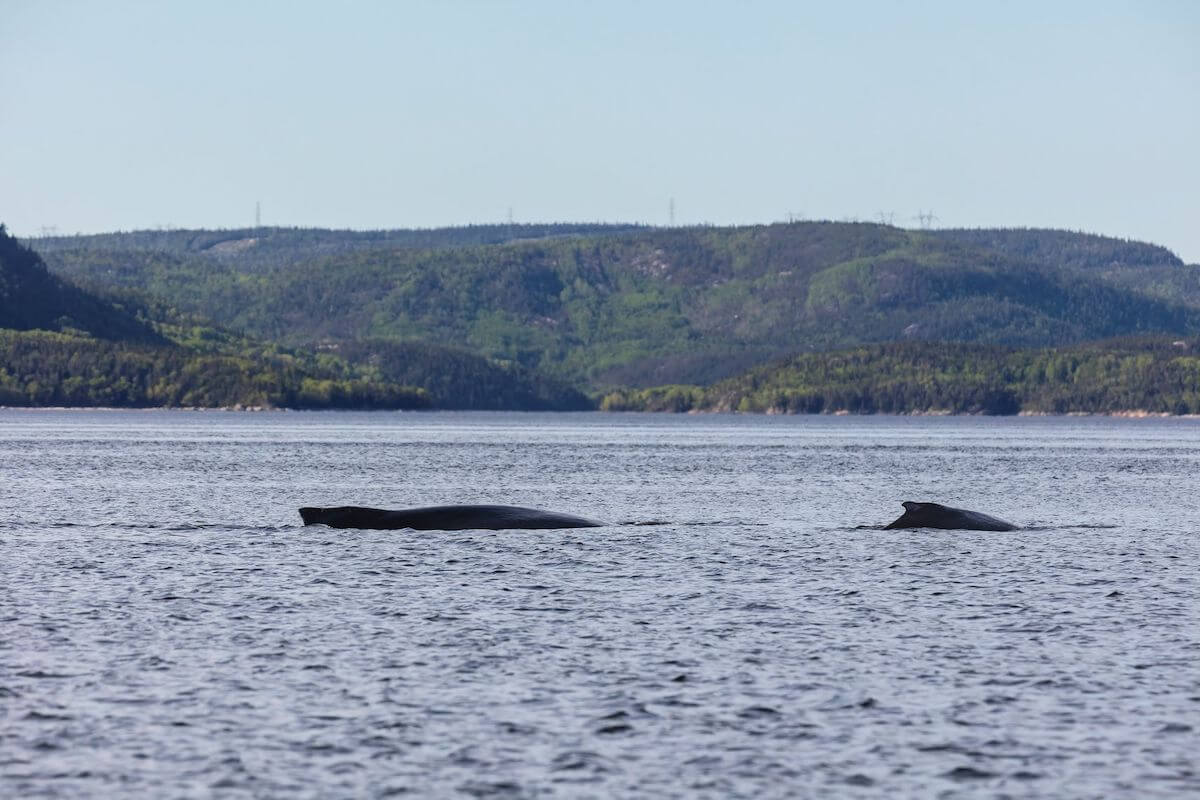 Tic Tac Toe together with a smaller individual. © Valérie Thériault-Deschênes 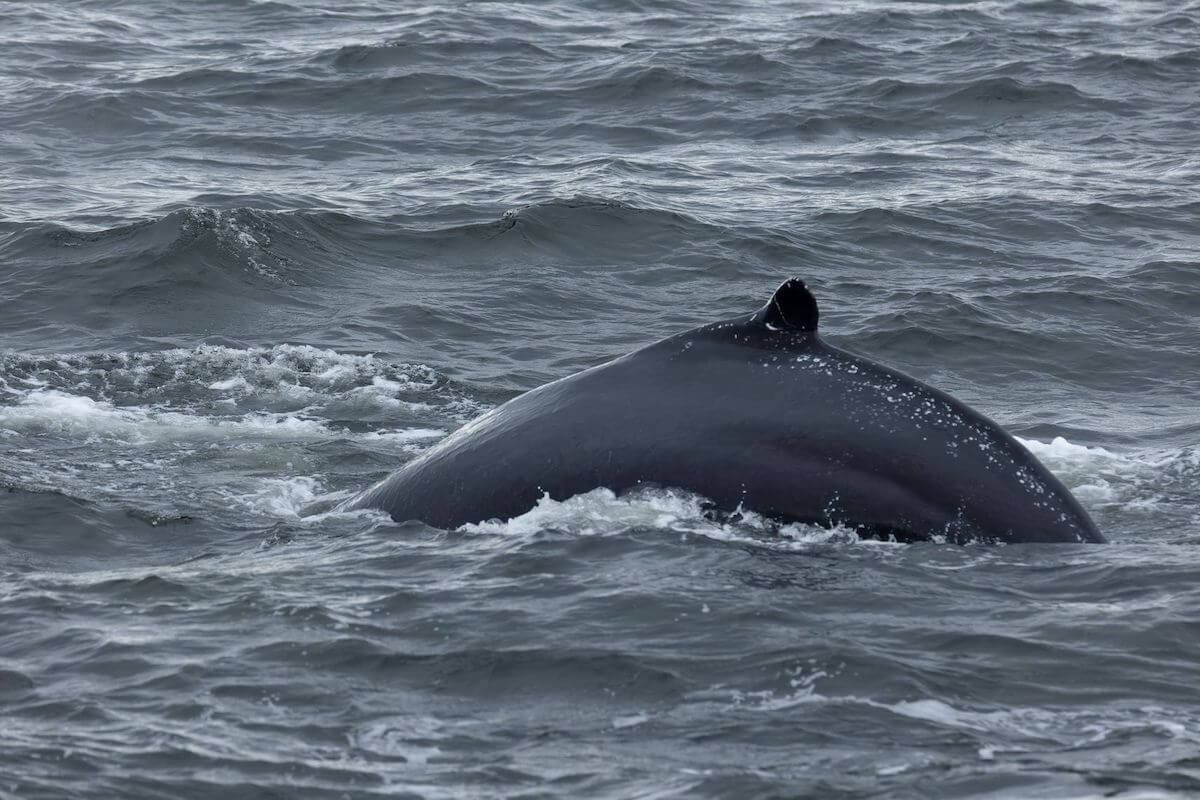 - A humpback whale not showing its caudal fin. © Valérie Thériault-Deschênes
Observation of the Week - 9/6/2022