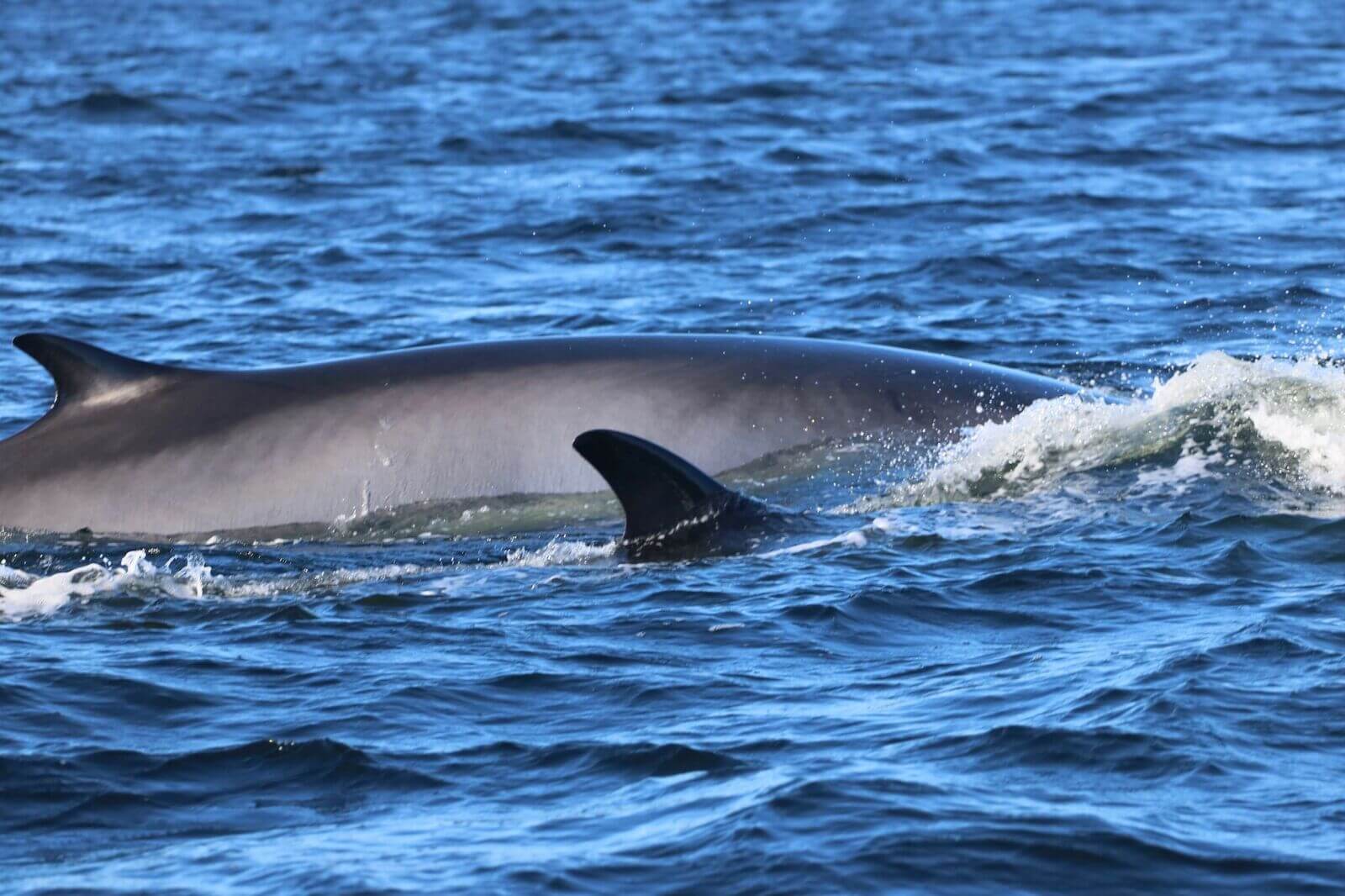 A fin whale calf and its mother © René Roy

After birth, a calf remains with its mother at a minimum for the duration of nursing, which varies from a few months to a few years, depending on the species. Since calves only drink breast milk early in their lives, following the rest of the group helps ensure their survival. Additionally, after a few months, several species undertake a migration. It is therefore essential for a calf to learn to swim and communicate with its mother.

The calf must be able to swim alongside its mother at the same speed as her. A whale accompanied by a youngster tends to decrease its cruising speed. Additionally, the calf uses the so-called “echelon” swimming technique, which increases its speed. To use this technique, it positions itself near the dorsal fin of the adult. It takes advantage of the water movement created by its mother, which facilitates swimming by reducing the water resistance to which it is exposed. This is the same principle used by geese that will fly in V-shaped flocks to reduce air resistance and save energy.

Swimming in echelon is practised until the young animal’s motor skills are sufficiently developed. After that, a different strategy will be used: swimming in the position of a newborn, which has been observed in delphinids. By positioning itself below its mother, a calf enjoys less improved hydrodynamics as compared to swimming in echelon, but is better protected from predators such as killer whales or sharks. Surprisingly, it is in the calf’s best interest to position itself to the right rather than to the left of its mother when swimming in order to increase its chances of survival!

During the first few months of its life, a calf learns how to communicate with its peers, which helps avoid getting separated from the rest of the group. Belugas and other toothed whales communicate mostly at high frequencies, but newborns produce only low-frequency sounds. They will have to develop their vocal repertoire by imitating adults. A newborn that drifts away from its mother may use a “contact call” to make its presence known. Composed of a series of sounds, this complex call is mastered by belugas in one to two years. In sperm whales, each mother/calf pair has its own specific call that allows them to identify each other. It is believed that beluga contact calls are also specific to a mother and her young. Means of communication are numerous and vary from one species to another, from one group to another and even from one individual to another, which does not make research on the subject any easier. The use of contact calls to accurately identify an individual could enrich our understanding of communication between a whale and its calf.