How did baleen appear? 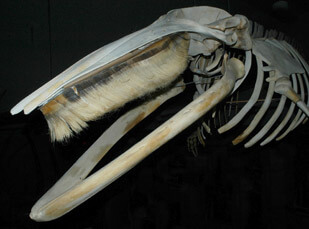 A recently discovered whale fossil has proven to be an important piece of the puzzle with regard to whale evolution. The ancestors of baleen whales, which initially had teeth, are believed to have developed a suction system in order to feed on tiny prey that were abundant in the oceans. This system would gradually evolve into a filtration system in which the baleen act as a filter.
Nicknamed Alfred, the fossil was discovered in 2014 in Washington State, USA. It is 25 million years old and belongs to a group of extinct whales known as aetiocetids. Alfred’s teeth show distinctive horizontal markings. Researchers believe that these scratches are attributable to the teeth grinding against the prey or sediment sucked into its mouth.

This animal therefore had teeth (Alfred showed no traces of baleen), but it had switched to an intermediate feeding method between biting and filtration: suction. It sucked in its prey by sticking out its tongue and then quickly retracting it to create a rapid current toward its oral cavity, just like belugas do. Used less and less, the teeth would eventually disappear, paving the way for the appearance of baleen stemming from the gum.

Various species of whales have evolved over millions of years by exploiting different resources to minimize competition and optimize their consumption. Today, baleen whales feed on small living animals that live in shoals such as fish, krill and copepods. They ingest huge quantities of these small prey in a single gulp mixed with sea water. Baleen filter this “soup”, keeping only the prey inside the whale’s mouth.

Additionally, thanks to 3D technology, scientists were able to determine based on its skull bones that Alfred was only 3 m long, far less impressive than the size of today’s baleen whales. The suggested hypothesis is that as baleen takes up significant space in the mouth, the evolution from suction to filtration might have required an increase in the size of these animals.