Every summer since 2003, the Parks Canada team has been scrutinizing the waters in and around Baie Sainte-Marguerite to tally belugas and understand their behaviour. This project aims to better understand beluga habitat and its particularities, detail the behaviour of these animals and watercraft users and understand their interactions with one another in order to assess whether current conservation measures are sufficient to adequately protect this species and its habitat. I have been involved in these research efforts since 2016.  Over the years, I have learned so much about these animals and the bay has undoubtedly become my favourite place within the Marine Park.

On September 2, I start my day by biking the three kilometres that separate the service centre from the beluga lookout in Fjord-du-Saguenay National Park. The trail is magical and I’ve come to know it like the back of my hand! Once I make it to the top of the last big incline, I wonder if the belugas are there.

I’m not alone: My colleague Nadia is with me to learn the protocol. We reach the belvedere just as the belugas begin to arrive and surprise… They’re sleeping! Believe it or not, cetaceans have the uncanny ability to sleep and move at the same time. The water in the fjord is calm and the animals are moving very slowly, almost effortlessly, as if they’re gliding across the water surface. We can hear them breathing. At nearly one hundred individuals, they are numerous but rather scattered. Seeing them in a state of sleep like this tells me that the animals were able to move through the fjord without being disturbed too much. Besides, the fjord seems quieter to me this year. Whatever the reason, belugas take advantage of the tranquility of the fjord, including the Baie Sainte-Marguerite sector, which has been designated off limits to watercraft in summer, making it the first such zone in all of Canada. 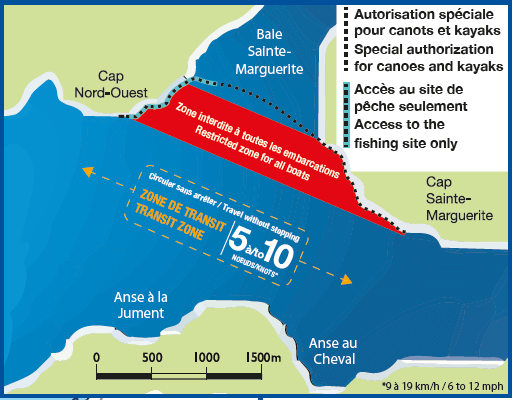 Restricted area: from June 21 to September 21, watercraft are forbidden from entering Baie Sainte-Marguerite in the Saguenay Fjord.

Visitors are present at the lookout and seem to be enjoying themselves. We take out our equipment, including a tripod, a pair of binoculars, a camera and a notebook. Data recorded include the number of individuals present, the sectors frequented, and herd composition (number of adults, juveniles and newborns). I also jot down what the animals are doing: lazing on the water surface, swimming quickly or slowly, etc. Every boat transiting this portion of the Saguenay Fjord is also tallied.

Today, belugas are not following the same pattern we usually observe. In general, after arriving in the bay, they enter the boating restriction area and gather in the middle of the sector. Groups that include newborns tend to concentrate in the middle of the bay while adult-only groups generally gravitate toward the periphery. Today, they continue to rest, scattered from one bank of the fjord to the other.

Then, about an hour later, the animals’ slumber comes to an end and they begin to socialize! They grow ever more active on the surface. Juveniles a few years old swim energetically on their sides, while other individuals are spitting out water. We witness moments of learning between mothers and offspring in which the mother pokes her head above the surface to take a glance around, after which her calf imitates her. 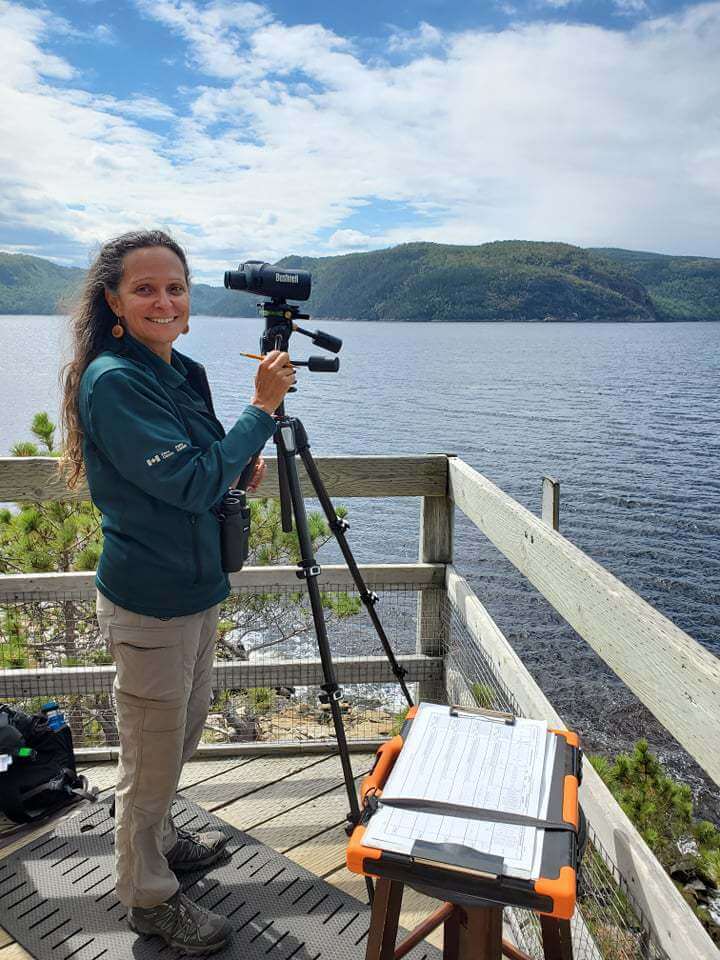 Many behaviours remain a mystery to us, but the research carried out in Baie Sainte-Marguerite makes it possible to better understand the beluga and its vital needs and to find solutions to support sustainable cohabitation with humans. Since the closure of Baie Sainte-Marguerite, the percentage of watercraft transiting these waters that actually enter the bay has fallen from 40% (before 2018) to 6% (2020).

Our land-based monitoring is possible thanks to the sharing of the platform between visitors, the Sépaq team and our scientific team.  At the same time, Sépaq naturalists Alexandra and Andrée-Laurence enhance the visit by explaining to the public what we do. Raising public awareness is essential to encourage their support for marine conservation. Recently, one visitor told me that what he most enjoyed about his time observing belugas: hearing them breathe in the otherwise peaceful surroundings. “You can feel their presence. I also heard their vocalizations, but hearing them breath is truly a unique experience.”  These brief exchanges always serve to remind us of the importance of our monitoring.

In closing, I invite you to come visit my “office,” the most beautiful one in the Marine Park! 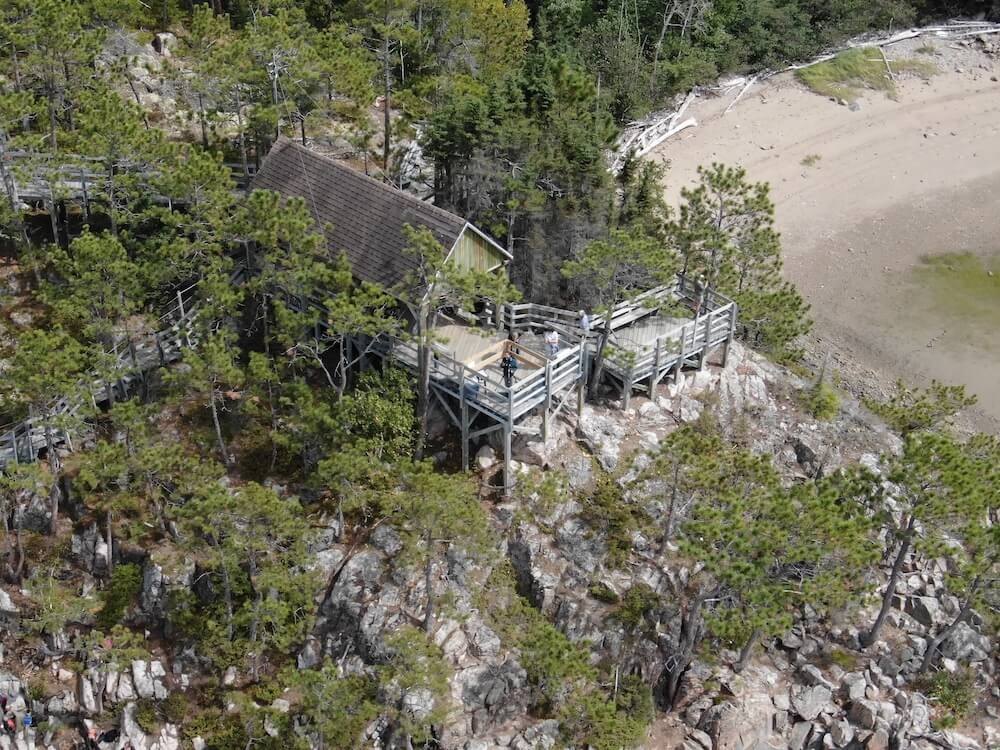 Cristiane C. de Albuquerque Martins fell in love with whales in the 1980s, when a humpback whale washed up alive on a beach in her native Brazil. Determined to help save the whales, she decided to study oceanography. In 2007, she went to Canada to complete a doctorate on maritime traffic and whale movements in the St. Lawrence. She settled in Tadoussac in 2012 and collaborated with GREMM, ROMM and Parks Canada before joining the Parks Canada team in 2017. 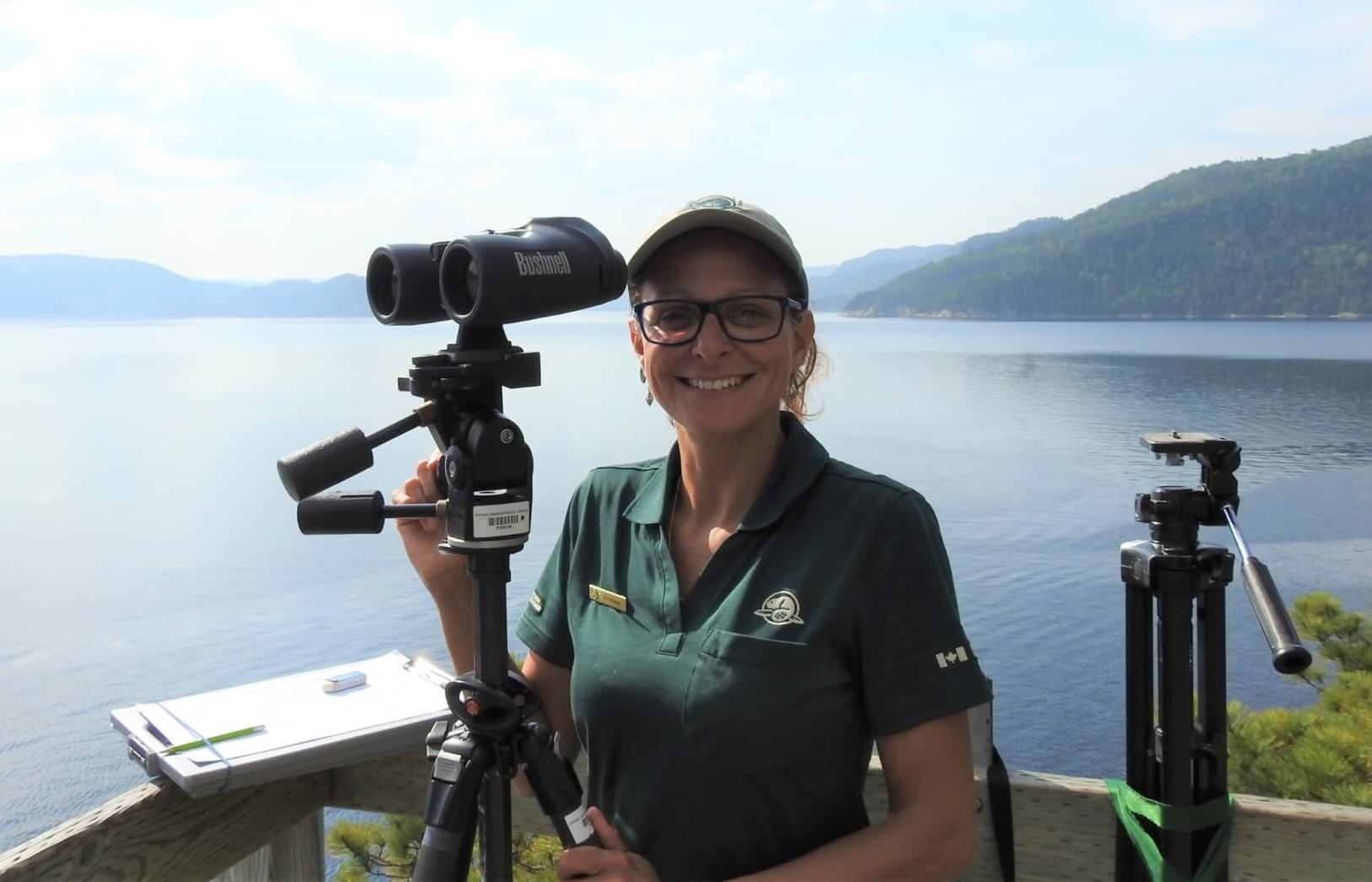