Do Planes and Helicopters Disturb Whales? 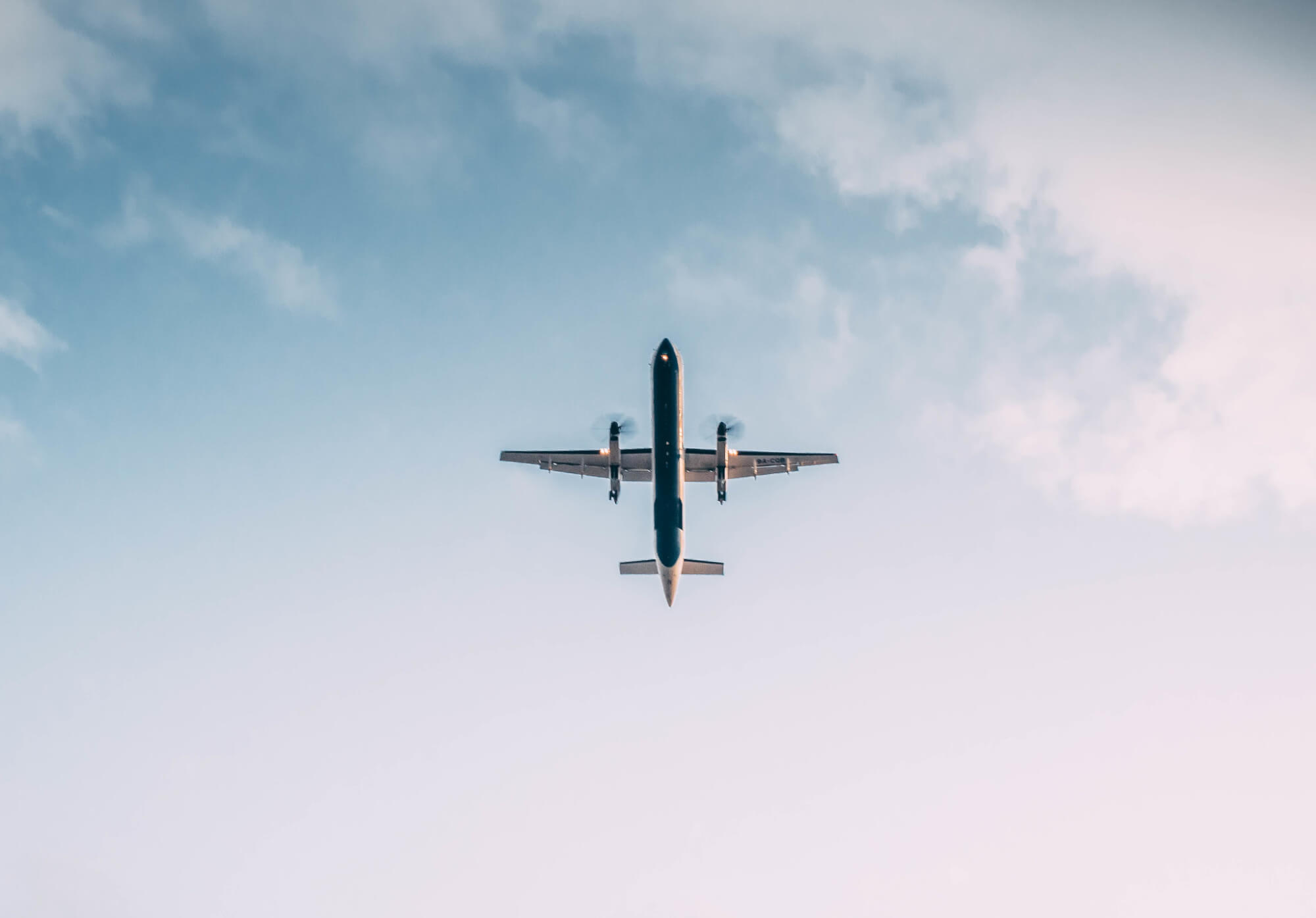 Whales are particularly sensitive to noise, whether human-made or natural. Noise can interfere with their communication and affect their behaviour. So, can planes and helicopters flying over their habitat disturb them?

The extent of the disturbance depends on many factors, such as the sound’s intensity, frequency and duration; the distance from the noise source to the whale; the water’s depth; the whale’s species; and what the whale is doing at that time.

In the case of aircraft, several studies have shown that aircraft noise can disturb the whales, but not in the same way as ship noise. “Therefore when compared to each other, even if a jet engine or propeller plane engine generates noise of much higher amplitude than a boat engine, its acoustic footprint is almost insignificant, unless its occurrence is very recurrent, like near a runway in a busy airport,” explained Manolo Castellote, a researcher working on noise disturbance at the National Oceanic and Atmospheric Agency.

From Air to Water

When sound produced in the air is transmitted to water, a large amount of sound energy is reflected off the water. Only waves that strike the water at a near-vertical angle are actually transmitted into the aquatic environment. In water, sound waves travel four to five times faster than in air.

At high altitudes, sound intensity is already reduced before it reaches the water’s surface. At low altitudes, noise is louder, but it decreases rapidly as the aircraft or helicopter moves away and changes the angle, which hinders the sound’s transmission into the water. In addition, sounds produced in the air would spread over a greater distance in shallow waters.

Aircraft mainly produce low- and mid-frequency sounds. Hence, baleen whales are theoretically more likely to be disturbed, since they communicate at those frequencies and their auditory system is adapted to hearing them.

Toothed whales generally produce and hear higher frequency sounds. In fact, beluga whales may not even hear some of the sounds produced by planes and helicopters. Furthermore, at frequencies below 1 kHz, sounds must be loud enough to be audible to belugas and must therefore come from aircraft at very low altitudes. At frequencies above 1 kHz (mid-frequency), sounds could easily be perceived by belugas at an altitude of 150 metres, but not at 300 metres.

The capacity of a beluga to hear a sound depends on its frequency and intensity.

A study conducted in the Beaufort Sea in northern Alaska compared the reactions of belugas and bowhead whales to aircraft and helicopter noise during spring migration to the feeding ground. In both species, the types of reactions, when present, were similar: reduced surface time, precipitous dives, sudden changes in direction or movement away from the noise source.

Researchers observed reactions in bowhead whales to only 15% of helicopter flights at altitudes below 150 metres. The available data does not indicate whether bowhead whales reacted less when the altitude was higher.

Most belugas did not demonstrate any visible reaction when helicopters flew above 150 metres. However, when the altitude was below 150 metres, beluga whales reacted more frequently than bowhead whales. In some cases, belugas appeared to lift their head out of the water to look at the plane or helicopter flying over them. They may therefore be sensitive to visual signals even when they don’t really hear the sounds of airplanes and helicopters. Further, researchers believe that when beluga whales’ ears are out of the water, they could hear both planes and helicopters at altitudes of up to 300 metres; this belief is based on studies conducted in harbour porpoises. 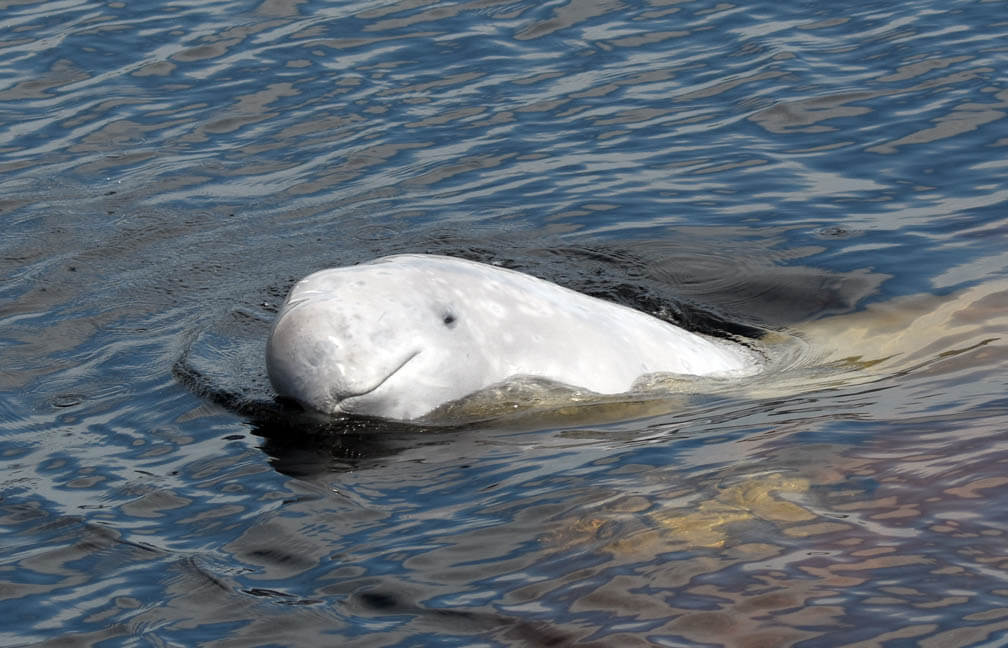 In the air, the ear of the beluga could hear planes and helicopters at greater altitude than in the water. © GREMM

In both species, other studies have shown that behavioural changes were more common in resting whales than in whales that were actively feeding or breeding.

Distress in a Group of Sperm Whales

In a similar study, a group of sperm whales behaved unusually after an aircraft circled above them for several minutes: the 11 sperm whales gathered in a semicircle facing outwards. The largest male in the group positioned himself towards one end, while the only calf of the group stayed in the centre of the curve. This type of formation is sometimes observed during real threats, such as killer whales, sharks and whalers.

Most of the whales’ reactions to airborne noise seem short-lived. But the long-term effects of these disturbances are particularly difficult to assess. In most studies, whales’ behaviour in response to aircraft noise is recorded from the aircraft itself, which greatly limits the time of observation following the disturbance. Moreover, a lack of a change in behaviour does not necessarily mean that the sound had no physiological effect on the whale.

Is Plane and Helicopter Noise Similar to Boat Noise?

The sounds produced by planes and helicopters are generally louder than those produced by boats. Ship engines emit sound directly into the water, thus limiting the loss of sound energy. These sounds also go in all directions, so tend to propagate over long distances. In addition, since boats travel more slowly than aircraft, the noise disturbance lasts longer. Indeed, the noise produced by boats can sometimes be heard for hours, while that of planes and helicopters is only heard for a few dozen seconds.

Further studies are needed to answer these questions. A better understanding of the effects of planes and helicopters would also reduce bias in whale research, which sometimes involves aerial surveys.

For now, it is prohibited to fly over the Saguenay–St. Lawrence Marine Park at less than 609.6 metres (2000 feet), to limit noise disturbance. According to the studies consulted, this distance seems sufficient to greatly reduce the impact of noise on whales.