They stand out from other members of their species by their unusual whiteness. They are known as albinos. Like land animals, whales can also exhibit this characteristic. But is this phenomenon frequent? How does this condition develop in an animal? And what about all-white belugas… Are they albinos? The Whales Online team invites you to discover the answers to these questions.

In so-called “true” albinism, a genetic mutation affects the gene that produces an important enzyme, tyrosinase. Without it, the body will not be able to produce melanin, a biological pigment responsible for colour. The skin, hair or even feathers of an animal therefore end up being white. As for their eyes, they sometimes appear red or pink, the absence of coloration in the iris leaving visible the blood vessels circulating in the eye.

In marine mammals, cases of albinism have been reported in 7 species of pinnipeds and 21 species of cetaceans, including pilot whales, Pacific white-sided dolphins and humpback whales. The most famous albino whale is Migaloo, a male humpback whale commonly seen off the coast of Australia.

Sightings of albino whales are generally infrequent, especially in large migratory species. There are probably a number of possible explanations for the rareness of this phenomenon. First, the alleles that cause albinism are recessive, meaning that this characteristic can only be expressed if the individual is homozygous. In other words, if an individual has only one copy of the gene for albinism, they will not be albino since the other copy of the gene, which will be “normal,” will allow for the production of melanin. The proportion of individuals having the two necessary mutated copies is low, which makes them rare. Whales may therefore carry the gene for albinism without ever actually developing this trait. 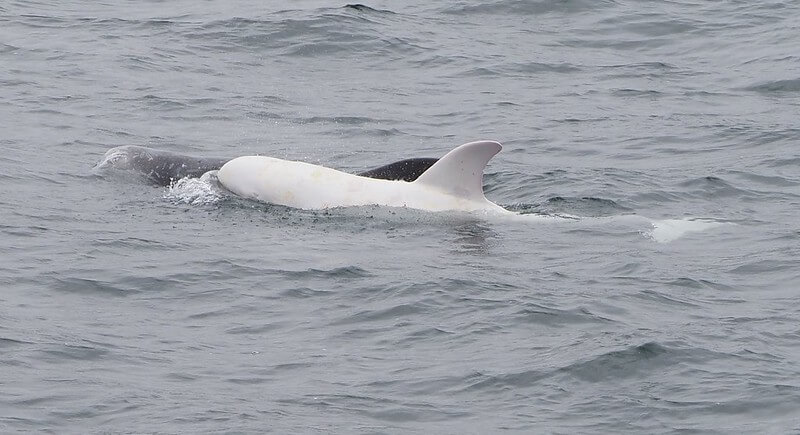 Additionally, melanin provides protection against the sun’s UV rays. Individuals with albinism are therefore very sensitive to sunlight since they have little or no melanin, which negatively affects their ability to survive. The paleness of albinos also makes them more vulnerable to predators and represents a disadvantage for hunting, as they are highly visible. Natural selection will therefore act against them.

Another condition known as Chédiak-Higashi syndrome can also lead to white skin. It is a lethal disease that interferes with the transport of melanin, amongst other things. As a result, individuals that have this rare condition exhibit the same discolouration that is typically associated with albinism. A killer whale suffering from Chédiak-Higashi syndrome was discovered off the coast of British Columbia in 2019.

There is also leucism and piebaldism, which can cause a discolouring of the skin, hair or feathers. In cetaceans, only the skin is affected by this type of disease. Unlike piebaldism, leucism can be uniform throughout the body. Both conditions are caused by the breakdown of melanocyte cells, which are responsible for producing melanin. Cases of leucism have been recorded in a few species of whales, including fin whales, grey whales and humpback whales. Piebaldism, which is quite rare in marine mammals, is known to affect dolphin and pinniped species such as the Atlantic spotted dolphin and the Antarctic fur seal.

Was Moby Dick an albino?

The famous whale from Herman Melville’s novel is described by the author as a giant white sperm whale. Moby Dick is a fictional animal that never really existed, but its character is based on real observations and events. To create the character of his infamous monster, Melville likely drew inspiration from the 1820 sinking of the whaling ship Essex after the latter was struck by a sperm whale. Moby Dick’s appearance and name are believed to come from the 1839 capture of an actual white sperm whale off the coast of Chile. This whale was killed near the Chilean island of Mocha, which gave rise to the name Mocha Dick. Thus, albino or at the very least leucistic sperm whales have existed in the past and probably still exist today. 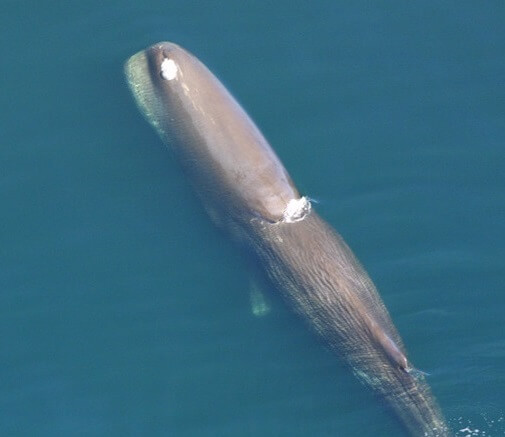 Finding a white sperm whale some day is not entirely impossible. © NOAA

Belugas are not albinos

When belugas are born, their skin is the colour of café au lait, which fades after a few years. The white colour of adults probably arose as a result of a genetic mutation and is believed to have spread throughout the species through natural selection. Like polar bears or arctic foxes, belugas live in an environment dominated by snow and pack ice. Animals that live in this type of habitat benefit from having white skin or fur. In such an environment, this trait not only offers valuable camouflage against predators, it also allows animals to remain undetected by their prey. White colouring has therefore become the norm in a number of species in the Arctic. 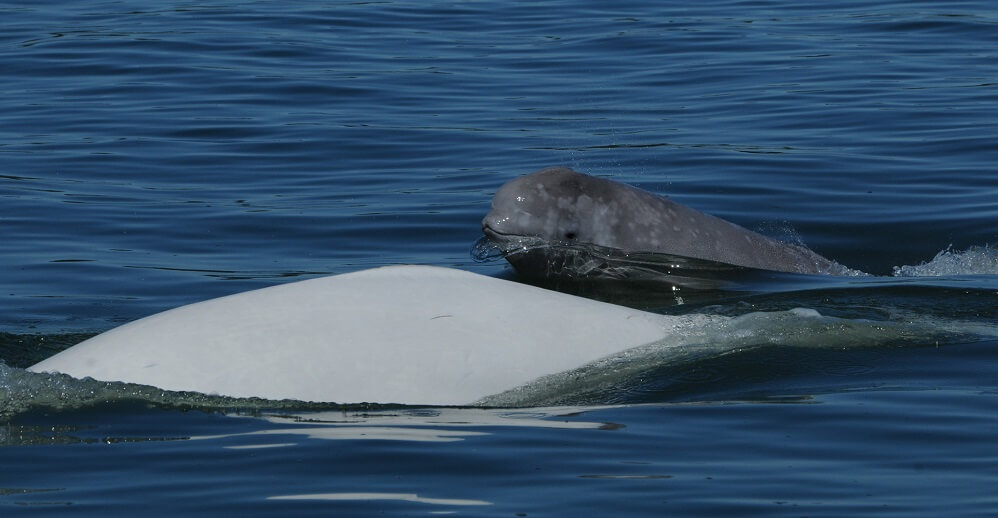 Although they are white, belugas are not albinos. © GREMM