Cultural transmission is a widely-accepted hypothesis within the scientific community to explain the movement and transformation of humpback whale songs through space and time. According to this theory, songs are passed on during contact between populations, meaning that whales learn songs from their neighbours. For the majority of researchers, cultural transmission in humpbacks is so obvious that it is inconceivable for them that these animals might learn and modify their songs by any other means, argues Eduardo Mercado III. This researcher from the State University of New York at Buffalo and cognitive science expert believes that the songs do not change with the arrival of serenaders from distant waters, but are rather in constant evolution.

Mercado, who’s main area of study is memory and auditory learning, initially became interested in humpback whales because they are the only mammals other than humans to learn and produce new sounds as adults. It was by analyzing existing data that he realized that the theory of cultural transmission of songs was flawed and was based on subjective analysis methods that did not always properly translate the properties of whale vocalizations.

To carry out his research, Mercado used pre-existing song recordings from three distinct humpback whale populations that, based on current knowledge, have no acoustic, visual or physical contact with one another. If we accept the theory of cultural transmission whereby humpbacks improve their songs through creative innovations and reproduce those of the “best” individuals, the songs of distinct populations that never come into contact with one another would be expected to evolve in their own unique ways based on the population’s own creativity and habits.

However, in the course of his analyses, Mercado discovered that a song produced by whales near Puerto Rico in 1970 was practically identical as one sung by whales off Maui in 2012, and that the majority of the themes identified by researchers in 1970 were also found in the songs of a humpback whale population in Colombia between 2013 and 2019! Since it is highly unlikely that culturally transmitted songs would evolve identically in populations isolated both geographically and by more than forty years, Mercado was forced to consider other avenues to explain the modification of whale songs over time. 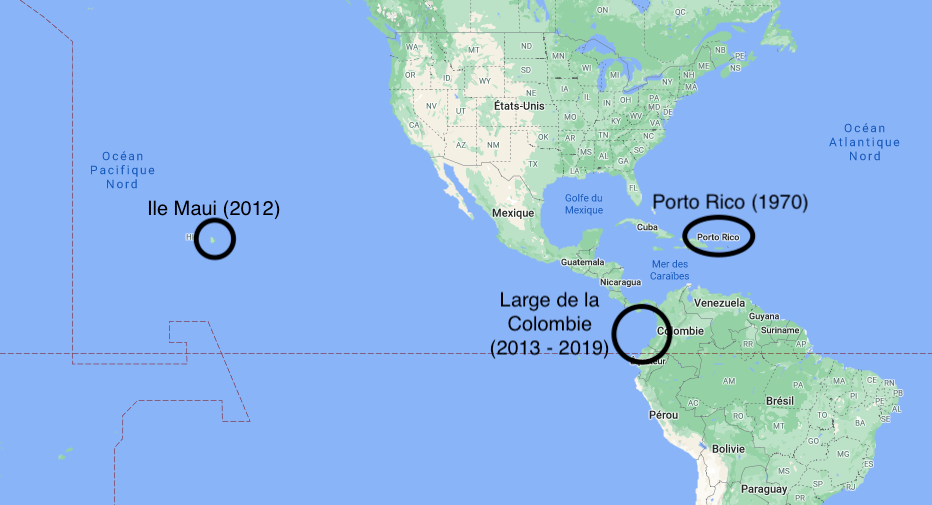 According to the researcher, the cultural transmission hypothesis has never been questioned because the method used to arrive at this hypothesis is subjective and analyzes data from a very “human” perspective, as a result of which cultural transmission appears to be the most obvious conclusion. This method consists of a symbolization process. “Basically, we replace a sound or a group of sounds with a label,” explains Mercado. “For example, while listening to a song, we would name a sound ‘bird call’ because we felt that it sounded like a bird. People have always analyzed songs this way.” Scientists translate what they hear by using words, letters, coulours (article in French) or symbols.

However, Josephine Schulze, a master’s student at the University of St Andrews, points out that the method has become more complex over time, especially thanks to the work of researcher Ellen Garland. Today’s researchers ensure the validity of acoustic similarities they have observed by using automated software programs that attempt to group together the most similar themes. This allows researchers to compare the results obtained by human analysis with those obtained by objective analysis and adjust them accordingly.

Only male humpbacks produce and transform songs, and only during the breeding season. © GREMM

To date, researchers using the symbolization method have established that whale songs occur in cycles of variable duration and are divided into themes, which are divided into phrases, which are in turn divided into sound units. The majority of themes are believed be static, while certain themes appear to be “transition themes”, where most of the transformations take place. Thus, the songs would be organized a bit like a Beethoven sonata in which we find a Theme A, a Theme B, and a modulating transition that links the two.

Measuring sounds in order to better understand them

According to Eduardo Mercado, this way of breaking down songs masks certain characteristics of the sounds that would help explain their transformation other than through cultural transmission. So he chose another method of analysis: instead of labelling a sound, he measures its acoustic properties, such as frequency, duration and pulse. “So when I analyze an entire song, I don’t break it down into small chunks, I just end up with a list of parameters,” he says. “These parameters are expressed in numbers, and I create images from these numbers so that people understand what I am talking about.” Josephine Schulze, on the other hand, points out that fully automated processes may not take into account some complex acoustic details.

Mercado’s new method allowed him to observe the evolution of songs from a new perspective: he was able to see the acoustic changes occurring one after the other as the animal was singing, and then noticed that the same sounds changed slightly with each repetition, possibly creating the impression of an entirely new sound (interpreted in the past as the start of a new theme, for example). According to his results, songs change on a continual basis as opposed to only during periods of transition. No sound unit is exactly identical to the previous one.

Humpback whales sing below the surface when they dive, carrying their secrets far away from the eyes and ears of researchers. © GREMM

Thus, according to Mercado, songs change gradually and continuously, both at the song level and over time. However, the way the songs evolve is not random; rather, they seem to take determined and predictable trajectories for those who know how to listen. But that’s for another article!