How does a whale carcass differ from an animal at rest? 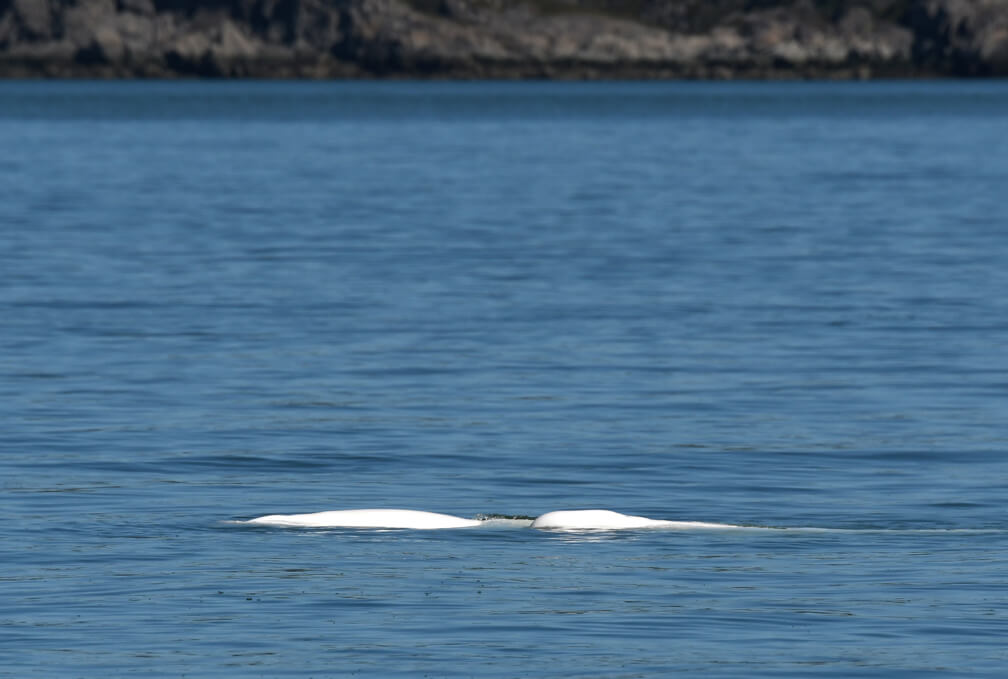 A passive beluga floating on the surface is probably just getting a little shut-eye. © GREMM

Upon seeing a whale floating oddly on the water surface, do you decide to immediately jump overboard and save it from imminent death, or do you let it sleep in peace? Whatever the circumstances, diving into the frigid waters of the St. Lawrence is strongly discouraged, and it is forbidden to approach a whale. On the other hand, it can be difficult to determine whether a whale is really in a bad way or if it is simply exhibiting normal resting behaviour. Here are a few clues to help better interpret the state of health of these animals that delight thousands of observers every summer.

When a whale lingers near the surface for a relatively long period of time and seems fairly passive, it is probably simply resting.

Indeed, whales have very particular resting behaviours. First of all, in cetaceans, breathing is voluntary, which means that these marine mammals constantly have to think about returning to the surface to breathe. It’s not easy to sleep when you constantly have to wake up to take a deep breath! Whales have therefore developed various strategies to be able to doze off without drowning. For example, many species of toothed whales, including belugas and dolphins, close just one eye at a time and keep half of their brains active at all times so that they don’t forget to breathe. Another strategy, which has been documented in belugas, humpbacks and right whales, is to float on the surface. This behaviour is called “logging” due to the animals’ resemblance to floating logs. The fin whale, on the other hand, tends to swim slowly near the surface, regularly raising a small portion of its body above the water to breathe.

Sperm whales are the most bizarre: They sleep “standing up”! Positioned vertically below the surface, they periodically raise the tips of their heads for a refill of oxygen. “The first time I witnessed this, in the 90s, I was with Daniel Lefebvre, our chief naturalist at the time,” says GREMM’s scientific director, Robert Michaud. He was totally excited; he kept saying ‘This is going to make an awesome skeleton!’ We were convinced it was a carcass.” This goes to show that even experts can make mistakes when they see unfamiliar behaviours! When in doubt, the best way to make sure a whale is doing well is to wait. Inevitably, living individuals will eventually resume more active behaviour and produce spouts. 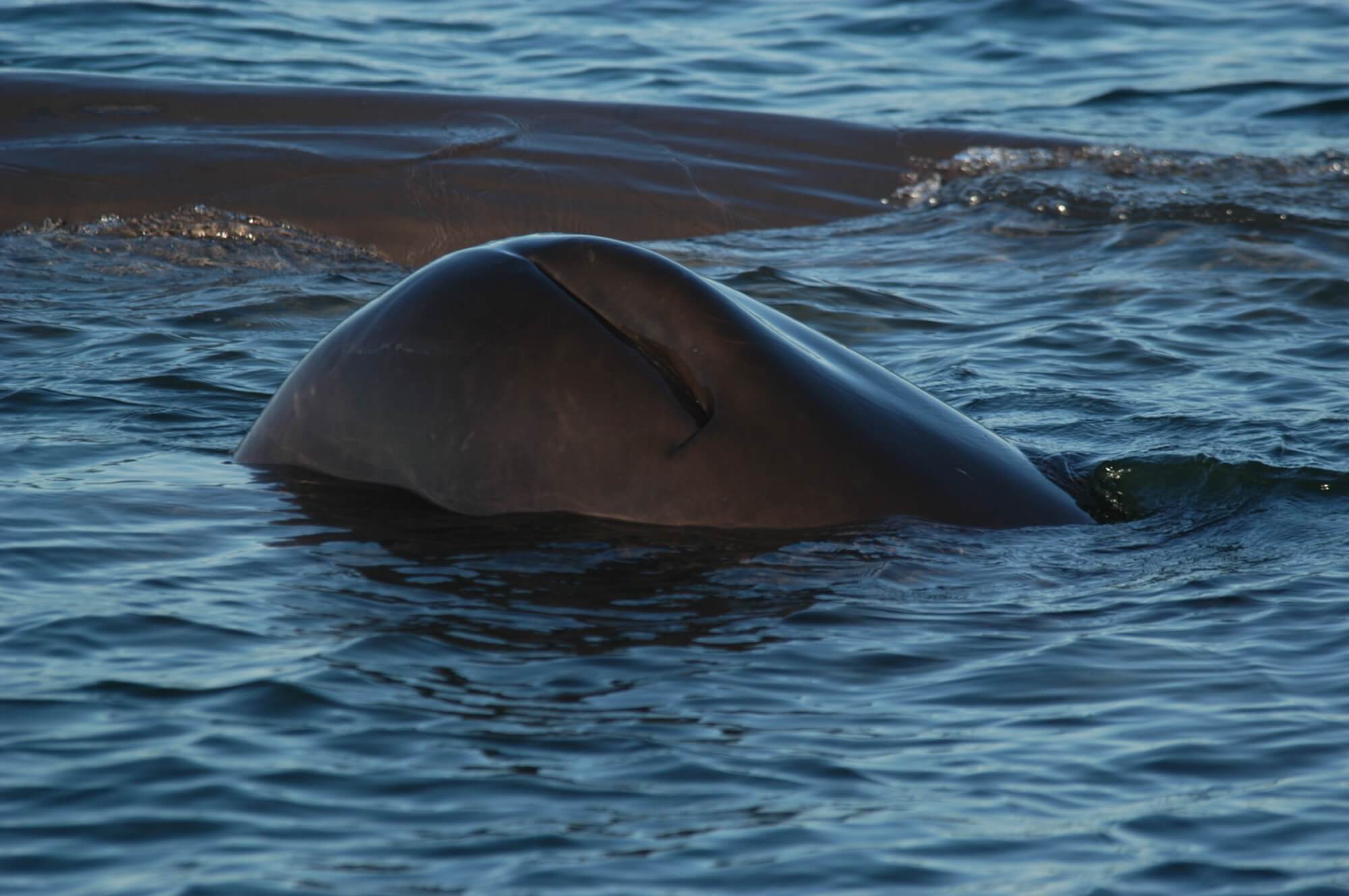 The sperm whale’s blowhole is located in the front of its head, which allows it to sleep upright without drowning. © GREMM

The smell of death

Signs of mortality rarely lie. If you discover a whale carcass, it is usually obvious that you are witnessing something unusual. Carcasses will lie perfectly motionless, never exhale and drift with the current. They give off a stench of decay and are often pecked at by seabirds. Their skin sometimes appears oddly discoloured or somewhat tattered. 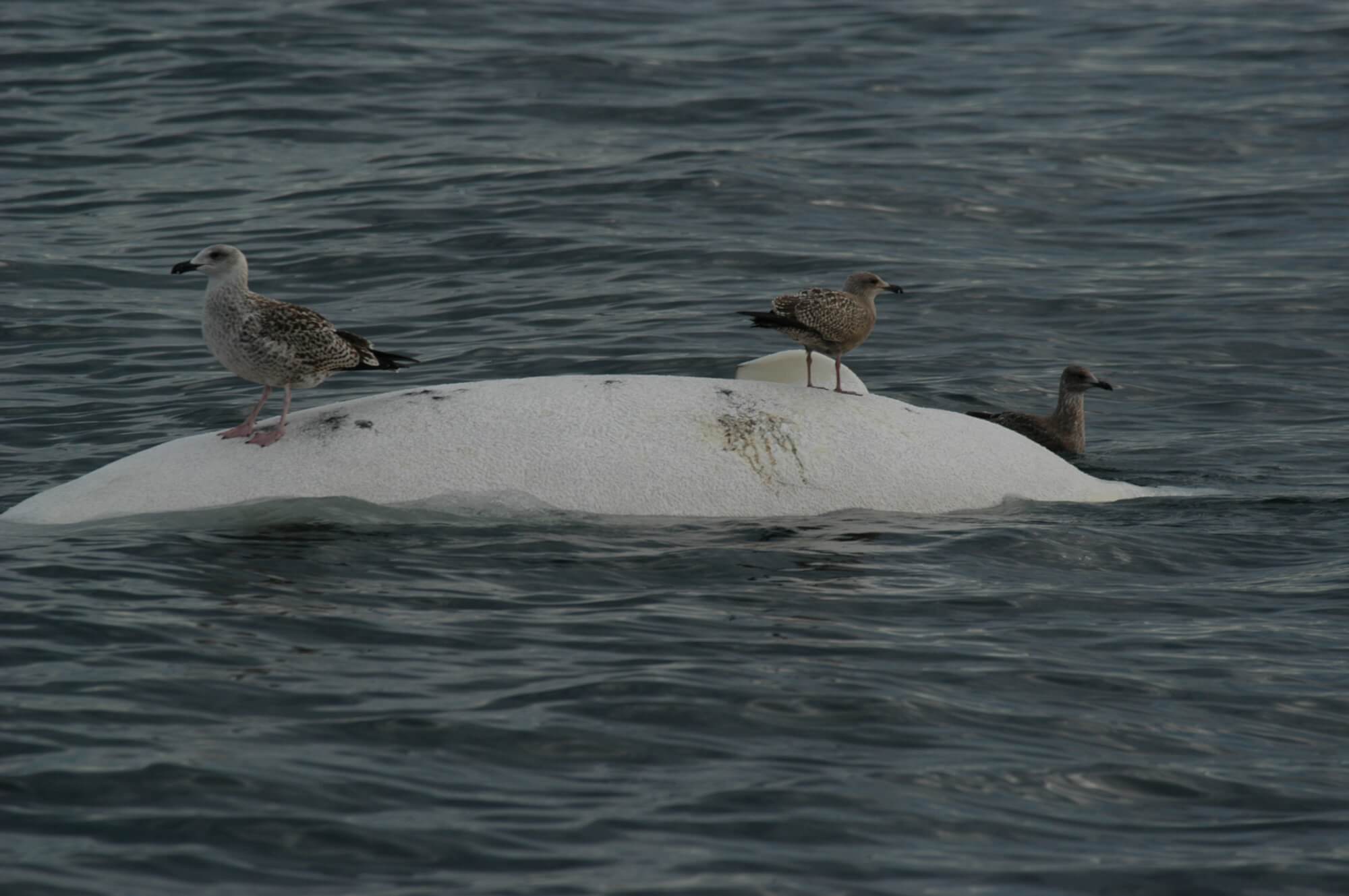 In belugas, deceased individuals often float on their side with one fin poking out of the water. They can also turn from white to yellowish due to their exposure to the sun. However, caution is warranted, as the skin of certain sick belugas can also turn yellow, since these weaker individuals spend more time at the surface than those that are perfectly healthy. The skin of other whale species also tends to change colour when decaying, but an odd colour is not necessarily synonymous with mortality, as some individuals might acquire unusual colouring even during the course of their lifetime. 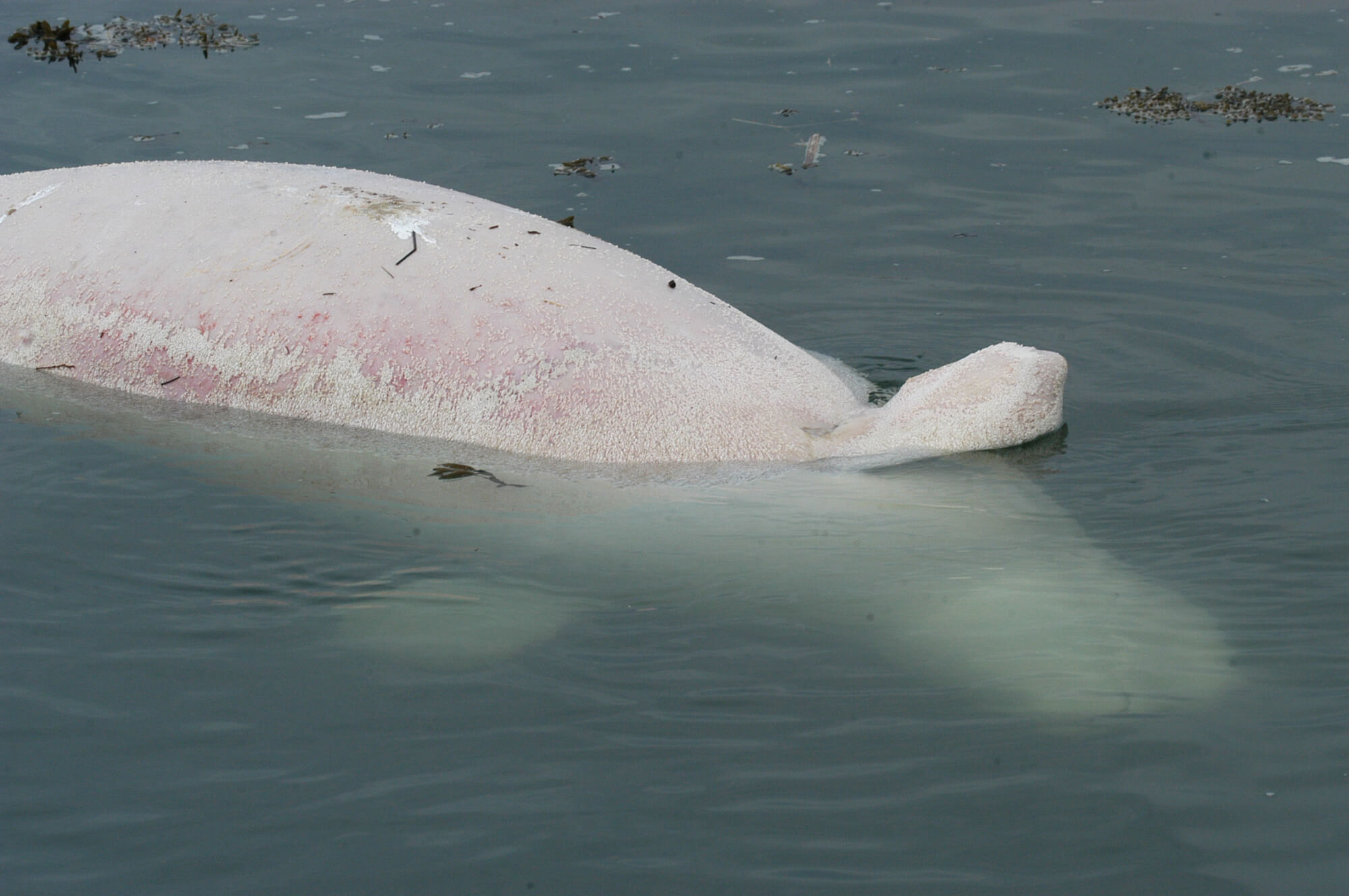 This beluga’s skin is beginning to flake. One of its fins is poking out of the water. © GREMM

In rorquals, after an animal dies, its ventral grooves bloat to the point that its belly resembles a hot air balloon. The tongue can also swell and look like a balloon. If you observe a whale that has one or more characteristics suggesting it is a carcass, dial 1-877 722-5346 to report your sighting to the Quebec Marine Mammal Emergency Response Network.

Warning: the following images may be difficult to view. 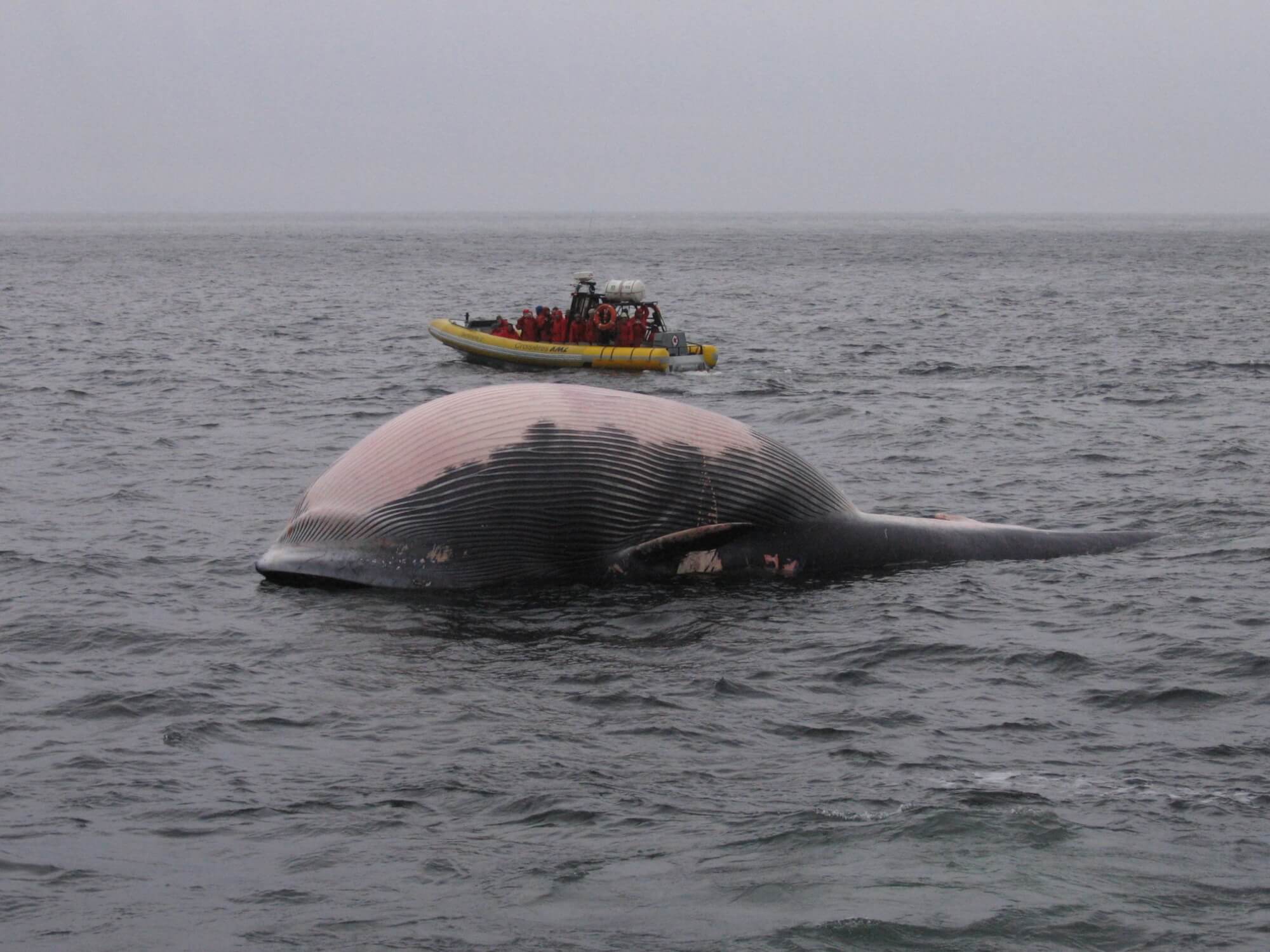 Decomposition gases inside this carcass caused it to bloat. © GREMM 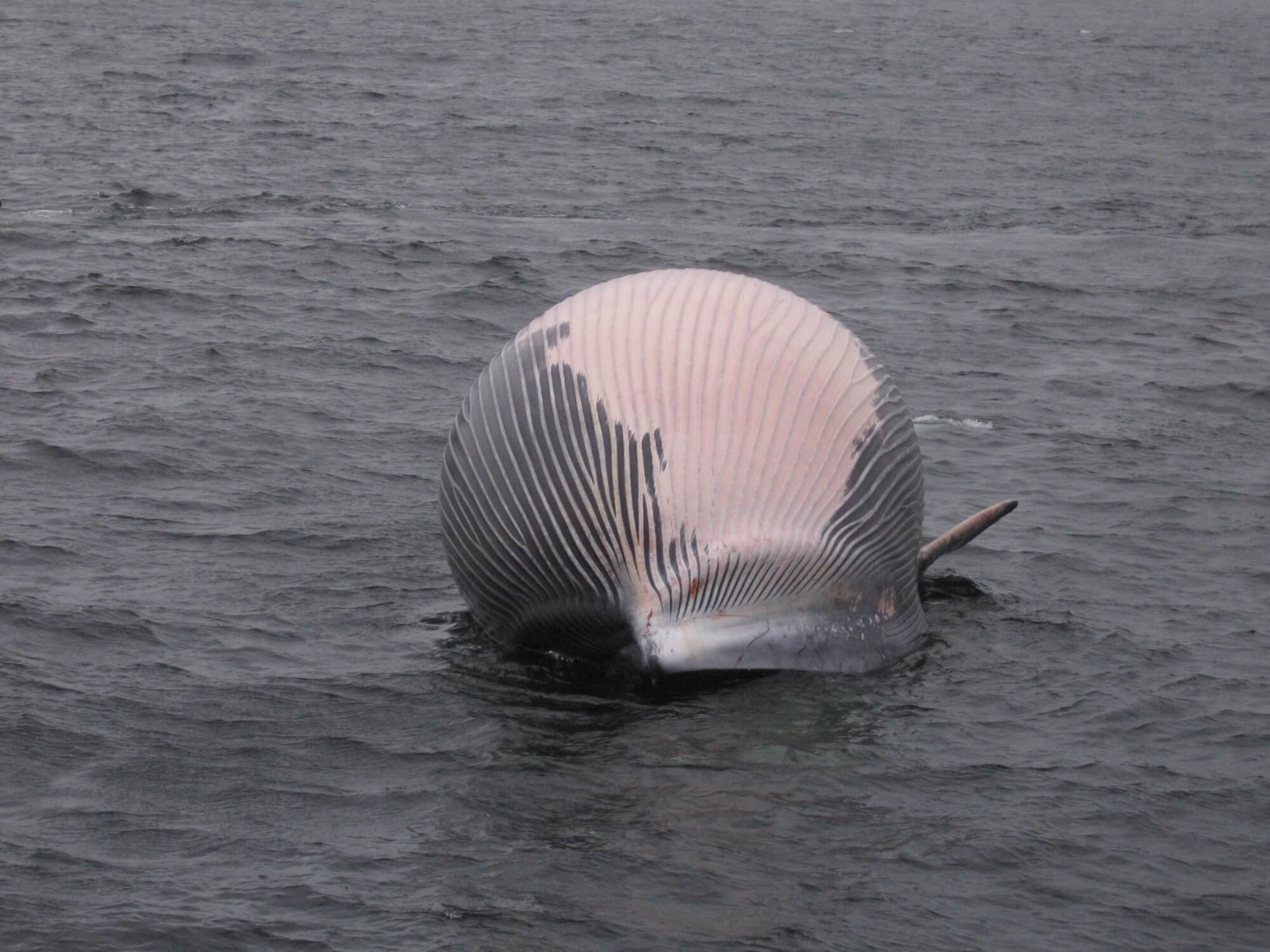 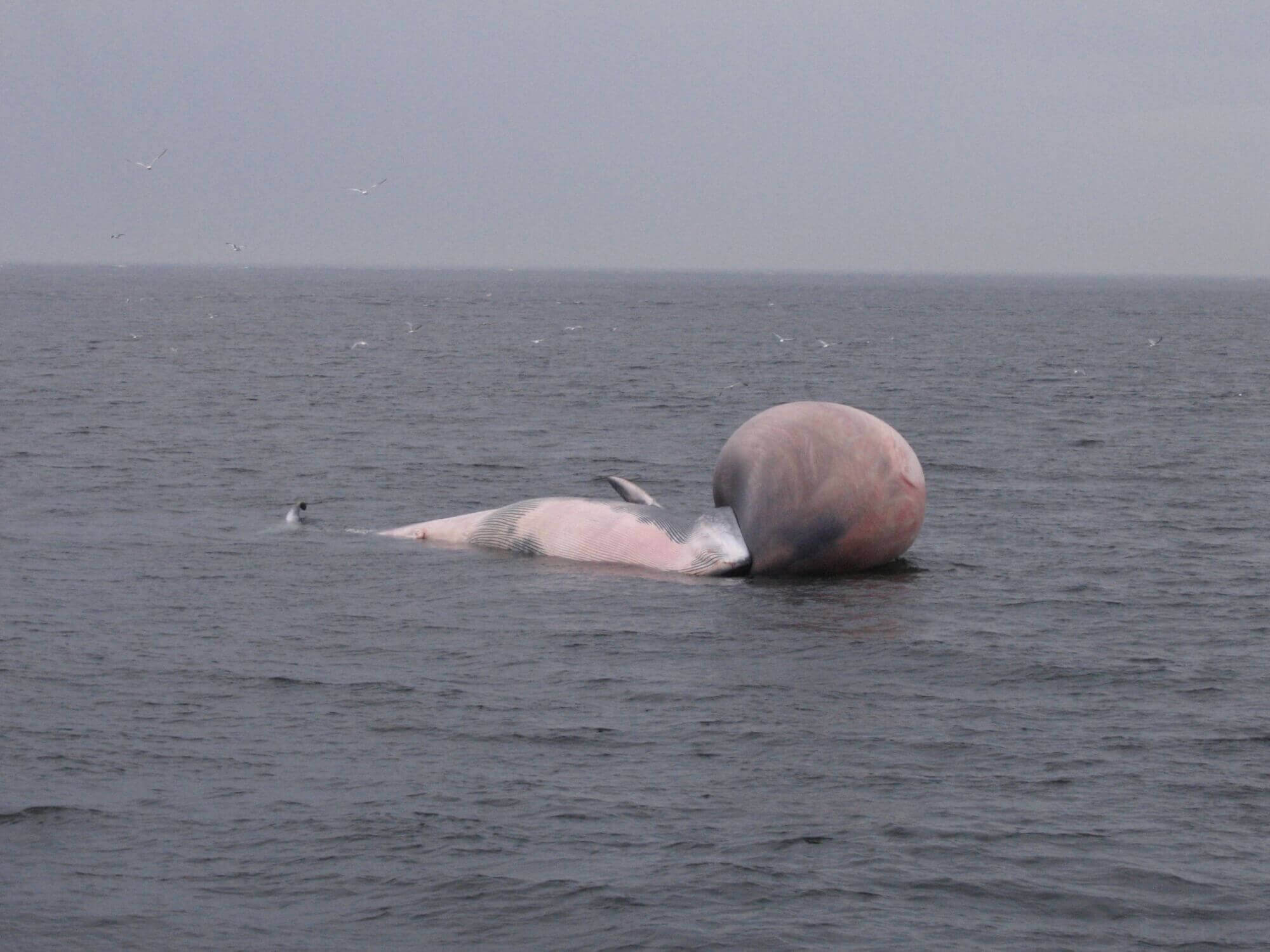 This giant “balloon” is actually a tongue! © GREMM 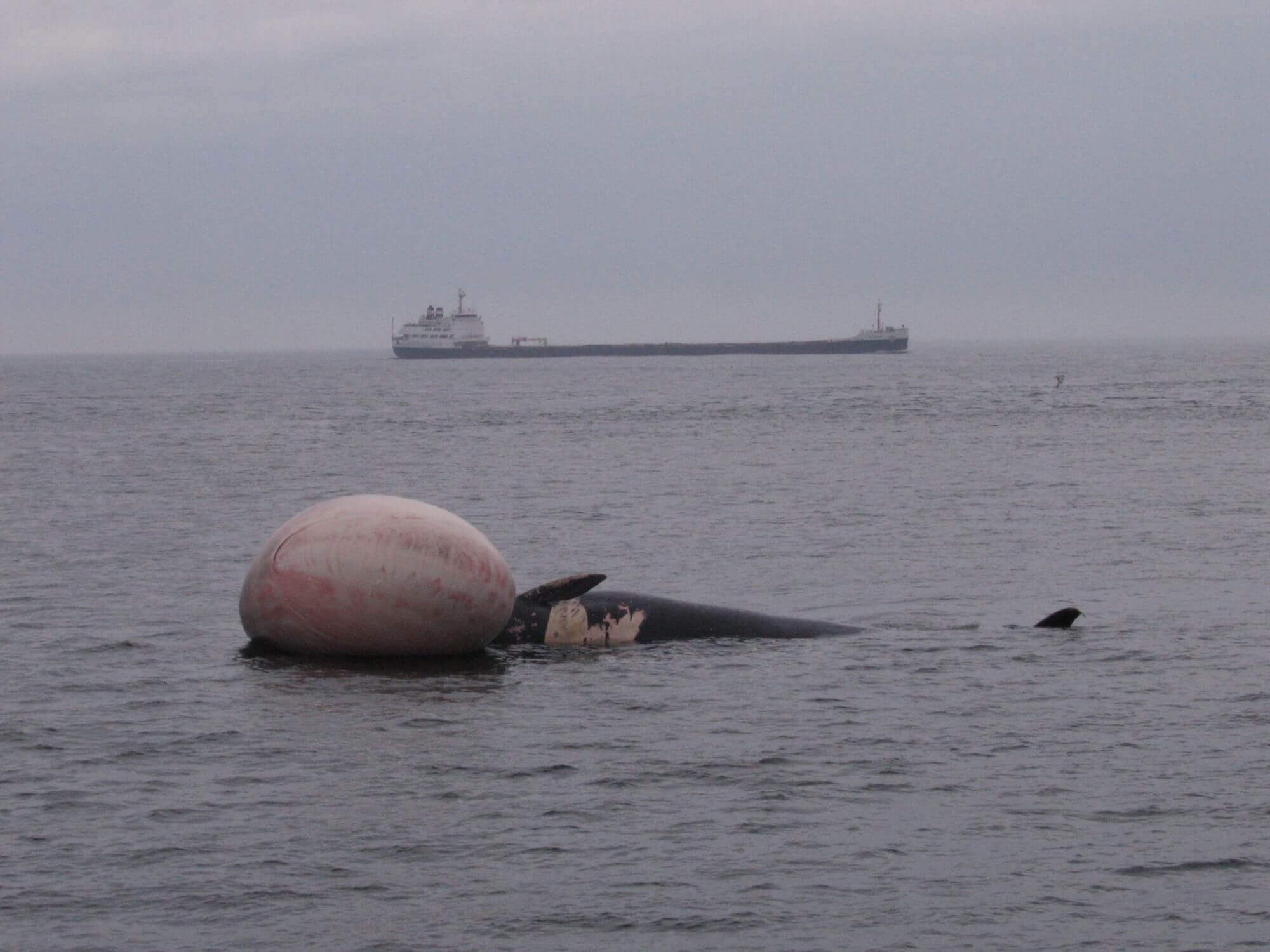 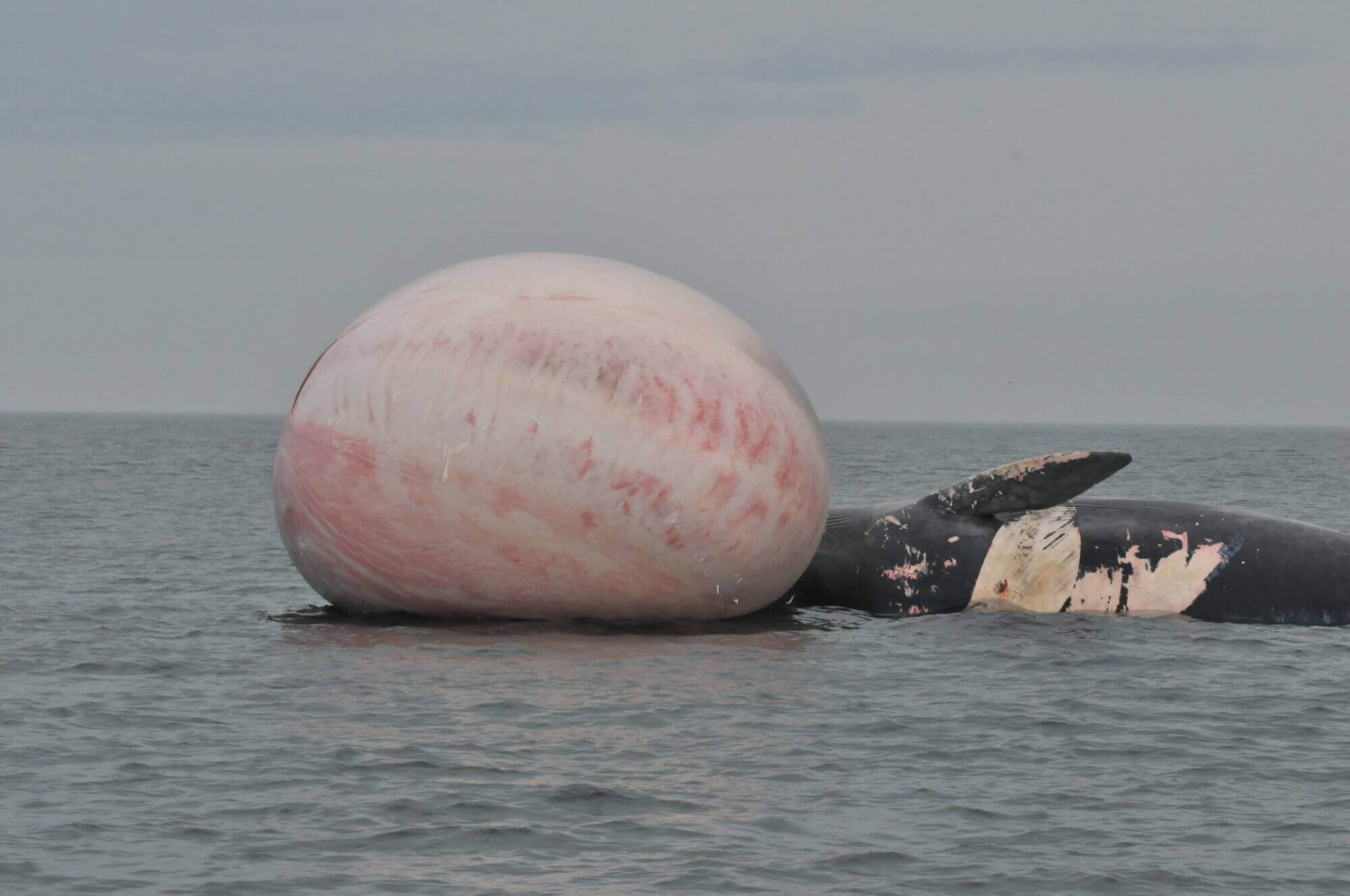 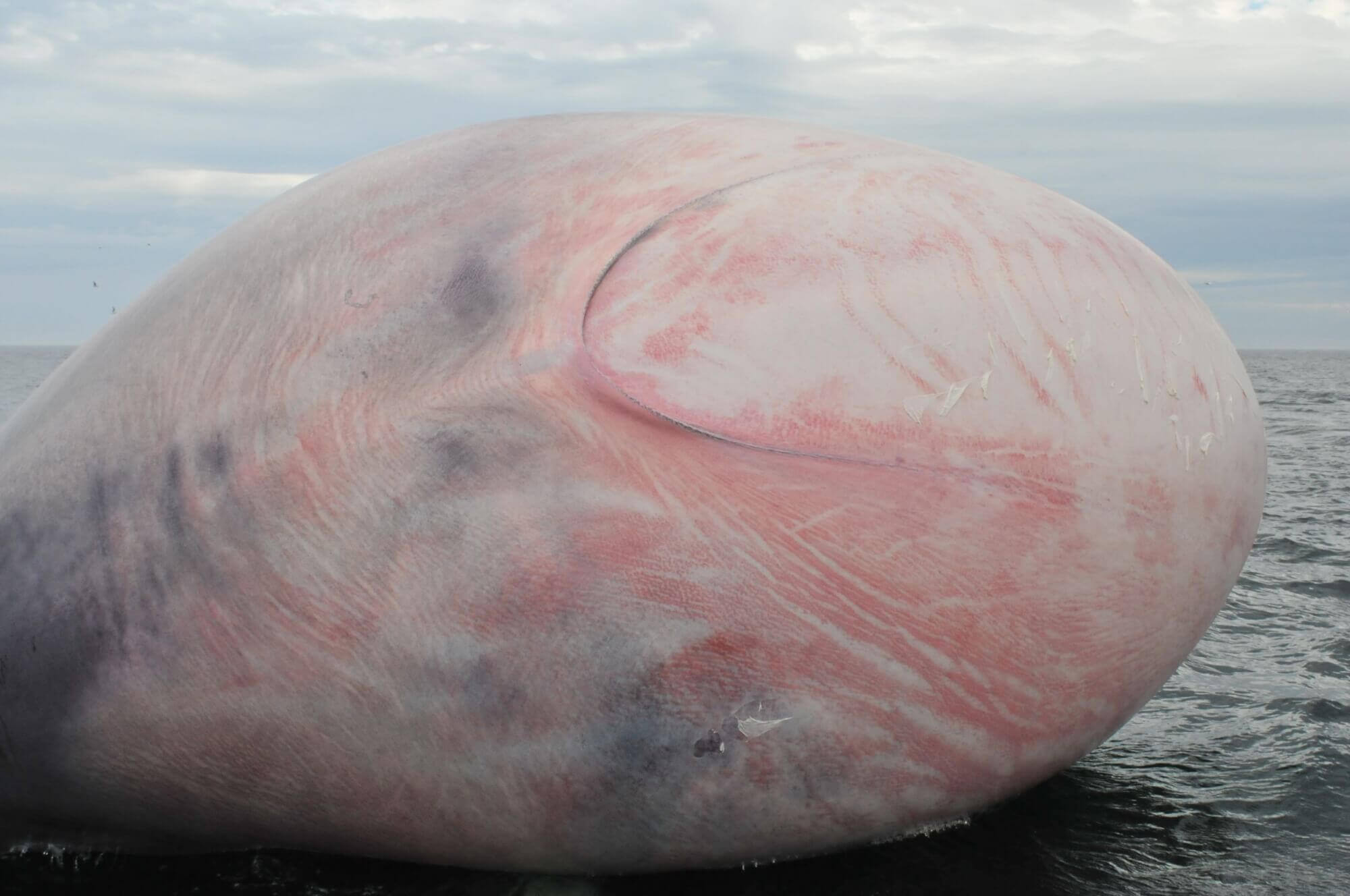 Certain clues can also be helpful for recognizing a sick or vulnerable whale. Emaciation is the most visible sign of poor health, as it means that the individual has not been eating properly. Living whales can also give off a rotting odour caused by the infection they are fighting. Such was the case of Perséides (article in French), a humpback whale last observed in 2010 and whose exhalations produced an unpleasant funk. If a whale is in discomfort, it may restrict its movements and swimming activity and therefore appear passive. On the other hand, it differs from a dead whale in that it will continue to breathe and dive for food, albeit less frequently. Thus, a resting whale is more difficult to distinguish from a sick whale than from a carcass. If in doubt, you can film the animal from a distance and contact Marine Mammal Emergencies to assess its behaviour.