Harbour seals in the “banana” position, where they lie on their sides while raising their heads and tails. © GREMM

This week, all up and down the St. Lawrence, humpback whales are topping the lists of observations, along with other species of cetaceans and pinnipeds. One individual wows spectators with a huge breach, others venture into the Saguenay and unidentifiable spouts are observed, not to mention harbour seals basking on the rocks and plenty of belugas.

As has been the case so many times this season, humpbacks have ventured into the mouth of the Saguenay. “Two humpbacks were seen yesterday in front of the Marine Mammal Interpretation Centre,” comments GREMM’s education director Patrice Corbeil. I don’t know how many humpbacks have swum up the Saguenay this season, at least ten I think…” One individual even performed a few breaches. There were also minke whales, belugas and harbour porpoises in this area teeming with marine mammals. “As a matter of fact, we were recently wondering, with so many porpoises offshore, why they are so seldom seen in the Saguenay,” enquires Patrice. “Although they do show up here from time to time!” 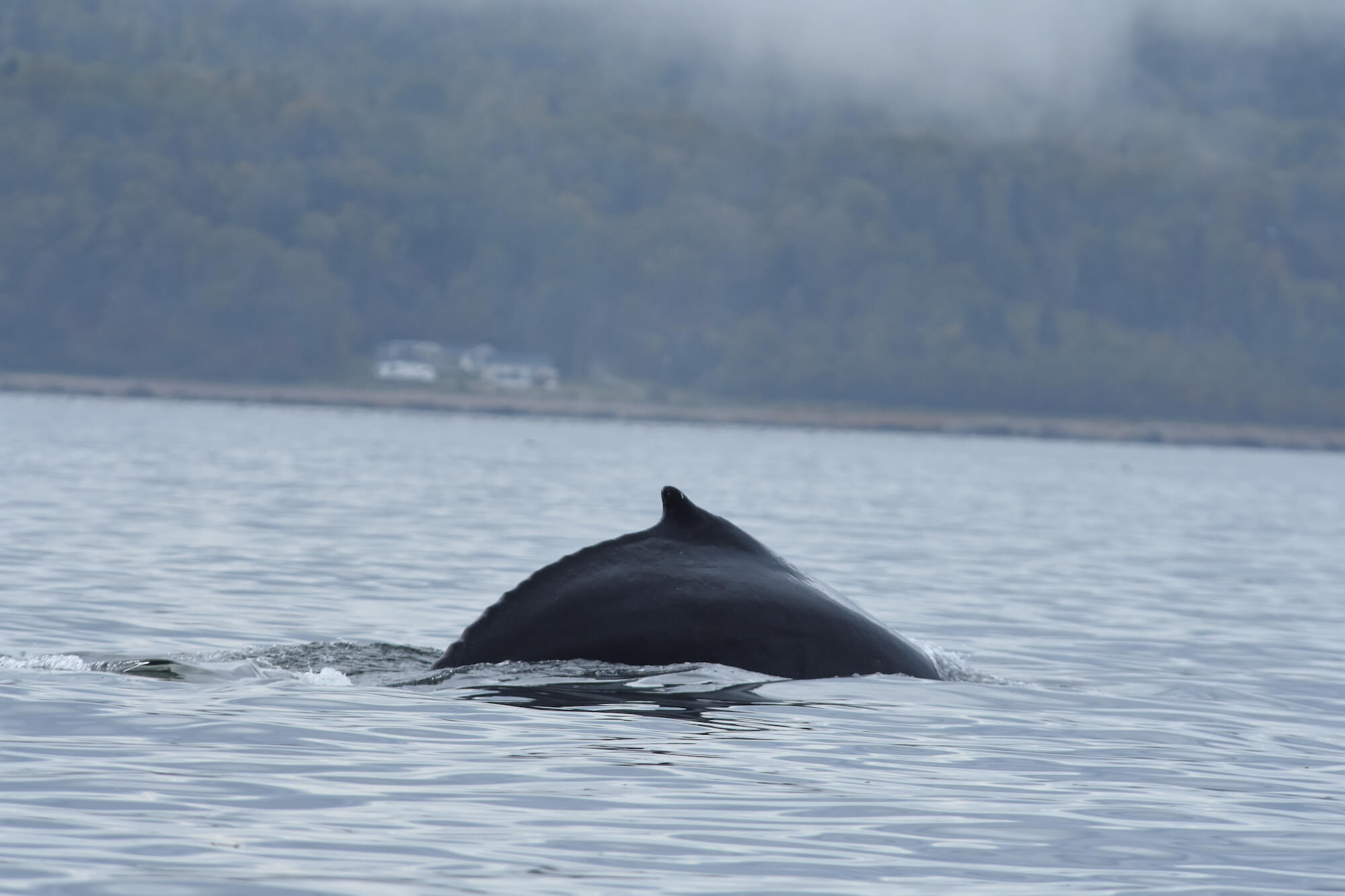 One of the humpback whales in the Saguenay this week. © GREMM 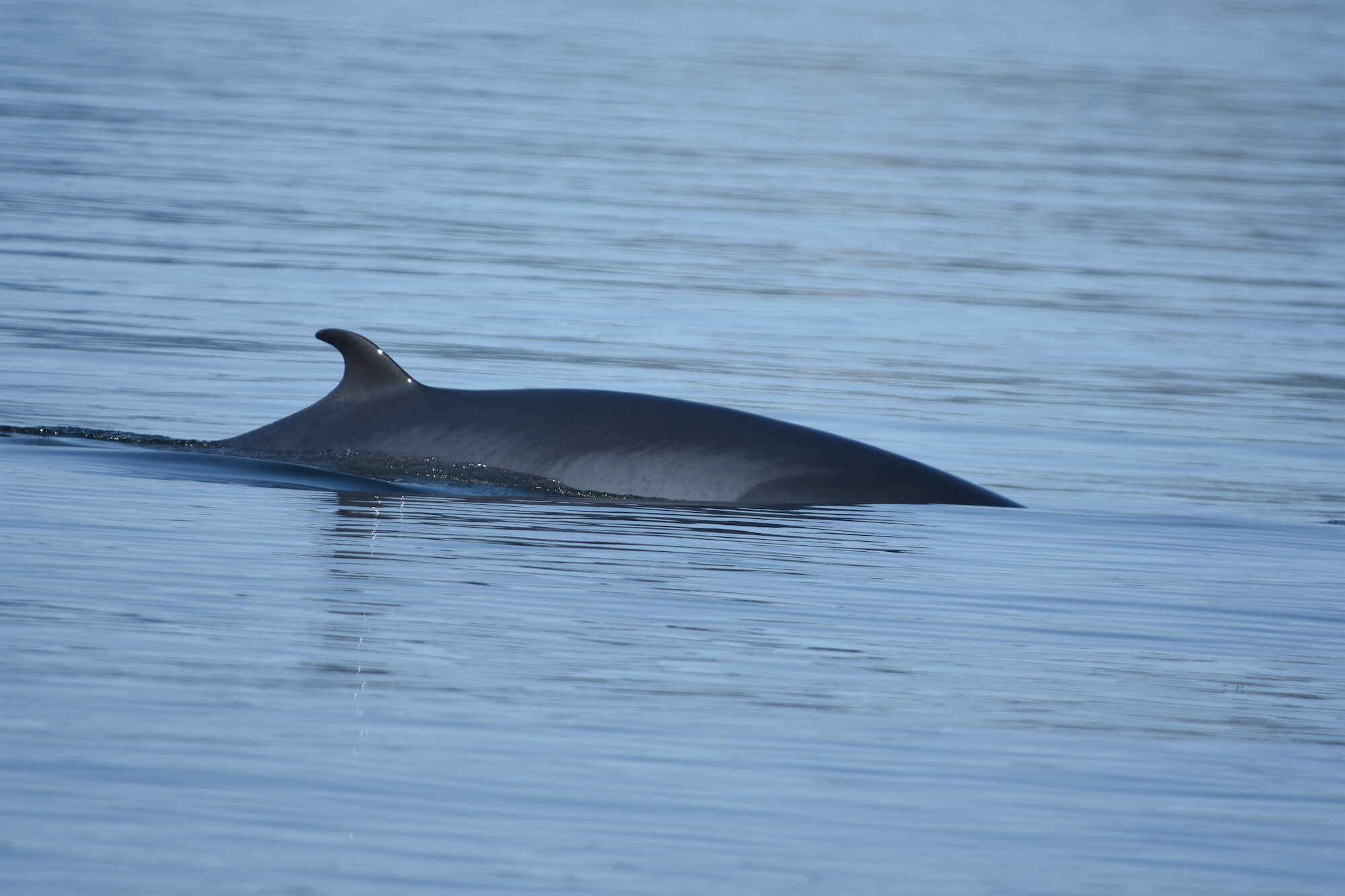 Minke whales often come to feed in the mouth of the Saguenay. © GREMM

Harbour seals and grey seals have been regularly observed in Gaspé Bay, at least when their presence is not overshadowed by minke whales or a few humpbacks offshore. In Grande-Vallée, a blast is spotted by a marine mammal enthusiast: “We caught a glimpse of a whale spout this Monday in Grande-Vallée, but never actually saw the animal. There was considerable chop, so we were unable to identify the species with certainty!”

It is sometimes possible to get an idea of the species simply by observing the animal’s spout. This is an old ID trick! For example, minke whales often have little or no visible exhalations while the breaths of larger whales can be spotted from afar. Fin whales have loud, powerful blasts measuring 4 to 5 metres high and often visible from a great distance, while humpback whales show a balloon-shaped spout. With the orifices of their double blowhole being spaced relatively far apart, right whales show a very distinct V-shape when they blow. Sperm whales, on the other hand, have an angled blowhole, which produces a powerful blast that sprays to the left of the animal’s head. 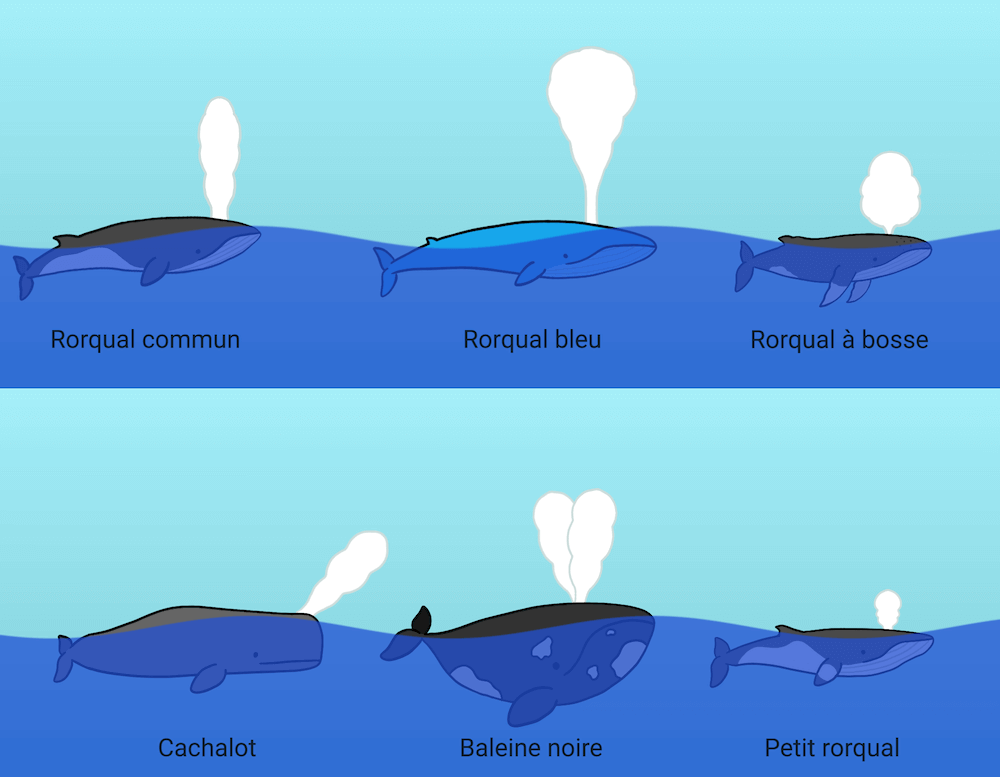 Species can often be recognized by their spouts. © GREMM

On the morning of September 17, photographer and naturalist Renaud Pintiaux had the chance to observe a humpback whale breach no fewer than 14 times. The next day, during another productive outing with marine mammals, Renaud crosses paths with a humpback and a fin whale offshore, not to mention harbour seals on the rocks. He also describes his encounter with two white whales: “It was really something to see two star belugas side by side near Cap de Bon-Désir – Pascolio and Néo – both of which show major spinal deformities.”

Pascolio has been known to GREMM since 1985, at which time she was two or three years old and still dark grey. Today, she belongs to the Saguenay community of females. The major deformities of her spine and the presence of a scar make her easy to recognize.

In Saint-Siméon, a humpback whale has been present for several days now, much to the delight of local residents who are enchanted by the observation of this magnificent creature. Between Les Bergeronnes and Les Escoumins, approximately 5 humpbacks, minke whales, harbour seals, harbour porpoises, a group of 50 white-sided dolphins and a fin whale have been reported.

There’s no shortage of sightings in the estuary, either: “Last Monday, on our way to Rimouski,” explains one observer, “we came across an area chock full of marine mammals: grey seals, belugas, porpoises and even dolphins. They were everywhere.” In Franquelin, it is mainly minke whales and seals that have been observed. 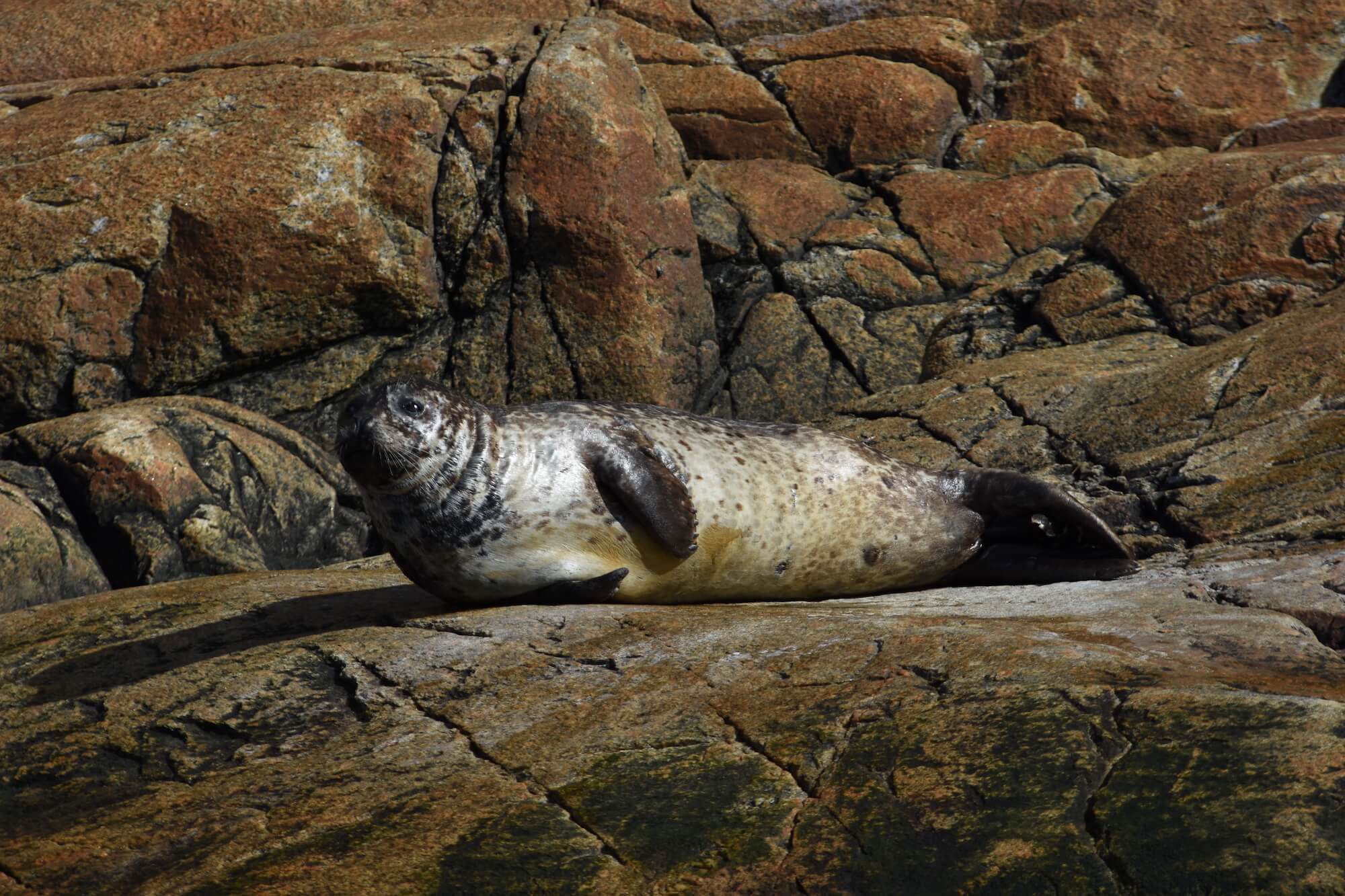 The harbour seal is the smallest pinniped that frequents the St. Lawrence. © GREMM 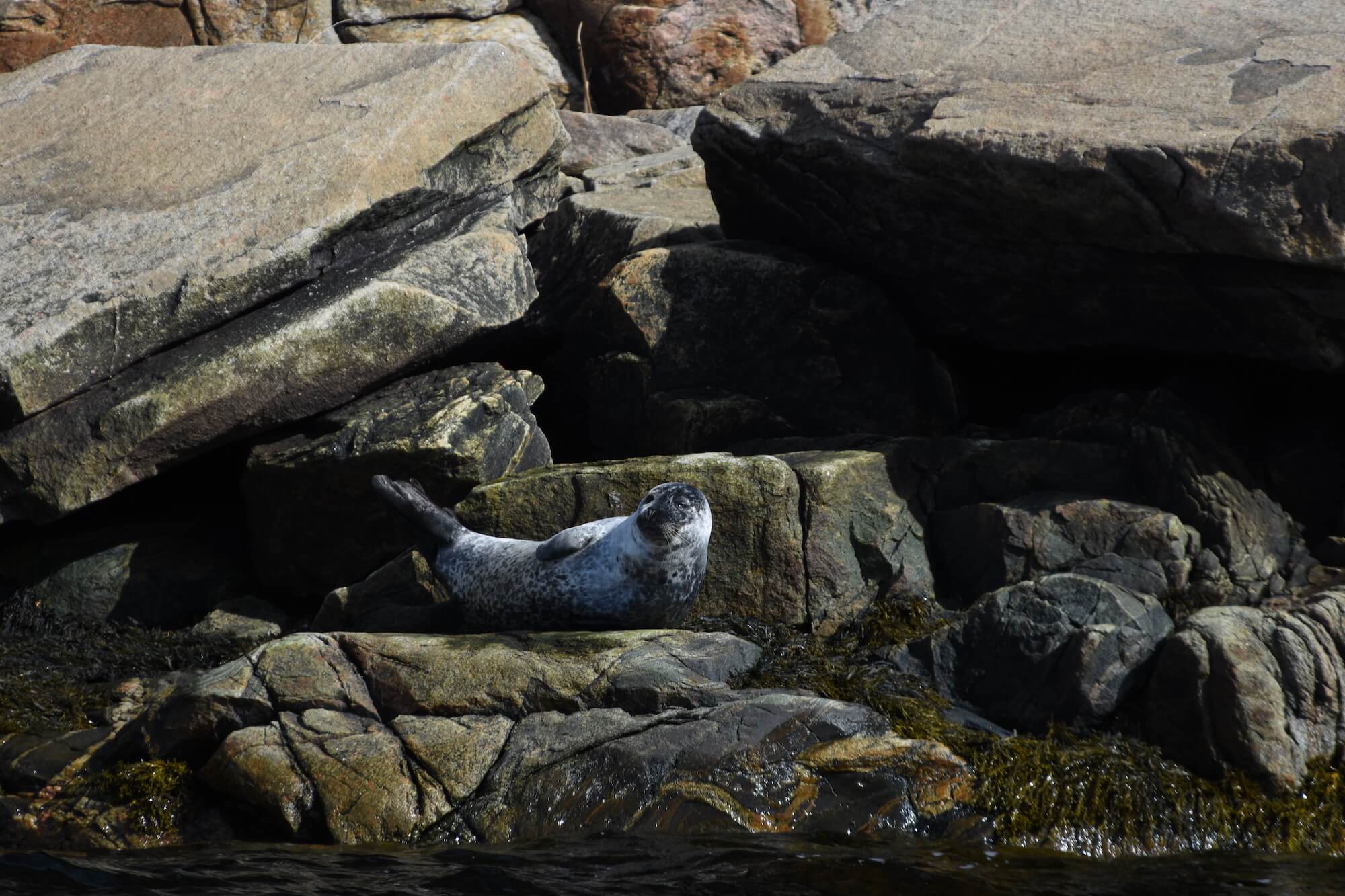 At the marina in Baie-des-Sables, an early morning walker is lucky enough to spot a few belugas. He shares his experience: “While I was out for my morning stroll on the “rosebush” trail in Baie-des-Sables when I saw a small pod of belugas about 100 metres from shore. It was a choreography that lasted more than 30 minutes. That’s the first time I ever saw belugas so close. It was an indescribable joy that I savoured with amazement and awe.”