The future is an increasingly gloomy one for the North Atlantic right whale, an endangered species whose numbers have been declining since 2010. Right whales are victims of entanglement in fishing gear (ropes and traps), ship strikes and a degrading environment. Conservation of the species adds new constraints to the snow crab and lobster fisheries as well as maritime traffic. The North Atlantic right whale is an endangered species and is protected by Canadian and US laws. How can humans learn to coexist alongside marine mammals without jeopardizing their survival?

In 2017, a record 12 right whale carcasses were found in Canadian waters, namely in the Gulf of St. Lawrence. Since 2017, measures have been applied to mitigate anthropogenic impact on the species. However, about ten or so new cases were identified again this past summer, further aggravating the precarious status of this endangered species. This year, seven births were recorded, but 10 mortality cases were also confirmed (9 carcasses found in Canadian waters and 1 in the US). The population now numbers only around 400 individuals.

“This is likely related to rapid changes in conditions along the Atlantic coast, particularly in the Gulf of Maine, which is warming faster than 99% of the rest of the world’s ocean surface, in addition to human pressure,” explains Russ Charif, senior bioacoustician at the Center for Conservation Bioacoustics for the journal Global Change Biology (2019).

This new overlap with fishing grounds and shipping lanes in the colder Gulf waters presents new challenges for Canadian fisheries. Watchword: Maritime Canada must review its methods to minimize its impact on North Atlantic right whales, otherwise the species could suffer further impacts. Concerned scientists have been gathering in order to identify solutions and prevent the species from becoming extinct. Furthermore, right whale protection is an essential criterion for seafood to be certified sustainable, a designation required for exports to the US in addition to being sought by Canadian consumers.The decade or so of cohabitation experience between whales and the fishing industry in the US can be used to inspire measures in Canadian waters.

How is the Canadian industry adapting?

There are higher-risk areas where whales congregate and “rub fins” with areas frequented by crab and lobster boats as well as shipping traffic. To lower the risk of both entanglements and collisions, Fisheries and Oceans Canada imposes areas where fishing is prohibited and Transport Canada limits the speed of certain vessels in certain areas and during certain times of the year. “In response to the North Atlantic right whale mortalities, the team has increased its targeted surveillance efforts; survey flights over Canadian waters went from 5 to 10 a week in the summer of 2019,” points out Fisheries and Oceans Canada in an email exchange with Whales Online. 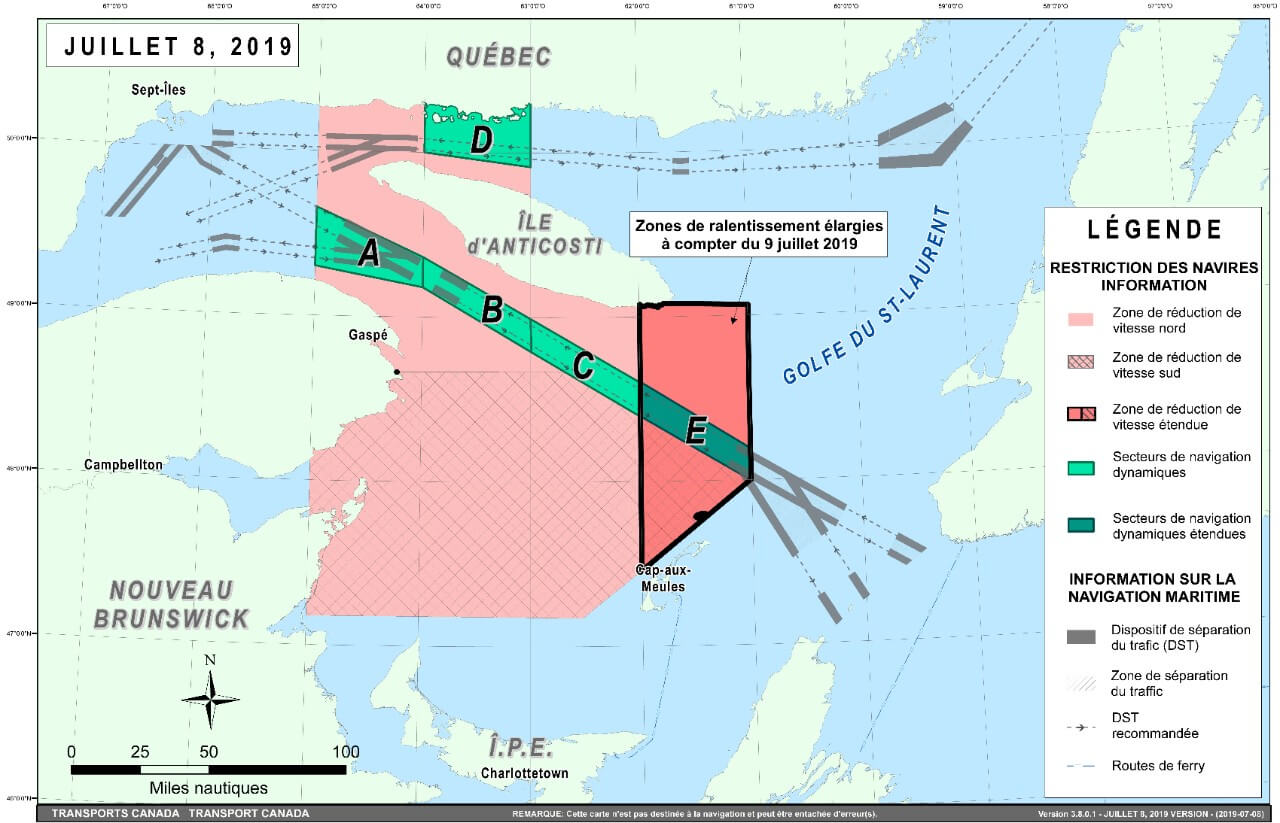 The fishing industry is already having an impact, even if the seasons are short-lasting and heavily regulated. Fisheries and Oceans Canada bases its measurements on data provided by inventories from previous years. However, whales did not visit the areas frequented in 2018 with the same intensity due to the variability in their distribution. Fishermen would like to see closings carried out on a dynamic basis beginning with the confirmed presence of right whales. In 2019, one fishing area that was highly popular in 2018 was off limits from April to November despite the fact that no right whales were noted there, while other areas were closed for 15 days only when a right whale was spotted in the vicinity. “The management model isn’t perfect yet, everyone is adapting to this new reality,” notes Lyne Morissette, biologist and ecologist who works with fishermen on mitigation measures in Atlantic Canada and the Gulf.

As for the 10-knot speed limit, 19 fines were issued for speeding offences. Transport Canada has a total of 5,279 monitored vessels that have operated within the speed limit zones. Overall, the maritime industry therefore seems to be collaborating in North Atlantic right whale protection efforts.

On November 7, at a roundtable in Moncton, New Brunswick, on the results of fishery management measures for whale protection, the industry indicated that it would like to see the snow crab season start earlier, which could be made possible through the use of icebreakers. “If a qualified supplier is designated, a contract for icebreaking services will be put into place,” explains the ministry. This would make it possible, beginning in 2020, to optimize as much as possible the scale of fishing activities that are permitted to take place before the first North Atlantic right whales arrive. “In spring, everyone is ready to head out to sea 3 weeks before opening day. This would avoid being out at sea when the whales arrive and the government thinks this is a good option,” says Lyne Morissette.

At the internationalheld in Portland, Maine on November 14 and 15, 2019, coordinated efforts with several Canadian stakeholders were applauded by international players, points out Lyne Morissette. “The department is working closely with the United States National Oceanographic and Atmospheric Administration (NOAA) and has established a Canada-US bilateral working group on the North Atlantic right whale,” adds Fisheries and Oceans Canada. Solutions are multiple, come from a variety of sectors, and must encompass the species’ entire range.

Once again, the North Atlantic right whale dossier is testimony to the complexity of coexisting with the natural world on a planet in constant flux. “There is something to be learned from this issue; this species will at least have taught us to cooperate and work together,” underscores Lyne Morissette.