Are sonars used to locate whales? 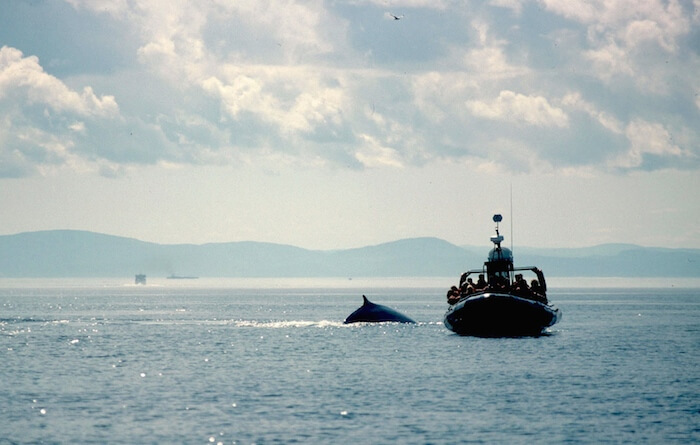 From the inflatable boat to the large ferry, every whale-watching boat is equipped with a radar and a sonar. While radar is used to probe fog and detect objects on the surface, sonar is employed to explore the seabed.

A sonar system generally emits ultrasonic pulses by means of an apparatus located on or in the hull. These electrical pulses produced by the transmitter are converted into sound waves and then sent into the water. The mechanical waves thus travel through the water and bounce back as soon as they strike an object. The echo then returns to the probe. The sonar converts it into an electrical signal that is amplified by the receiver and then sent to the screen. Since sound velocity in water is constant, the elapsed time between signal transmission and reception of the echo can be measured and used to calculate the distance of the object.

Invented by Paul Langevin and Pierre Curie during World War I, this system is primarily associated with military applications. It is designed to detect submarines and mines.Most of today’s boats have them. Fishermen use them to locate schools of fish, industrialists to detect oil deposits and scientists to map the seafloor and underwater relief. In the St. Lawrence they are employed mainly for navigation. Called bathometers, they specialize in measuring the height of the water: a signal is emitted vertically downwards and the time delay of the echo returned from the bottom is then measured. In addition to indicating water depth, sonars help captains avoid rocks and other obstacles. Unlike military sonar and the disturbances it causes, bathometers can operate at low ranges and are harmless to cetaceans. 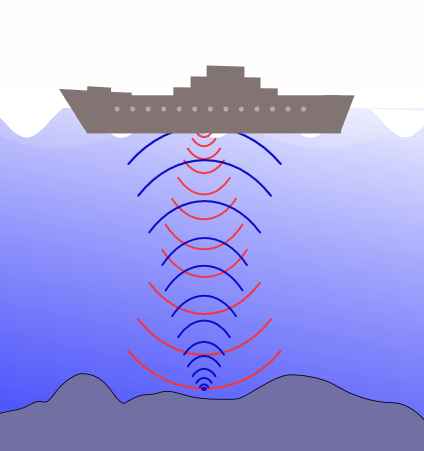 Bathometers are used to map the seafloor. © Wikimedia Common

Can they be used detect whales?

The sonar systems present on whale-watching boats do not operate with the goal of locating whales.
They can detect them if a cetacean passes under the boat at the right time, but the animal’s spouts will probably already have been spotted at the surface. Visual observation therefore remains the most effective way to find whales. Certain clues are used by captains to increase their chances of encountering them. Large numbers of birds or seals at a given location often indicates an abundance of fish and therefore food for whales. It is also possible to identify nutrient-rich upwelling zones, which create a boundary line between different water bodies that is visible at the surface. Boats also communicate with one another and share their observations. 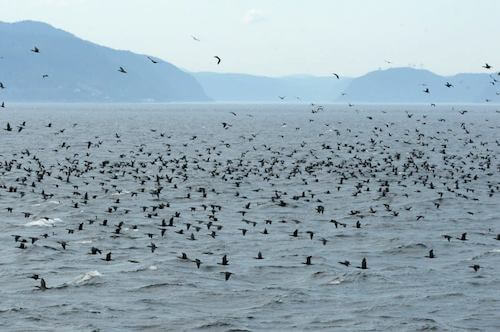 The cormorants' presence can serve as an indicator to find whales. © Renaud Pintiaux