Blue whales are not really blue... they have a light grey mottled skin! © René Roy

That might sound like a funny question! After all, isn’t the blue colour of Balaenoptera musculus, in addition to its enormous size, the trademark feature of these giants of the sea? Not exactly. In reality, blue whales are not really blue: instead, their skin is light grey and speckled! If that’s the case, how did they get their name?

As a matter of fact, the blue whale is blue for the same reason the ocean is blue! Indeed, water acts like a filter for light: when light rays enter the sea, the red, yellow and green parts of the light spectrum, which have a shorter wavelength, are quickly absorbed and do not penetrate very deep into the water column. The colours in the blue part of the light spectrum, on the other hand, have a longer wavelength and thus go much deeper. Therefore, when an individual belonging to the species B. musculus is under water, its pale skin reflects the main light that reaches it, namely blue light. Its colouring is therefore rather deceptive due to the interactions between water and light! 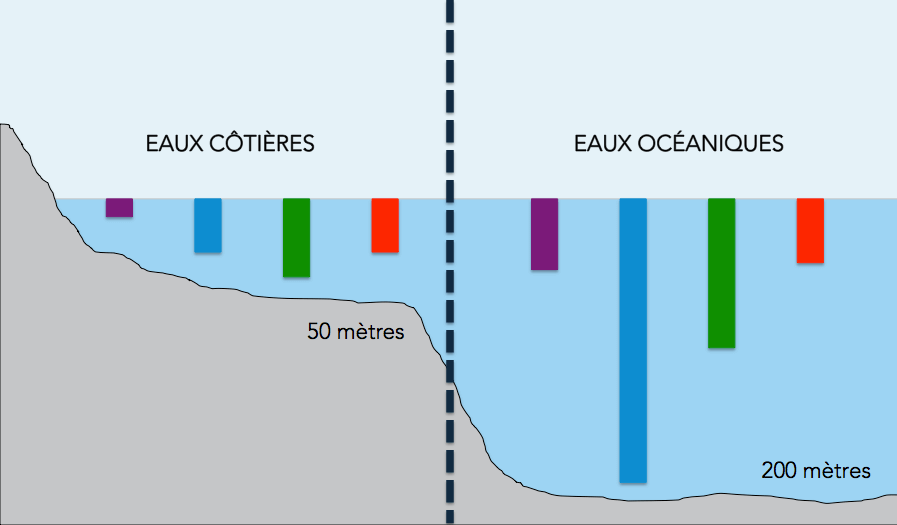 Moreover, blue whales have not always been associated with their namesake colour. For some time, they were even associated with the colour yellow! In the 19th century, American author Herman Melville nicknamed these mastodons “sulphur bottoms,” a term that was also widely used by American whalers at the time. Indeed, colonies of diatoms (phytoplanktonic algae) can develop on the bellies of blue whales, giving them a sulphur-like yellowish colour, hence this now archaic name.

The rarity of blue in nature

Blue is a very difficult colour to find in nature, as there is no naturally-occurring compound to colour living things blue. Yet there are plants and animals that sport vivid hues of this colour. But this is what is called a “structural colour,” meaning it comes from the interaction of light with the micro- and nanostructures found on an organism’s skin, fur or feathers. For example, peacock feathers contain microscopic ridges that interfere with light, cancelling out some wavelengths and magnifying others, hence their iridescent blue colour. As for the blue whale, however, it is not a structural colour, but rather the action of light on the water that gives it a bluish tint. 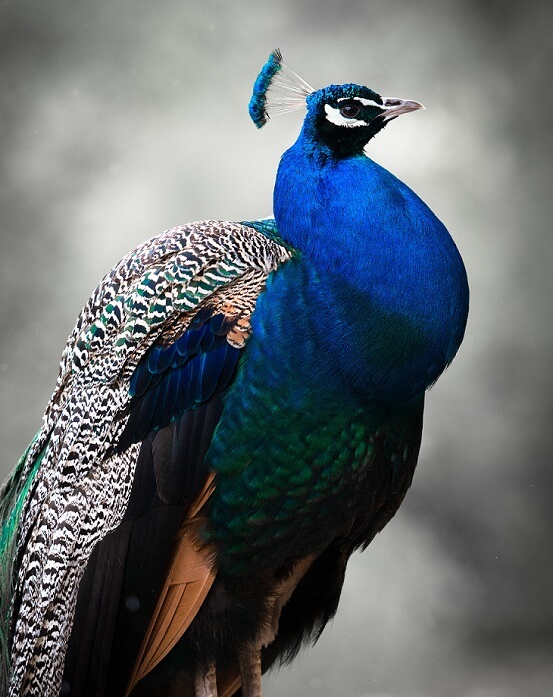 Blue is a rare color in nature! © Creative Commons

Not only do blue whales appear blue when observed from the surface, but also when viewed under water, where this effect is just as stark. They blend in with the cobalt ocean fog and are quite difficult to spot from afar. This therefore begs the question of whether the blue whale derives some sort of advantage from this colouring. Might it serve as camouflage for hunting or for evading enemies? Not necessarily! “The aquatic world is first and foremost an acoustic universe. Hearing often plays a more important role than sight in this context,” explains Richard Sears, president of the research centre MICS. “For example, if a blue whale is targeted by killer whales, which are one of its few predators, the latter have heard it long before they ever lay their eyes on it. Visually blending into its environment is therefore useless for the blue whale, since it has already been detected by other means,” he continues.

And it goes both ways. If blue whales’ colouring gave them some sort of advantage when foraging for food, then it would have an impact on their hunting success. In such a case, natural selection would favour a certain degree of colouration. However, this is not what we observe. “Pigmentation varies considerably between individual blue whales, so there is a chance that there is no connection whatsoever with their survival,” concludes Richard Sears.

Lastly, this trait may not have an adaptive or evolutionary function at all. “It could simply be a trait that has remained in the species because it is linked to another gene that has been subject to selection pressure. This phenomenon is called “selective hitch-hiking,” explains GREMM Scientific Director Robert Michaud.

But even if we don’t know why blue whales have this characteristic tint, and it may or may not offer them any benefit, the advantage for us is that we can easily differentiate them from other whales!