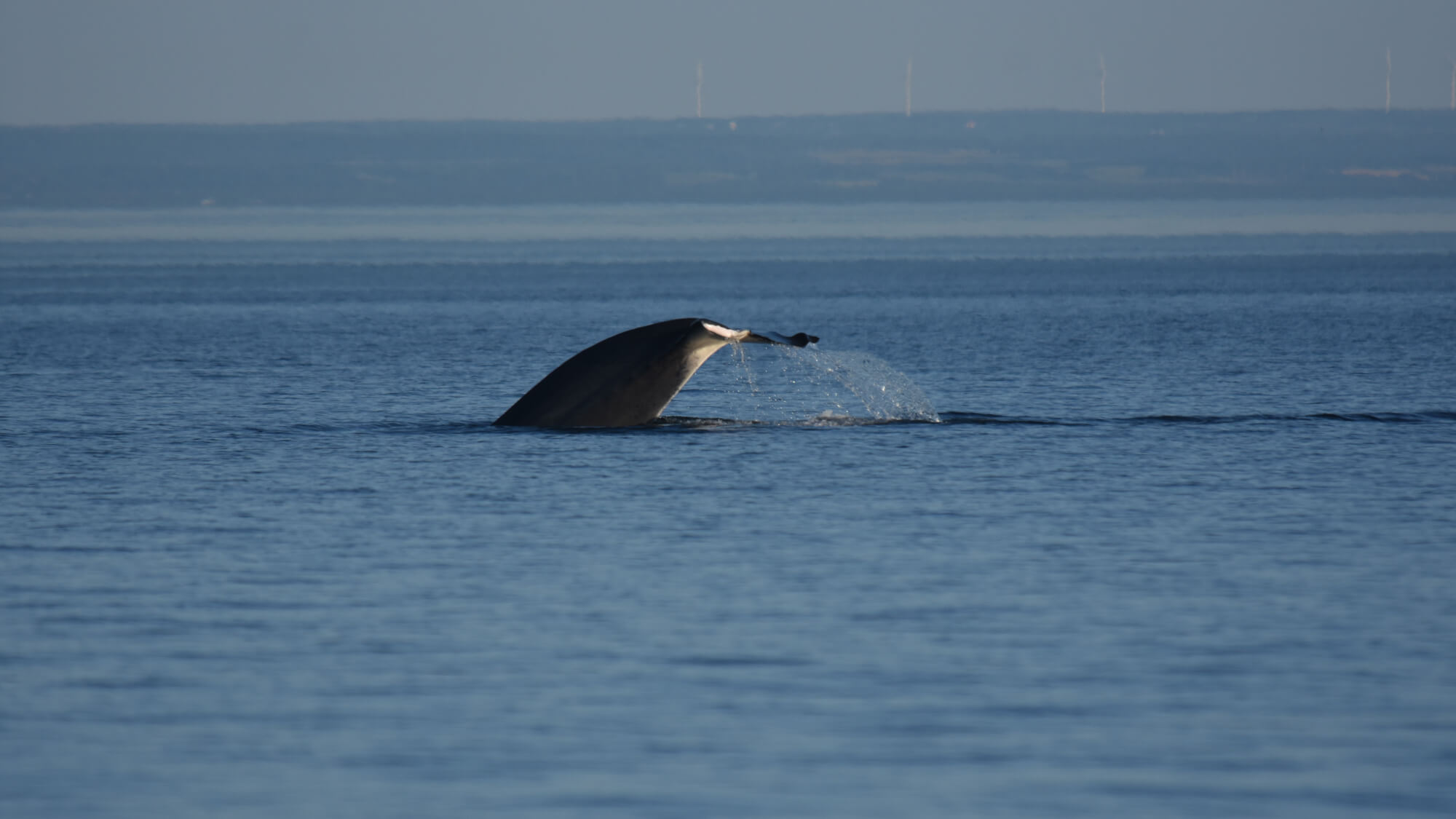 In 2017, a fin whale with a half caudal fin will visit the St. Lawrence Estuary. © GREMM

GREMM research assistants photograph a group of belugas. Upon closer inspection, they make a surprising discovery: one of the animals is missing its tail! Instead of the usual two lobes of the caudal fin, this beluga, still unknown to the research team, has a white stump. We will have to encounter it again in the Estuary to try to learn more about how it was injured and how it has adapted to its handicap. This is not the first time a tailless whale has been observed, but such cases remain exceptional. 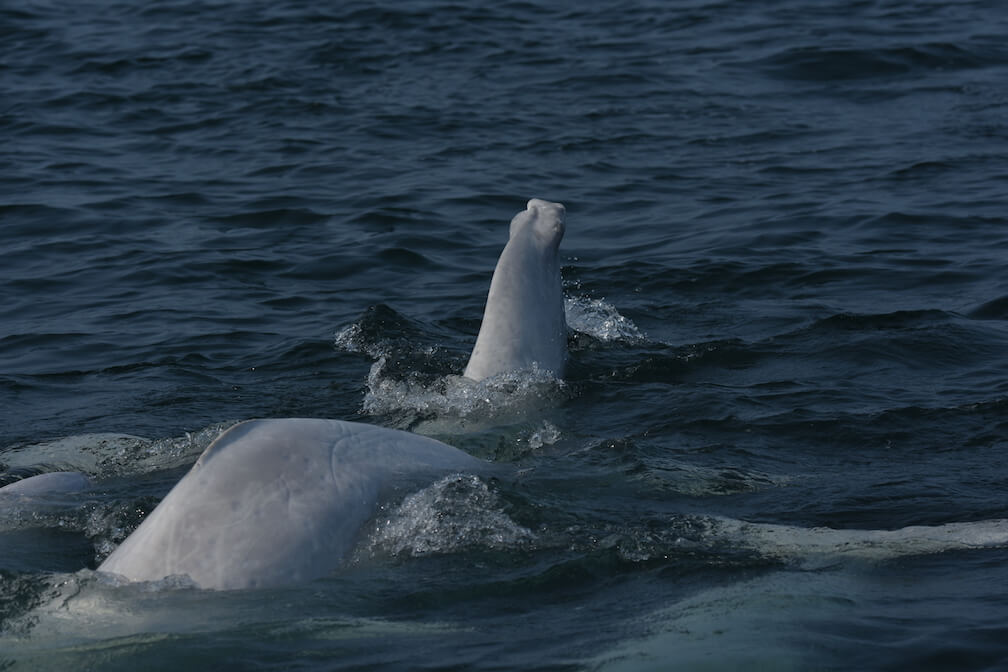 A tailless beluga whale is observed in the St. Lawrence Estuary on August 13, 2018. © GREMM

Since January 2018, no fewer than three grey whales without caudal fins have been sighted along the California coast. One thing is for sure, these animals weren’t attacked by sharks or killer whales! On the contrary, it seems their amputation is due to entanglement in fishing gear. When swimming through rope or nets, whales can end up with material stuck at the base of their tail. Depending on the severity of the entanglement, the rope will gradually cut through the caudal fin or cut off blood circulation until tissue necrosis sets in.

According to marine biologists, the prognosis for a tailless whale is not encouraging. A majority of injured individuals are believed to succumb to the loss of their caudal fin. A disabled whale must overcome many challenges, including less efficient foraging and swimming, which could be particularly troublesome during migration. For a mother with a young calf, the lack of a caudal fin might also mean that she will not be able to defend her offspring against killer whale attacks.

However, some animals manage to overcome these difficulties and adjust to their disability. In 2017, a fin whale with half its tail missing (article in French) visited the St. Lawrence Estuary. In California, the three grey whales overcame the absence of their caudal fins by turning onto their side when breathing and contorting their bodies like a corkscrew to gather enough momentum to dive. 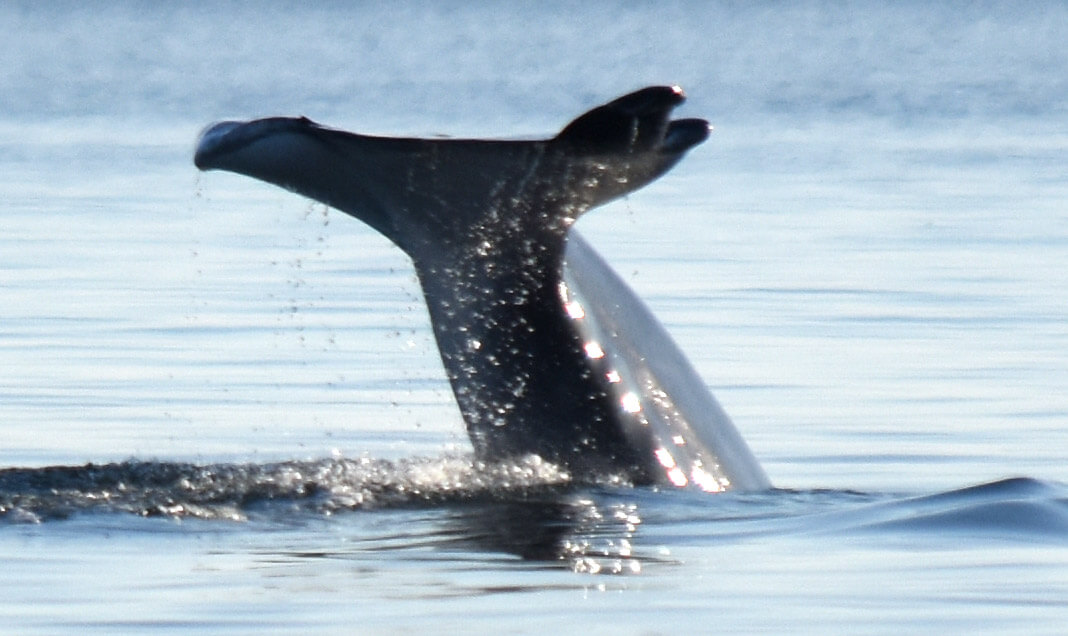 Even Hollywood is taking an interest in disabled whales. The film Dolphin Tale is based on a two-month-old dolphin discovered in 2005 in Florida. The caudal fin of the young female is severely severed by a rope attached to a crab trap. Even if she was promptly brought to the Clearwater Marine Aquarium for treatment, Winter the dolphin ended up losing her tail. Despite her disability, she can still swim and dive: she wiggles from side to side like a fish and uses her pectoral fins like oars. Two years later, to prevent this type of movement from putting too much stress on her spine, Winter received a prosthetic caudal fin. She then began to swim like a real whale, flapping her tail up and down. Ten years later, Winter, thanks to her plastic tail, is still swimming in the aquarium. 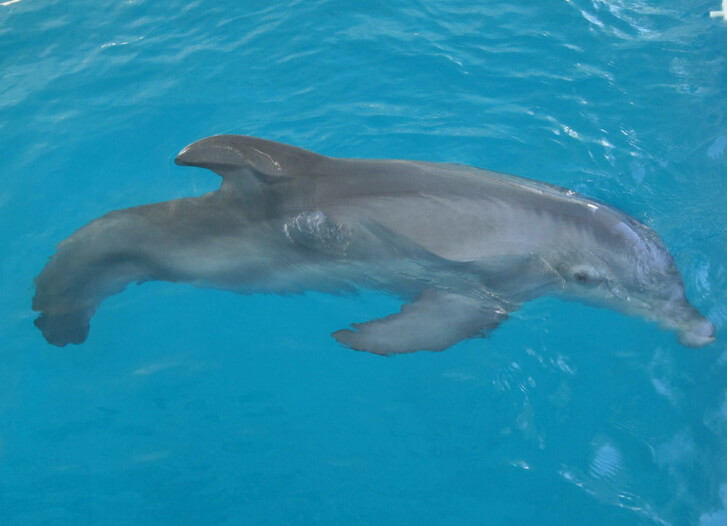 Winter, a dolphin without a caudal fin, received a prosthesis in 2007 to make swimming easier. ©Ula0601/Wikimedia Commons

If tailless humpbacks are never reported – despite the species being a frequent victim of fishing gear entanglements – it may simply be because they do not survive long without a caudal fin. Large rorquals have a special feeding technique that requires a powerful tail in order to engulf an enormous amount of water and food. Without it, these whales may be doomed.