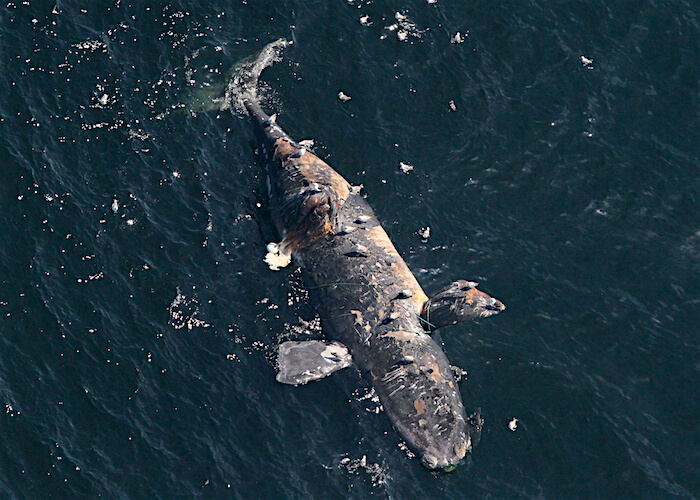 The Marine Mammal Emergencies call centre has already handled nearly 200 cases and just over 350 calls this year. These figures are a reminder that the team behind 1-877-7baleine has been working non-stop and that other cases of struggling or stranded whales are surely still to come. Thanks to the renewed collaboration of local residents who have taken the time to report the presence of dead or vulnerable animals and the notable involvement of the network of volunteers(article in French) who also greatly contributed, UMM has been able to continue its mission. Volunteers invested over 130 hours in the field to document cases, inform citizens and collect scientific data on seals and whales. This level of commitment is also testimony that the partners of the Quebec Marine Mammal Emergency Response Network and their peers in the Maritimes and in the United States still have issues to be resolved and formidable conservation challenges.

Since June 6, between 13 and 15 right whales have been found dead (article in French) in US and Canadian waters, four times the average of recent years (typically 3.8 mortalities a year).

Preliminary results regarding the causes of mortality in four of the animals were released following necropsies conducted in Prince Edward Island and the Magdalen Islands: three whales died as a result of a collision and one is believed to have been the victim of entanglement in fishing gear. We will have to wait a few more weeks before the release of a more comprehensive report on the situation summarizing the observations and knowledge of veterinarians and experts on the species. Last Friday, representatives of the National Oceanic and Atmospheric Administration (NOAA) announced that the United States is launching its own investigation into the death of these whales.

In addition to these unprecedented mortalities, two disentanglement attempts were made for this species, namely on July 5 and July 10. The second intervention cost the life of fisherman Joe Howlett of the Campobello Whale Rescue Team, a tragic incident that triggered a reassessment of whale rescue activities in Canada and the United States.

Another endangered species, the St. Lawrence beluga, has also experienced a high mortality rate, particularly in newborns. As of August 28, 16 beluga carcasses have been studied in the St. Lawrence, including 8 adults and 7 newborns (possibly 8, to be confirmed by dental analysis). Every season since the Beluga Carcass Recovery Network was created over 20 years ago, between 15 and 20 carcasses have been reported annually.

Of particular concern to the scientific community since 2010 is the increase in mortality in newborns. “The causes of this uptick in mortalities are still unknown,” says Robert Michaud, coordinator of the Quebec Marine Mammal Emergency Response Network and beluga expert. This season, two carcasses were found in good condition and will be able to be studied in detail at the Université de Montréal’s Faculty of Veterinary Medicine by our colleague Stéphane Lair and his team. These necropsies are essential to shedding light on this worrying situation.” The year 2012 was particularly alarming, with 16 newborn deaths recorded. Between 2013 and 2016, four to six newborn deaths were recorded per year.

Dead whales on shore and at sea

While the Côte-Nord and Gaspésie regions were the scenes of beached whale carcasses, other strandings involving minke whales occurred farther upstream at Rivière-Saint-François in Charlevoix, Berthier-sur-Mer and Lévis. Three fin whales were found drifting in the Gulf of St. Lawrence and a juvenile humpback washed ashore last spring in Godbout. It was recovered by the Group for Research and Education on Marine Mammals (GREMM), which plans to add it to its skeleton collection at the Marine Mammal Interpretation Centre (CIMM) in Tadoussac.

The Marine Mammal Emergencies Team continues to work 7 days a week throughout the year, since even though the majority of cetaceans will leave the area in late fall, cases of live stranded animals may still occur in fall during periods of stormy weather and strong tides. Beluga carcasses may still be discovered in the months to come, and even in winter, as they are year-round residents of the St. Lawrence. With the return of pinnipeds for the winter, it’s safe to bet that young and adult seals will be reported, relaxing in unusual and high-traffic places! A season for the record books, which is far from over for Marine Mammal Emergencies and for lovers of the St. Lawrence. 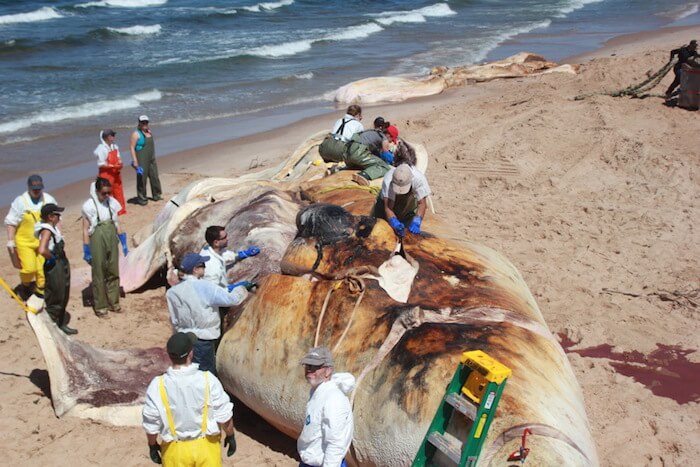 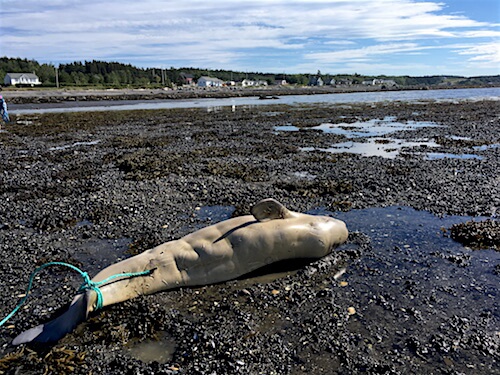 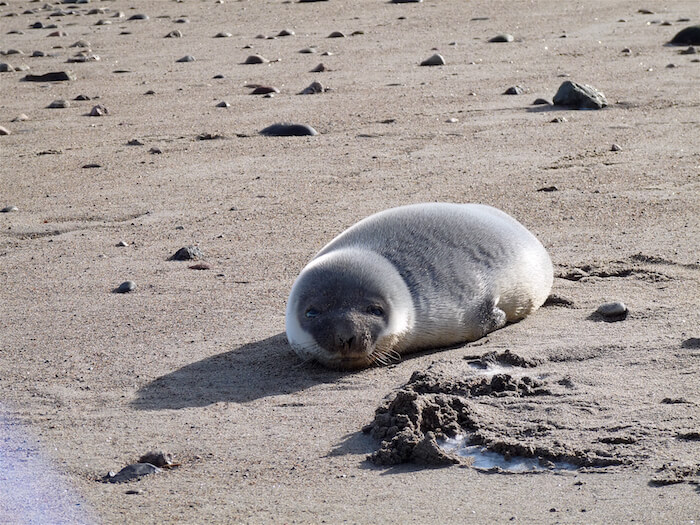