A diver caught in a whale’s mouth? 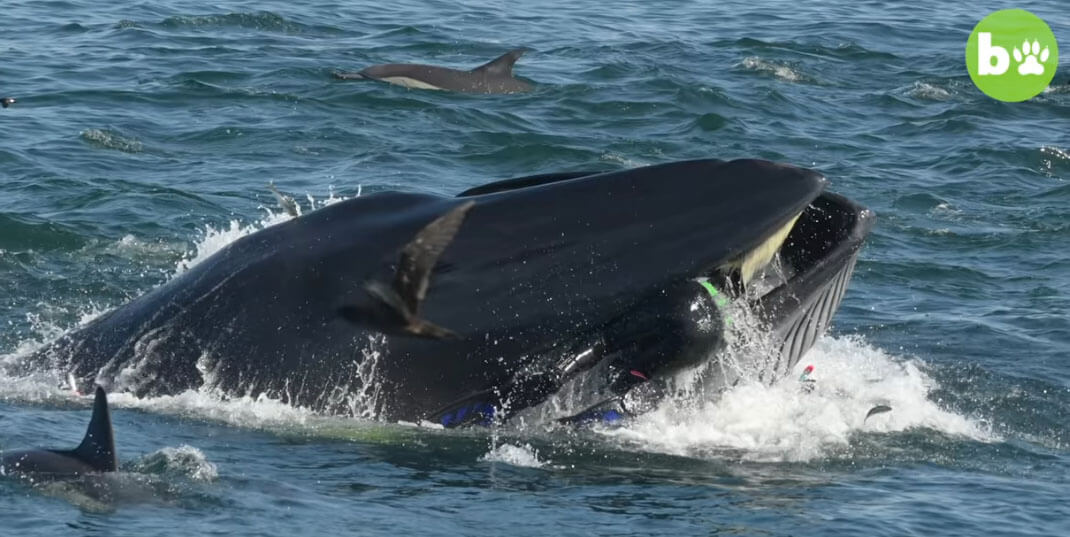 While feeding at the surface, a Bryde’s whale accidentally snatched up a diver, who found himself, from the waist up, inside the whale’s mouth! At the time of the events, the diver was working on a documentary on sardine migration off the coast of South Africa. The incident was filmed by the boat crew.

Fortunately, he escaped safe and sound: a few seconds later, the whale opened its mouth, freeing the diver. Could the whale have tragically swallowed the diver?

The Bryde’s whale is a baleen whale found in tropical waters. It can reach up to 15 metres long. Like the blue whale or humpback whale, the Bryde’s whale feeds by filtration: it opens its mouth wide around a school of fish and water rushes into its expanded ventral pouch. Then, closing its jaw, the whale expels the water. Prey are trapped in the whale’s mouth thanks to baleen, which act as filters. Bryde’s whales feed on crustaceans and small fish such as mackerel, herring and sardines.

It is unlikely that this mishap could have ended with the diver in the animal’s belly. In fact, because a whale’s esophagus is adapted to the size of its prey (article in French), it is impossible that a human would end up in their stomachs. But the consequences could nevertheless have been serious. A whale’s jaws being as powerful as they are, the diver could have suffered fractures. Also, the diver could have drowned had he remained trapped for too long.

The best way to avoid accidents is to maintain one’s distance from whales. In fact, Fisheries and Oceans Canada’s Marine Mammal Regulations prohibit deliberately approaching within 100 m of a marine mammal as well as swimming with a marine mammal for the purpose of interacting with it.