A number of studies show that in different species of baleen whales, mothers and their offspring communicate in a very special way: they whisper…

Compared to when she communicates with other adults, a mother communicating with her calf will use lower amplitude sounds, i.e. sounds that are less loud in terms of decibels. The calf also uses lower amplitude sounds. This appears to be the case for humpback whales and southern right whales, and the findings of a recent study suggest that whispering might also be used by North Atlantic right whales.

What might be the benefit of whispering for mothers and their calves?

Researchers working on these studies hypothesize that whispering might be a predatory avoidance behaviour to protect calves.

Many animals use avoidance behaviours in order to protect their young against predators. For example, if a fox approaches, the female killdeer feigns a broken wing and calls repeatedly as she moves as far away as possible from her chicks. This behaviour helps keep the predator away from the young, which are still unable to fly. The vole’s sharp sense of smell allows it to detect the presence of predators and thus avoid mating and rearing its young in a hostile territory.

In baleen whales, although calves are usually already large at birth (about 2 m for the smallest species), their inexperience, slow speed in the water and their size compared to adult killer whales (6-9 metres) and some large sharks can make them ideal prey. Whales mainly use sound to communicate. Potential predators of baleen whales can detect them by hearing the sounds they produce. Whispering is therefore likely a perfectly suited behaviour to the way their predators locate them and which would still allow them to continue to communicate.

How did researchers discover these whispers?

Studies on this kind of behaviour do not necessarily use the same protocols, but are based on the same process: a comparison of sound production between nursing females (and sometimes their calves, if possible) and non-nursing individuals.

With regard to the most recent North Atlantic right whale survey, the protocol consist of placing a sound-recording tag on different individuals, including lactating females and non-lactating individuals. The tags are retrieved and the recordings are studied.

This study reports that the rate of low-amplitude sounds produced by lactating females is much greater than those produced by non-lactating individuals. The humpback study reports a significant amount of low-amplitude sound production between mothers and their calves. The study on southern right whales also indicates that lactating females produce few sounds, and when they do, they are mostly of low amplitude. 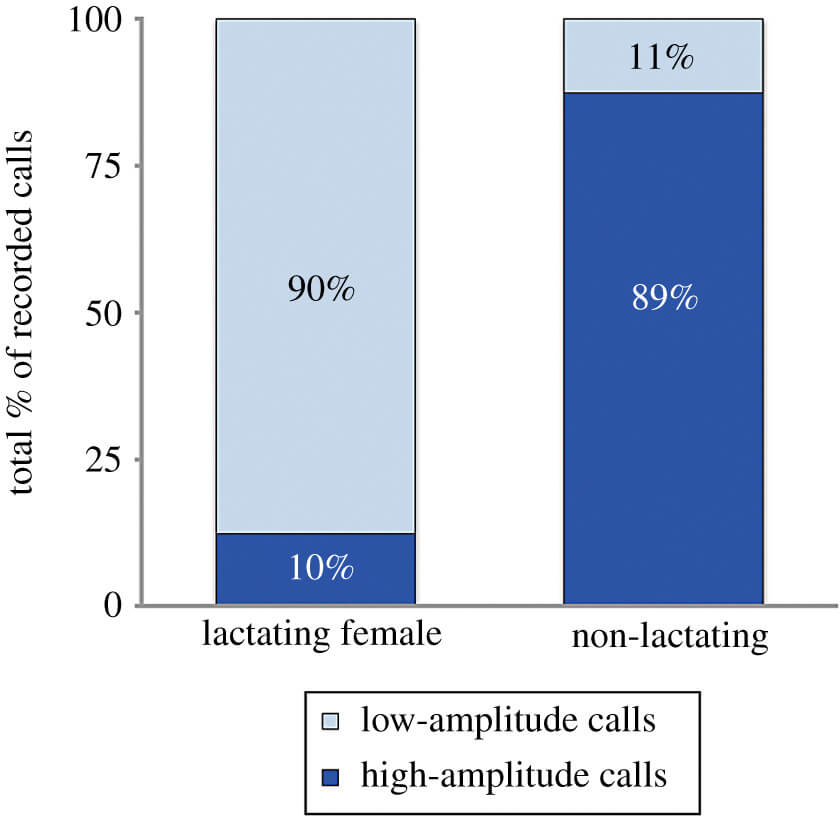