Which cetacean is most at risk of extinction? 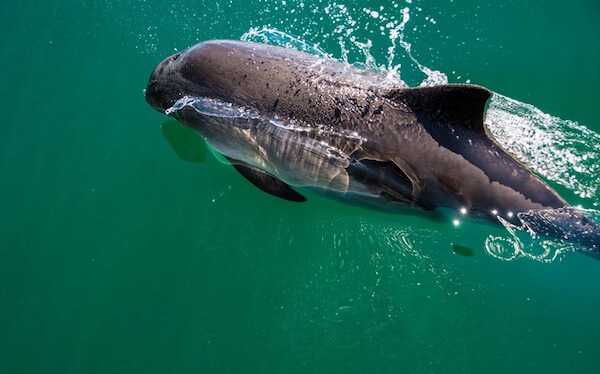 According to the Red List of the International Union for Conservation of Nature (IUCN), it would be the vaquita. This porpoise lives exclusively in the northern parts of the Gulf of California, west of Mexico. At the present time, there are fewer than 40 individuals, all of which are extremely at risk from incidental catches in fishing nets. Censuses indicate that about 30 individuals are found dead each year entangled in fishing gear. At this rate, experts fear that this porpoise will be extinct by as early as 2022. An emergency plan, spearheaded by the Mexican government and supported by a consortium of international experts, has just been launched in a last ditch effort to save this small cetacean. Planned actions include relocating vaquitas to sanctuaries or large floating enclosures to provide them with a chance to survive and breed, a total ban of gillnets, stepping up surveillance against illegal fishing, and developing alternatives in order to continue fishing, the only socio-economic motor of the region. According to the Center for Biological Diversity, the Turtle Island Restoration Network and the Natural Resources Defense Council, every year more than 650,000 whales, dolphins and other marine mammals are caught accidentally in commercial fishing gear, and the vaquita is the most glaring example.

Closer to home, the coastal habits of the harbour porpoise and local fishing techniques have not always been very compatible. In the early 1990s, thousands of incidental catches in fishing nets prompted fears for the species’ survival. Since then, the number of mortalities has decreased with the introduction of new fishing control measures, though the Committee on the Status of Endangered Wildlife in Canada (COSEWIC) nevertheless considers bycatch to be a potentially limiting factor for this population . Its status has been “Special Concern” since 2003.

Even the great whales are not safe from incidental catches, as evidenced by the North Atlantic right whale. This species was nearly driven to extinction by whaling at the end of the 1800s. Today, the North Atlantic right whale is endangered. A mere 526 were tallied in 2014, and bycatch in fishing gear represents the second most important cause of mortality after ship strikes.

On Science Daily: International effort announced to try to save the world’s most endangered marine mammal

Which cetacean species are extinct?

Are whales endangered? (in French)