Whales on the Move!

After being present in large numbers in the Estuary this summer, the whales now seem to be heading east and undertaking their migration to their wintering grounds. One observer tells us that he saw about 50 individuals off the coast of Franquelin on October 21, mostly humpbacks and a few fin whales. “It was a sight to behold, even if they weren’t very close!”, he exclaims. Only a handful of individuals ventured close to the village, while the majority of the three groups he observed remained far offshore. According to this same person, there were at least thirty humpbacks and one fin whale offshore between Franquelin and Godbout on October 25. They were also accompanied by a pod of unidentified dolphins and nearly a dozen minke whales. “It was truly stunning… spouts were erupting everywhere!” he adds, delighted.

On October 26, another observer reports that he saw four humpback whales including a mother and her calf between Baie-Comeau and Godbout, as well as minke whales and harbour porpoises off the coast of Sept-Îles. On the morning of October 27, large cetaceans were present in Godbout, but were no longer in Franquelin.

Whales and their antics

Farther upstream, cetaceans were still present this week. On October 22, a birder tallied six fin whales and eight humpback whales off the coast of Tadoussac, including a “loony” individual doing circles around a Zodiac. And who was on board that Zodiac? Photographer Renaud Pintiaux, who managed to capture with his camera this frolicking humpback that breached 15-20 times! On October 26, this amateur ketologist, out once again on the water between Tadoussac and Les Escoumins, observed nearly a dozen humpbacks. The same day, a birder reports having seen off Tadoussac six minke whales and two humpbacks, but no fin whales. A minke whale was also plying the waters around Pointe de l’Islet. Also on October 26, three minke whales including a mother and her calf enchanted an observer at L’Anse-de-Roche.

On October 21, a minke whale let out a blast just in front of the CIMM, where two Whales Online editors happened to be enjoying their lunch. “The individual appeared to be young. It emerged very close to the rocks, darted aside to hunt, then swam along the tip of Pointe de l’Islet before disappearing under the water,” say the staff members.

Out in the Gaspé, no one seems to have seen any marine wildlife of late. However, in Havre-Aubert (Magdalen Islands), grey seals and minke whales were still present. Near the mouth of the Sainte-Marguerite River in Sept-Îles, a grey seal and a harbour seal also poked their heads above the water. 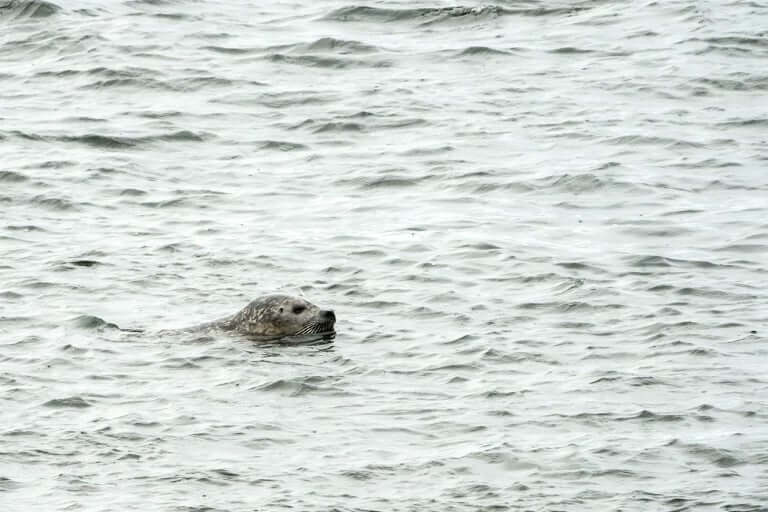 Don’t hesitate to share your most interesting marine mammal observations by writing to us at [email protected].