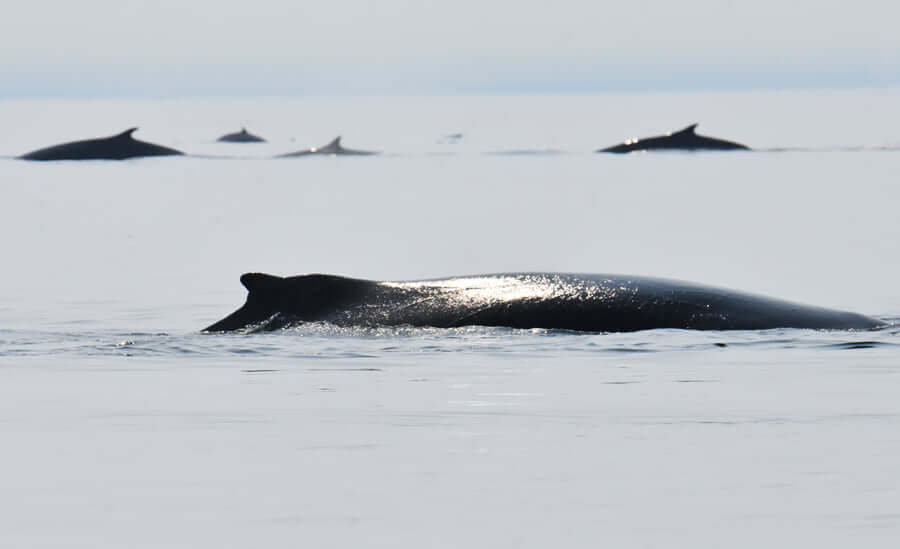 “It’s awesome out there! There are humpbacks, fins, minkes… It’s non-stop!” exclaims photographer Renaud Pintiaux. At high tide in the Saguenay-St. Lawrence Marine Park, whales congregate around shoals of fish in rather dense groups. In the relatively small head of the St. Lawrence Estuary, GREMM researchers were able to identify this week about ten different humpbacks and about thirteen fin whales… but there were probably more.

“It’s whales galore!” exclaims one naturalist who works on the cruise ships. Cruise passengers have been regularly entertained by breaches, pectoral and tail slapping, as well as other acrobatics.

Harbour porpoises and seals sometimes make an appearance at these whale festivities. “During one trip, we came across four huge grey seals opposite the docks in Les Bergeronnes. I’d never seen any so big. They were very quiet, resting their heads above the water,” says the photographer. 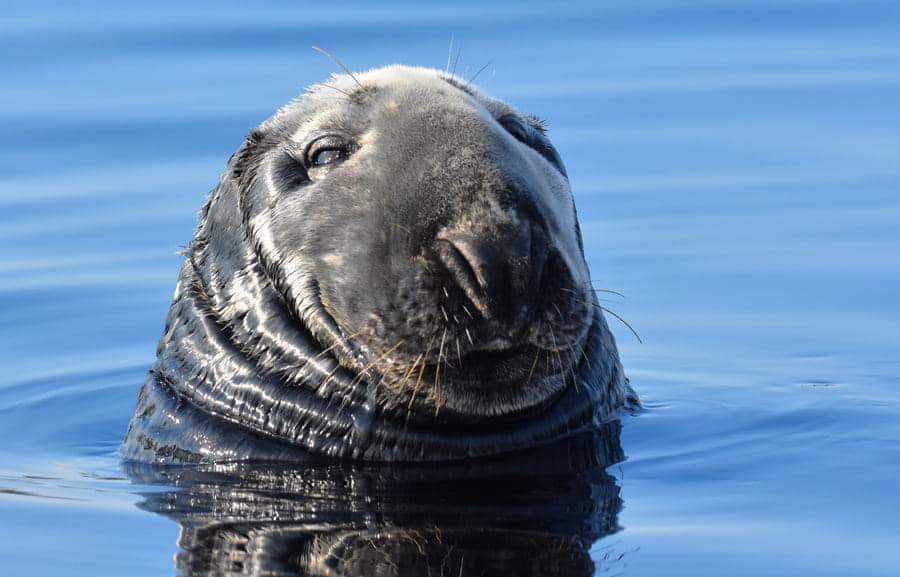 The Marine Park is not the only place teeming with life. Observers in Pointe-des-Monts and Godbout have also been reporting large gatherings of whales offshore. During a family outing, a local resident tallies at least ten different humpbacks, two fin whales and about twenty minke whales clustered a few nautical miles off the coast in what appears to be a school of fish.

“In the Bay of Sept-Îles, locals were in a festive mood tonight!” writes one reader. A gorgeous minke whale was feeding near the edge of the old wharf, while another one was swimming farther out. I watched them for a good hour.  I also observed seals every day this week as well as a few porpoises.” 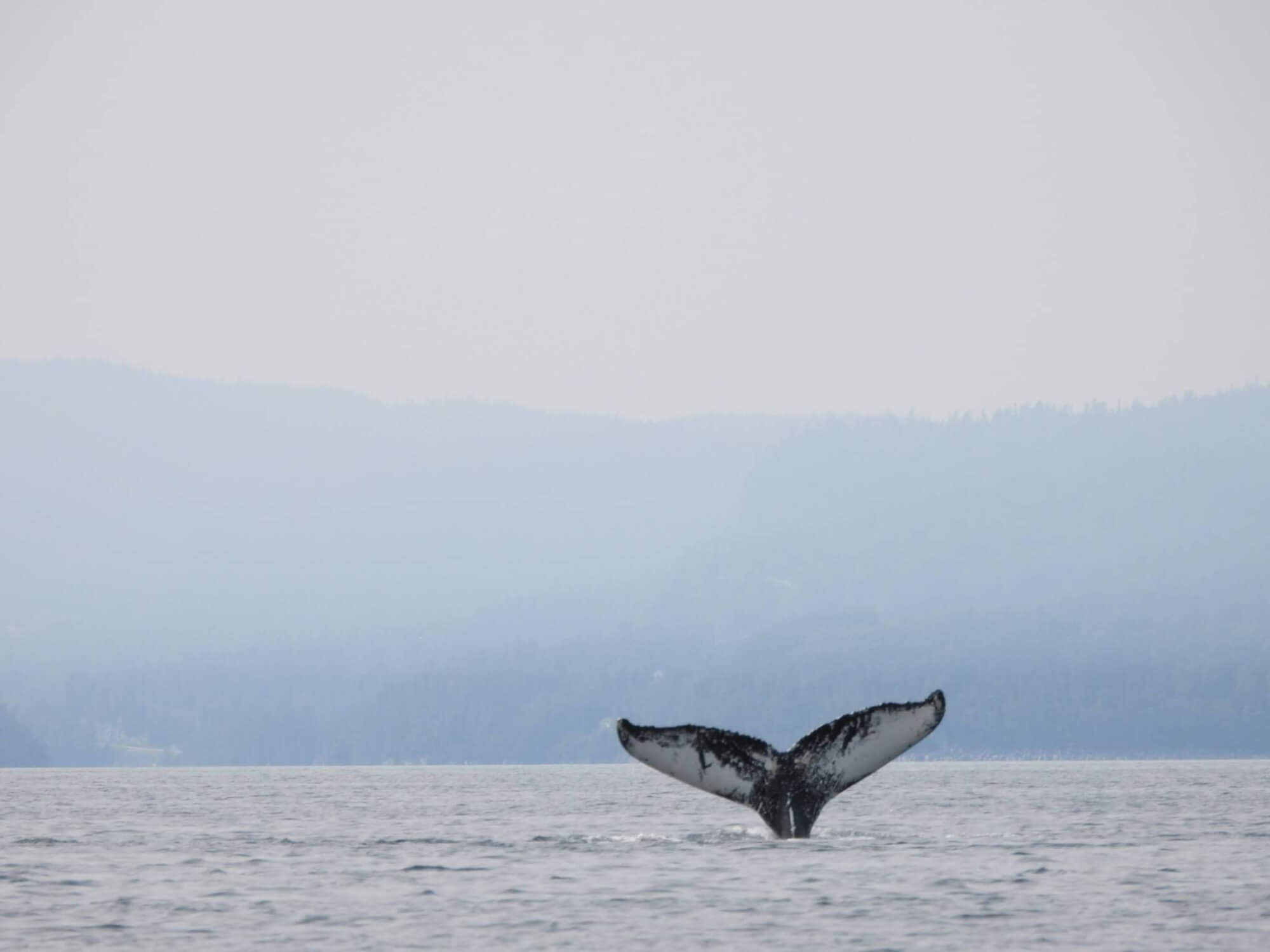 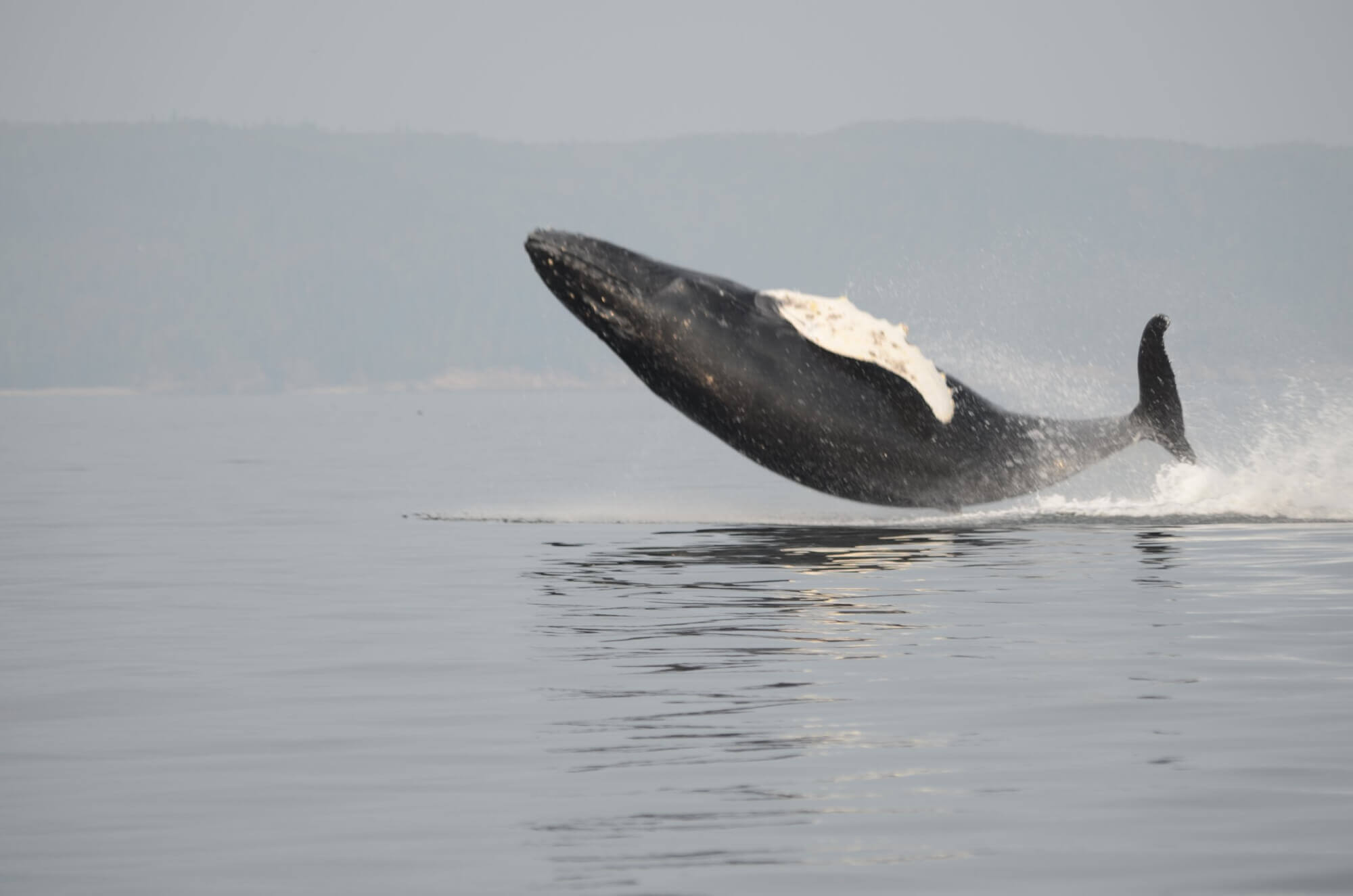 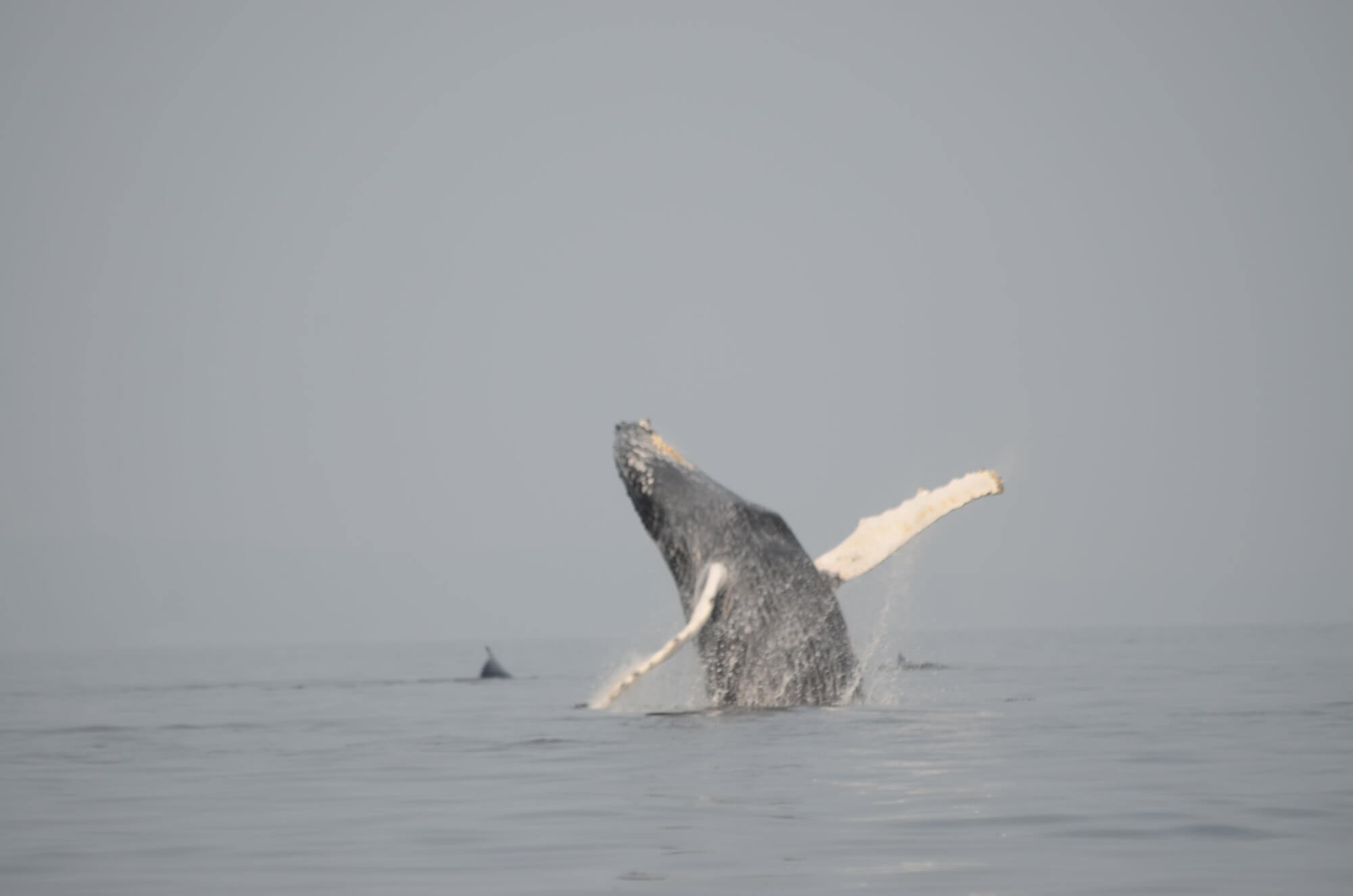 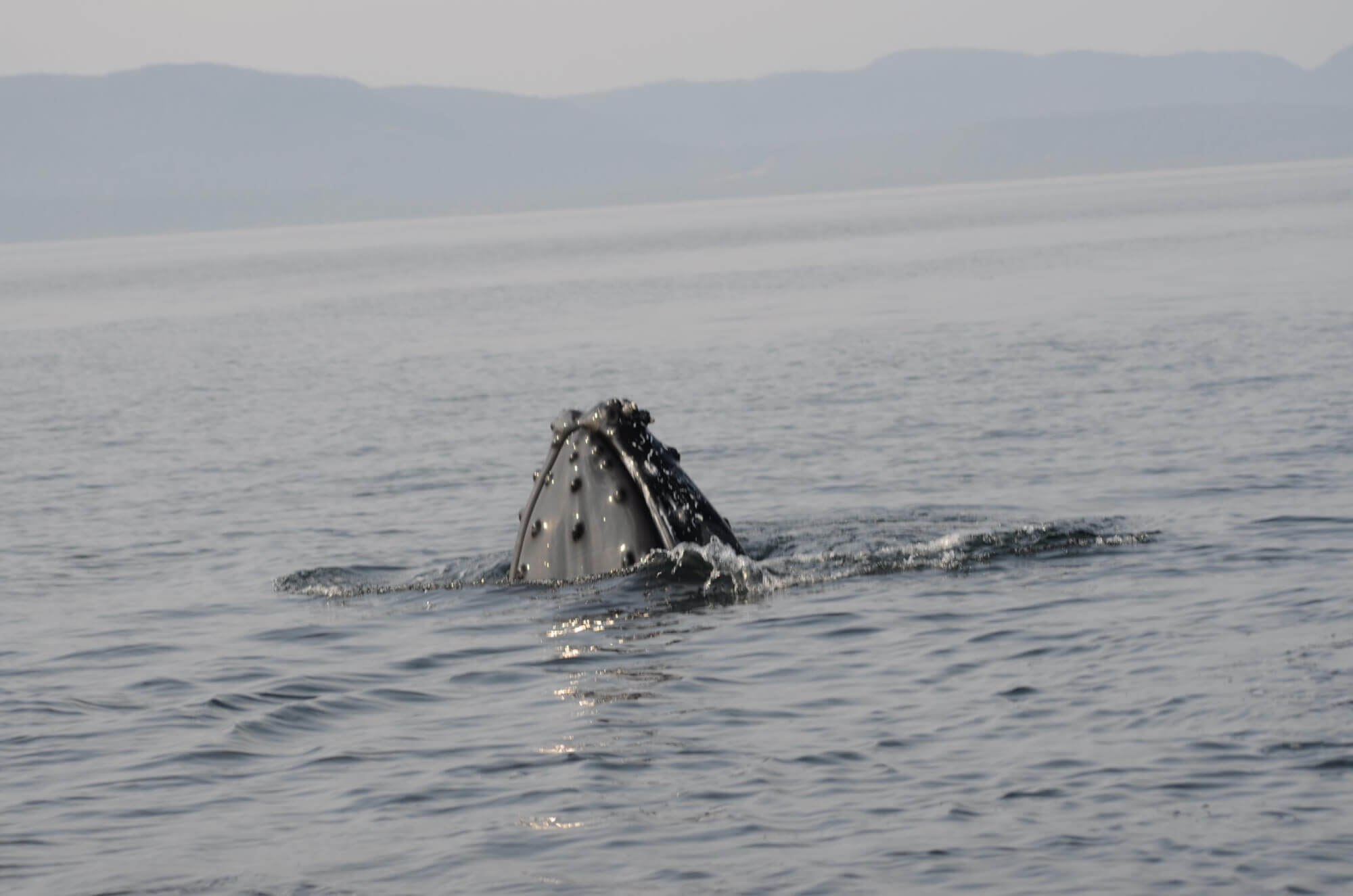 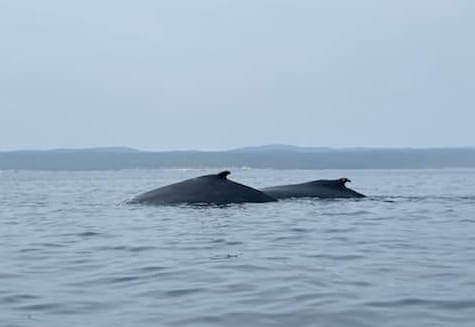 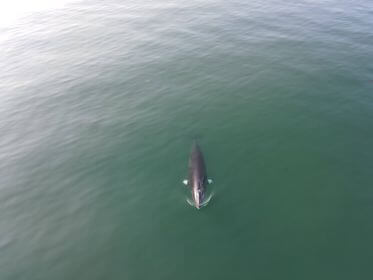 In the Baie-Comeau area, harbour porpoises and minke whales have been in a feeding frenzy. Meanwhile, “Sand lance are present by the tonne near the Baie-Comeau docks,” says one observer, “as well as all along the shoreline of Saint-Pancrace Bay, where minke whales forage to the delight of local residents. Cormorants and northern gannets are also gorging themselves on these schools of sand lance.” On Monday, Atlantic white-sided dolphins are seen leaping off the coast of Franquelin.

Also early in the week, observers reported numerous belugas foraging off Rivière-du-Loup. Fish are obviously abundant here. “I saw seals coming up with striped bass in their mouths,” says one observer. Belugas are present in small numbers in Cacouna, in large numbers off Grande Île, and are being spotted almost daily moving up or down the Saguenay Fjord to or from Baie Sainte-Marguerite with the currents and tides. A reader also informed us of the passage of a herd of pure white belugas off Essipit last Saturday.

Return of blue whales and a white porpoise

They were missed! Blue whales, the largest animals in the world, had been absent for the past several weeks. On Tuesday, two were observed in the Honguedo Strait between the Gaspé Peninsula and Anticosti Island. Two days earlier, another blue whale was also photographed by the Mingan Island Cetacean Study (MICS) west of Anticosti Island. Great news for blue whale aficionados who were eager for these giants to return.

From the Mingan Archipelago, we have also received word of the presence of two humpbacks, two fin whales, a handful of dolphins, grey seals and many porpoises. Surprise: one of these porpoises looks like it might be an albino! Albinism exists in a number of species of cetaceans, but remains a rare and surprising phenomenon to observe in the wild. A regular in this region also reports numerous observations of basking sharks.

Pleasure for the senses

In the Gaspé Peninsula, observers are moved by the colourful antics of Atlantic white-sided dolphins in Gaspé Bay and off the coast of Saint-Yvon. A few whales large and small continue off Cap Gaspé and two humpbacks are seen slapping their pectoral fins on Tuesday from the shores of Saint-Yvon.

Watching a whale is a memorable experience, but hearing one is even more unforgettable. Thursday evening during a paddling trip on the St. Lawrence near Les Escoumins, a kayaker witnesses a breaching minke whale followed by what she describes as a long wail. “It was a remarkable sound, like nothing I had ever heard before”, she describes. This observation is very intriguing, as minke whales are not particular vocal and their sounds are rarely heard out of the water. They produce low-frequency sounds that sometimes resemble grunts, other times a thumping noise.

Belugas are renowned for being particularly vocal. True to form, they couldn’t resist chattering last Saturday, either. Several witnesses report vocalizations and spy hopping behaviour at Pointe-Noire. As it turns out, a fire had broken out that day in the hills bordering Tadoussac Bay and several tankers were called in to extinguish the blaze by drawing water from the Saguenay. Although it is difficult to conclude that the two events are related, one can imagine that the belugas also noted some unusual activity going on.

A GREMM employee had a very different sensory experience when a fin whale surfaced to breathe just a few metres from the cruise boat. It was at this time that she noticed its blowholes “as large as dinner plates” and the infamous but not-so-tantalizing odour of its breath.

Where are the whales this week? Here’s what our collaborators saw!