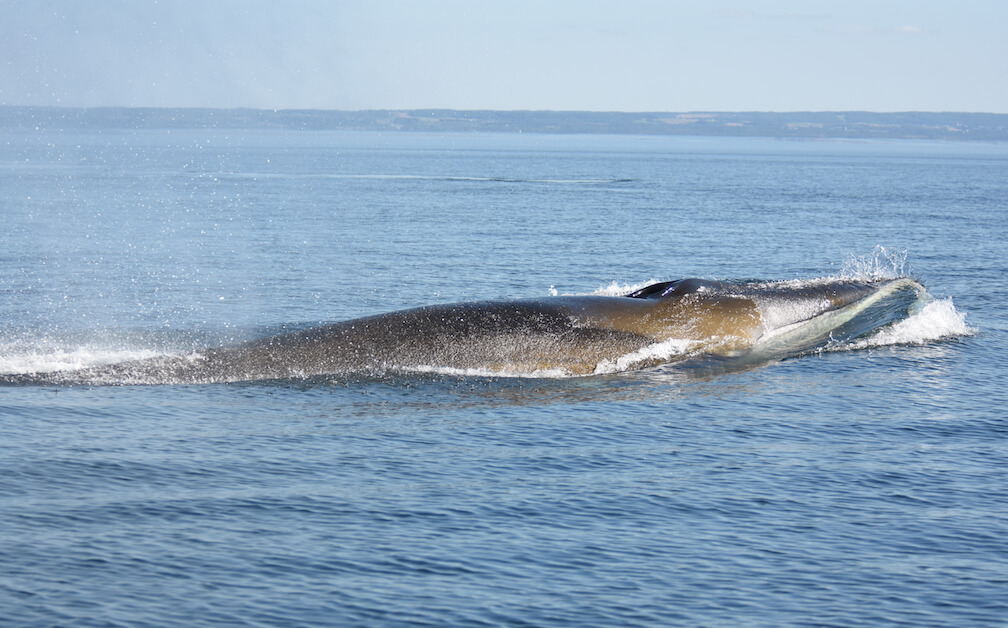 This fin whale was taken in picture on September 12. It is covered with microscopic algae called diatoms. © GREMM

With a hesitation in her step, she walks down the ramp to the boat launch in the Tadoussac marina, where a Zodiac is waiting for her. “It’s steep, be careful,” the captain warns her. Holding the arm of a boat attendant, she finds her place by following the curves of the Zodiac. The engine hums, the wind lashes at her face, but fails to erase her broad smile. The roar of the engine comes to a stop, the boat slows down, a breeze whistles in her ears. “Pffff!” Like a cannon shot in the distance. Around her, the other passengers can hardly contain their excitement. “Its long and smooth back is completely black!” She imagines the texture of this back, she hears the blow and the water running off the long surface of the fin whale that has surfaced to breathe. She can feel the excitement of the moment. Throughout her cruise on September 7, she hears the spouts of three fin whales and several minke whales. Yes, even blind, observing whales is an exciting experience.

During the night of September 8 to 9, campers at Mer et Monde and Paradis Marin in Les Bergeronnes are awoken about half past midnight by a powerful breath. “It’s frustrating not being able to see them!”, whispers one camper who hurried down to the rocks in his pyjamas to try and see where this long, deep breath was coming from. What did he hear that night? It’s hard to know, as in calm weather, even the breathing of porpoises and belugas is audible.

On September 10, a park warden arrives on Bonaventure Island to observe the noisy gannet colony. Offshore, he observes three fin whales swimming 1.5 nautical miles offshore, and, a bit farther south, two spouts of humpbacks on the move. “They’re swimming side by side, and one is much smaller than the other. Could it be a mother-calf duo?” he wonders. In Gaspé Bay, on September 11, it was a mother-calf pair of fin whales that was observed.

That same day, light conditions were poor for photo-identifying fin whales off the Mingan Archipelago. Nevertheless, the team from the Mingan Island Cetacean Study manages to photograph two blue whales, two humpbacks and a few fin whales. Photo analysis is underway to identify which individuals were seen.

On September 12, south of the Brochu River between Port-Cartier and Sept-Îles, one observer spots seven large blows from shore, though too far away to hear this time. How are these tall, cloud-like breaths formed? The hot air (37°C) contained in the lungs condenses upon contact with the colder outside air. In addition to the difference in temperature, since the air exhaled is compressed, the difference in pressure between the lungs and the ambient air also causes this condensation or vapour. In this mass of expelled air are also water and oil droplets from the upper respiratory tracts or from the top of the blowhole, which makes for a not-so-pleasant odour!