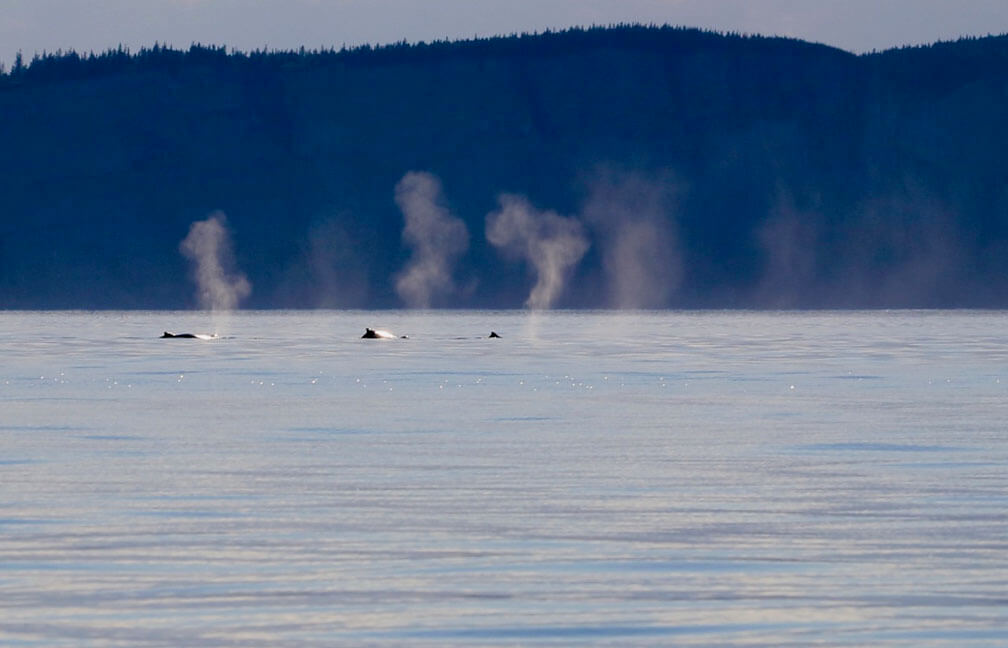 When you hear whales breathing, it is a symphony. © René Roy

Late in the day on November 9, a symphony of spouts resonates off the coast of Cap-aux-Os in the Gaspé Peninsula. “We enjoyed the show for at least 30 minutes,” exclaims one local resident. In the low light, it was impossible to make out the animals, let alone attempt to identify the species or estimate the number of individuals. Enjoying the unexpected heat, the resident is mesmerized by the blowing whales swimming not far from the Gaspé Bay shoreline. “It was absolutely stunning… Wow!”

Earlier that day, a humpback breached right in front of her house while others foraged in the bay. Was it their blows that we heard shattering the evening silence? Perhaps. On the other side of the peninsula, near Cap-des-Rosiers, a resident admires minke whales and harbour porpoises by the dozens. “The water is so calm this morning, we can spot them up to three nautical miles offshore!” That afternoon, three fin whales are seen surface feeding about 1.5 nautical miles off the coast.

Still farther offshore, in the Strait of Honguedo separating the Gaspé and Anticosti Island, both blue whales and fin whales are identified during aerial surveys on November 8. On the other side of Anticosti, in Jacques Cartier Strait, surveyors spot two right whales, one humpback and three fin whales from the plane. It is quite possible that more animals are in the area but that they were diving at the time of the overflight. Diving whales make aerial surveys all the more complicated. This is why we must take into account the average dive time of the species in question, sectors not covered by the plane, etc., if we want to get the most accurate picture possible of the situation. 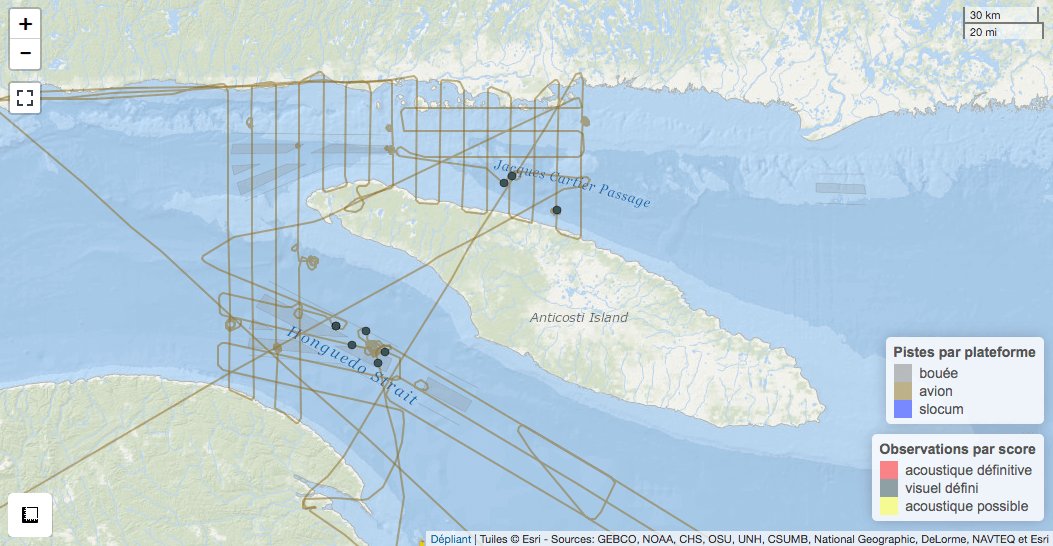 Brown lines represent the aerial survey and the black spots are a least one whale. © Whale Map

Far off the coast of Sept-Îles, two blue whales are observed swimming together on November 7. Another blue whale is roaming the sector, but seems to be keeping company with a fin whale. These two species are capable of interbreeding. A recent study has noted that the majority of hybridization cases involve a male fin whale and a female blue whale. Will we see a hybrid calf in the St. Lawrence next summer?

Plying the waters of the Bay of Sept-Îles are minke whales, harbour porpoises and harbour seals. In other words, there’s still a good variety of species left in the Gulf!

In Franquelin and Godbout on November 11, minke whales and porpoises approach the coast. They are easily observable thanks to the smooth sea.

In the Estuary, on the other hand, observations are growing more and more scarce. A few belugas and minke whales have been observed from shore between Tadoussac and Les Escoumins, while a fin whale was reported from the Tadoussac dunes. On November 5, a number of lion’s mane jellyfish (Cyanea capillata) washed up on the beach in Tadoussac. This species lives in the first 20 metres of water below the surface. It is therefore possible that strong winds and large waves pushed them out of the water. The impressive lion’s mane jellyfish can have an umbrella (the upper, jelly-like portion) up to 2 m in diameter, and their tentacles can measure several metres long. The hue of this species changes with age, just like that of belugas.

It all goes to show that life in the St. Lawrence is rich in colours! 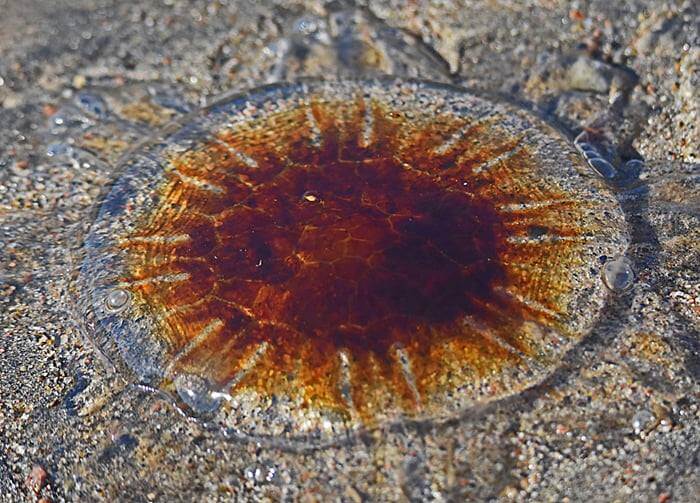 This lion's mane jellyfish washed up on Tadoussac beach. © Renaud Pintiaux
Observation of the Week - 12/11/2020