Video of Beluga Playing with a Gull 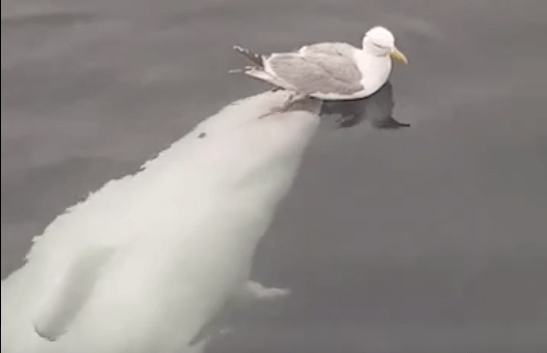 A video of a beluga taking a gull in its mouth, following it around and even trying to taunt it with a fish is going viral. According to the video’s owner, this is the beluga Hvladimir. This individual was observed by Norwegian fishermen in April wearing a harness marked “Equipment of St. Petersburg” and may have been trained by the Russian army. Since then, this beluga has been hanging around Norwegian ports. A few weeks later, a beluga was also filmed retrieving a cell phone falling in the waterand giving it back to its owner. It is possible that it is the same beluga in all three videos.

Robert Michaud, Scientific Director of the Group for Research and Education on Marine Mammals, has only ever observed one other interaction between a beluga and a bird in the past 35 years. “It’s an interesting behaviour. We once saw a beluga out of its usual area in Chevery, in Quebec’s Lower North Shore region, interacting with a young Arctic tern and nibbling at its legs, much like in this video. Is this behaviour a way to keep from getting bored?” he wonders. In both cases, the belugas were isolated from their community and also sought interactions with humans and their watercraft.

A search on YouTube also shows this kind of behaviour in belugas living in aquariums. “The behaviours exhibited by the whale are very similar to what we see with belugas in an oceanarium,” confirms Steve Aibel, Senior Director of Marine Mammals at Chicago’s Shedd Aquarium. “We see frequent interactions with enrichment objects at the surface of the water in our population of whales at the Shedd Aquarium. In this case, the bird is relatively safe for the beluga, but learning to interact with foreign objects in the ocean could present some danger.”

In Quebec, whenever a beluga is observed outside its usual range, the Quebec Marine Mammal Emergency Response Network, in partnership with local fishery officers, strives to educate recreational boaters and fishermen operating in the vicinity. A solitary beluga is more likely to find a group of its own species and survive if it is not stimulated or fed by humans.