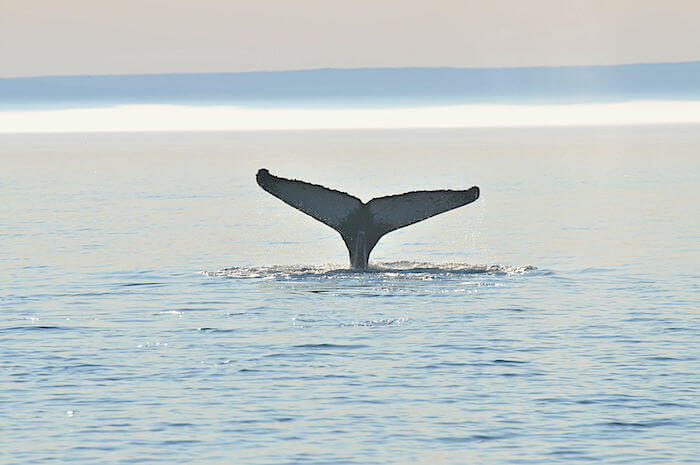 It seems that late August is bringing its fair share of unique moments to observers on the St. Lawrence.

In Pointe-des-Monts, a local resident could barely contain his excitement! On August 20, he tallied some thirty humpback whales, fin whales and countless minke whales amongst the gray seals. The humpbacks were breaching and the activity was relentless. “I simply can’t believe my eyes!” he exclaimed.

On August 17 in the Saguenay-St. Lawrence Marine Park, wrote the following: “It was a dream day out on the River. In 20 years on the water, I think this was the most memorable trip offshore of my life!” The humpbacks of the sector, Gaspar and Fleuret’s calf, nicknamed Picotine by captains, were surface feeding with their mouths stretched wide. Fin whales did the same, spreading their impressive jaws, darting sideways to engulf their prey. Nearby, twenty or so minke whales swam and breached, sometimes in duos, trios, and even quartets! To cap off this unique moment, a humpback whale glided under the boat, revealing its immense body and fins visible through the clear water, while in the distance, another humpback thrust itself out of the sea.

The sector around Les Escoumins was visited by four blue whales, including Jaw Breaker, who is known for showing its tail when it dives. Also, a recreational boater sent in photos to the Whales Online team of a cetacean that he had encountered off Île aux Basques on August 17: a black-speckled body swimming amongst a group of belugas. Photo analysis confirmed that it was the narwhal that had been seen earlier in July and August, off Trois-Pistoles and Les Escoumins, respectively. An extraordinarily rare species for the area, being thousands of kilometres from its natural habit! Lastly, everyone agrees that the presence of harbour porpoises in the Estuary is impressive; visible from land and sea, these small cetaceans are being observed by the hundreds.

In Franquelin in the Côte-Nord region, our dedicated observer was eager to report her recent observations. “Never seen anything like it!” in her words.  Earlier this week, minke whales were letting loose on the water surface amongst northern gannets and gray seals, suggesting that the buffet was a copious one. Then, toward the middle of the week, this same observer spotted seven humpback whales from her home. “We didn’t know where to look anymore, there were tails everywhere!” she exclaims.

Lastly, in the Gaspé, the tourist season is still going strong, with unprecedented sightings there, too. Cetaceans have been plentiful, especially on the morning of August 24, when thousands of white-sided dolphins were visible from Cap-des-Rosiers, in addition to large candle-shaped spouts. Is this the long-awaited arrival of blue whales?