This minke whale carcass was found washed up on the shores of Île Verte. © Charlène Dupasquier

On Sunday, July 3, a minke whale carcass was found on Île Vertein Quebec’s Bas-Saint-Laurent region. This is practically the backyard of Pierre-Henry Fontaine, founder of the Skeleton Museum. This proved to be a tremendous opportunity for collaboration between the retired biology professor and the Quebec Marine Mammal Emergency Response Network (QMMERN). Might the marine mammal enthusiast be able to add this skeleton to his collection?

When QMMERN team members received the report of a minke whale carcass stranded on Île Verte,they were not surprised to learn that the call had been placed by none other than Pierre-Henry Fontaine. Indeed, the latter is a seasoned expert on cetaceans. He has dissected and prepared many a skeleton, whether for the Skeleton Museum, for his book Whales and Seals:Biology and Ecology, or out of personal curiosity.

It was not Cédric Gascon’s first intervention either, as this is his second summer with the QMMERN mobile team. There was something a little special about it, however. First of all, transportation to and from Île Verte had to be organized. To get there, Cédric had to take the ferry, but he had to cross the St. Lawrence as afoot passenger, asthere was not enough room on board for his truck! In addition to that, he was going to have the opportunity to work with Pierre-Henry Fontaine,

who came to pick up Cédric when the ferry arrived. Indeed, the retiree is one of twenty inhabitants that reside on Île Verte year-round. The day before, he had moved the carcass to his property to prevent the tide from washing it away. 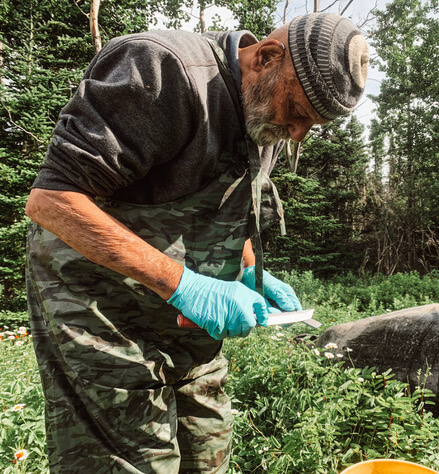 With the help of a Network volunteer, the team was able to begin sampling the animal. The team measured its length and circumference before collecting skin, fat and muscle samples, as well as baleen. “It was impressive to see Pierre-Henry at work,” comments Cédric. “He was really meticulous in his movements, and what would have normally taken us 30 minutes, he did in no time at all.” The samples will be used to learn more about the individual in question and they will be kept in a freezer until they aretransportedfor analysis. They will provide essential information for a better understanding of the causes of the animal’s mortality and the species in general. 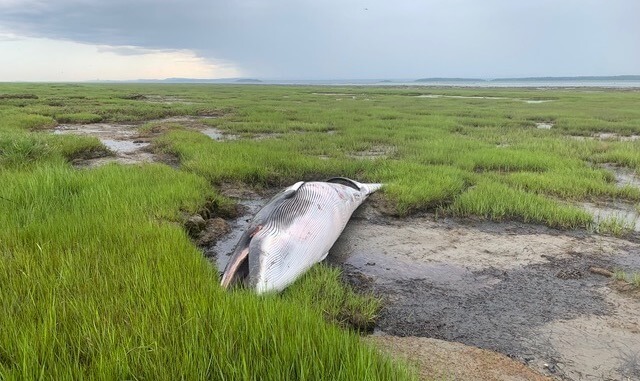 A number of data were collected during the intervention. © Charlène Dupasquier

A sense of déjà vu

The presence of the cetacean and skeleton enthusiast made it possible to take the analysis to another level. “Upon examining its stomach, we discovered that it was completely empty,” comments Pierre-Henry Fontaine. “There were also no traces of injuries or visible markings. The carcass was also very fresh.”The overall circumstances of the incident reminded him of an old story: “About thirty years ago, there was another minke whale carcass that I remember hearing about. People observed the animal venture into and become stranded in the tidal flats, where the water is only 2 to 3 metres deep. I think the same thing may have happened here, though that’s just a guess.”

At the end of the day, the experience turned out to be very rewarding: It was fun, because while he was working, he often stopped to explain certain things to us,” says Cédric. It was obvious that he had experience as a professor.”

Lastly,the minke whale was too young for Pierre-Henry to recover its skeleton. “At this age, the pieces of the skeleton are not yet fully fused together,” he explains. “In any case, I got to keep the skull. The ball’s in my court now. Perhaps I can add it to my collection, if it withstands the treatments.”