An ancient whale with neither teeth or baleen 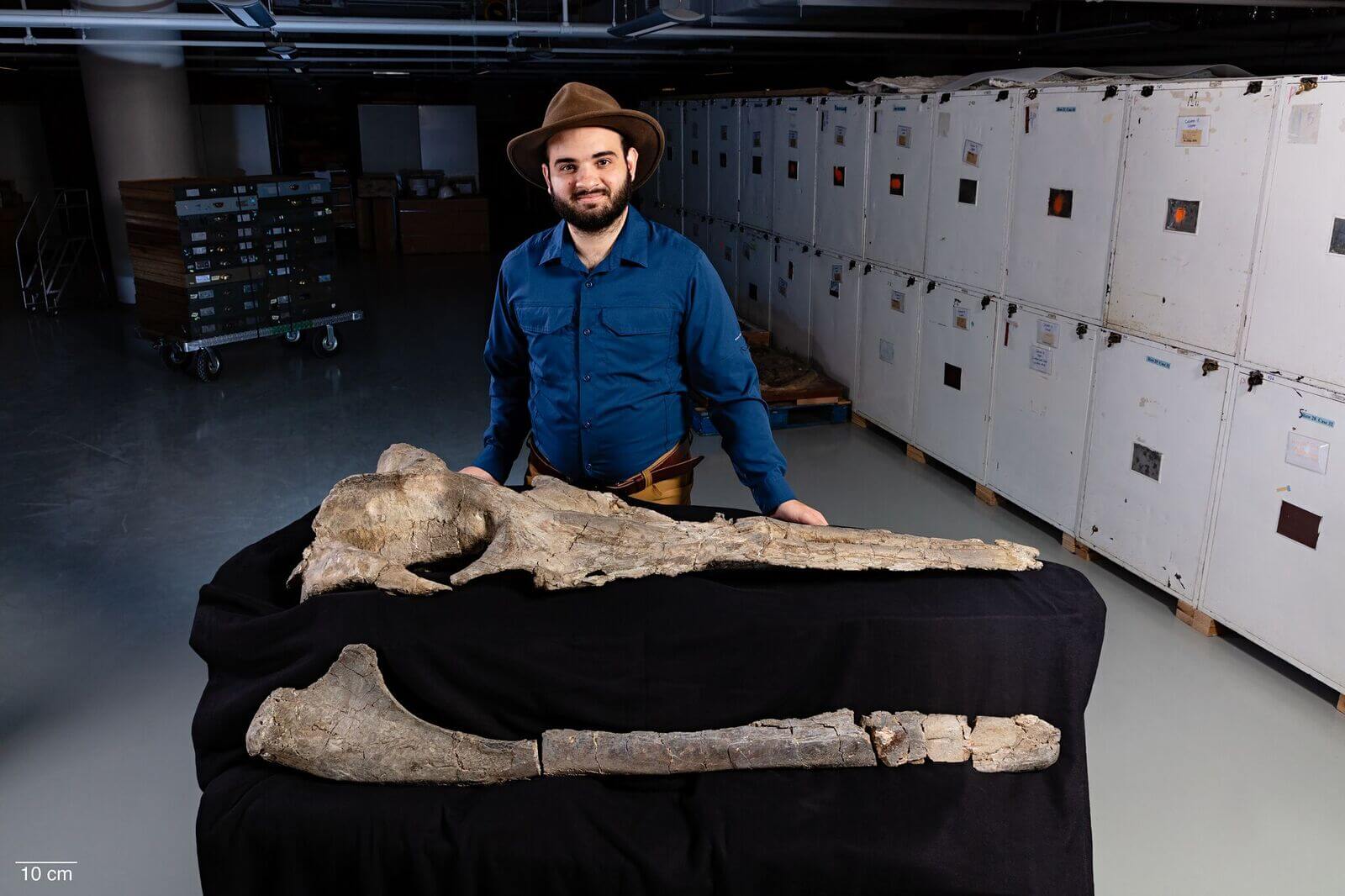 The fossil of a now-extinct species of whale has no trace of teeth or baleen. Such was the conclusion of researcher Carlos Mauricio Peredo, who studied the fossil using new technologies. © Smithsonian Museum

Museum collections are full of fossils that haven’t been carefully examined in years. However, by taking a closer look at a 33-million-year-old whale fossil from the Smithsonian’s National Museum of Natural History in the United States, a team of paleobiologists recently discovered a crucial clue as to where whale baleen comes from.

Baleen are unique to whales. They hang from the top of their jaws and act like a comb with numerous, tightly-spaced teeth. When feeding, baleen whales engulf huge quantities of water that are evacuated through these combs, trapping small fish and crustaceans in their jaws.

An Ancestor With an Empty Mouth

Whales are divided into two broad groups: toothed whales and baleen whales. To explain the appearance of baleen, it was long believed that a portion of toothed whales gradually developed baleen and lost their teeth. However, this nearly-forgotten fossil in the museum’s archives, that of the ancient whale species Maiabalena nestittae, has neither teeth nor baleen. Back to the drawing board we go!

How is it that paleontologists overlooked this detail when cataloguing the fossil years ago? It is because baleen do not stand up well to the test of time. Because they are composed of keratin —the same material found in our hair and nails— they do not fossilize easily. It is therefore not enough to observe the jaw of a whale fossil to determine whether or not it had baleen.

The Smithsonian team, led by Carlos Mauricio Peredo, made a high-resolution scan of the fossil. This way, they could see what was going on inside the jaw bone. In contemporary whales, the jaw is punctuated with numerous microscopic grooves lined with a network of blood vessels that irrigate the baleen or teeth, whereas Maiabalena does not have the slightest trace of a perforation!

“For the first time, we can now pin down the origin of filter-feeding, which is one of the major innovations in whale history,” explains Carlos Mauricio Peredo in a press release.

It remains to be seen how a toothless, baleen-less whale didn’t starve to death! The jaw morphology of Maiabalena suggests a powerful, muscular mouth that could be positioned like a straw to suck up its prey, generally soft organisms such as squid. This “vacuuming” technique is also observed today in some toothed whales, including the narwhal.

But why did Maiabalena lack teeth? According to scientists, the hypothesis to explain the appearance of a toothless whale is climate. Maiabalena lived at a time when the environment was changing very quickly: Antarctica was breaking away from South America, which greatly disrupted the ocean currents.

These rapid changes seem to have had a great influence on whales. Indeed, fossils dating from this era are all a bit special: some have jagged teeth, others cone-shaped teeth and some have no teeth at all! This diversity suggests that whales were testing the best feeding strategies and that it was ultimately the teeth and baleen we know today that prevailed.