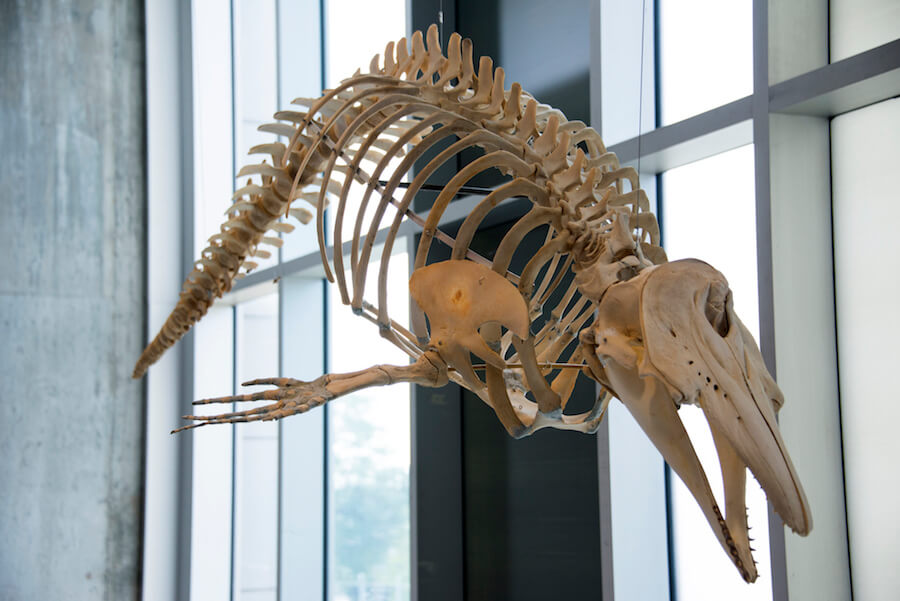 Since late August 2016, there has been a new permanent resident in the Nature Wing of the Collège Lionel-Groulx: a beluga skeleton. According to students in the Natural Sciences program, this specimen will be “a striking tool for raising the environmental and social awareness of other students.”

It was the students’ participation in a marine ecology course – organized for the last 23 years by the College – that drove them to undertake this project. This course helped them to understand the impact of their day-to-day actions on the health of the St. Lawrence. Students in the program wish to thank the College Foundation, which supported this project financially. “Through the symbol that [the beluga] represents, it reminds us of the intimate connection that we have with the St. Lawrence River and the importance of knowledge to help guide our actions,” points out biology teacher Philippe Daigle.

How does a marine mammal get rebuilt?

Very few people have the skills to flense, isolate, treat and assemble the skeleton of a marine mammal. Preparation of the beluga skeleton for Collège Lionel-Groulx spanned more than a year and was performed by Pierre-Henry Fontaine, retired biology teacher and founder of the Musée du squelette on Île Verte. Preparing larger marine mammals can take decades.

Large marine mammals can weigh tens of tonnes, which presents major challenges for recovering and transporting the bones. Smaller animals, on the other hand, can be cut up quickly in easy-to-transport parts.

But the real issue is degreasing the bones. Marine mammal skeletons contain larges amounts of fat and the bones are very fragile, despite their size. As explained by Pierre-Henry Fountain, “a whale is hardly able to use its fat cover (blubber) as a food reserve. This blubber is its thermal insulation – its “diving suit” – without which it would rapidly lose body heat given that it lives in a highly heat-conductive environment. It will therefore be in its skeleton that it will accumulate reserves that it will draw from in the event that food becomes scarce. The bones of cetaceans are composed mainly of spongy bone, where fat reserves will accumulate, wrapped a relatively thin layer of compact bone.”

So how can the fat be removed without damaging the bones? Certain chemicals are effective at dissolving fat, but they are often toxic and expensive. Another option is to let nature, insects and bacteria do their work, by placing the bones in a water tank for several months or even years. They can subsequently be cleaned with hot water or degreasers, then bleached with hydrogen peroxide or simply in the sun.

Assembly of the skeleton then begins: a genuine three-dimensional, several metre long puzzle!

The Marine Mammal Interpretation Centre (CIMM) in Tadoussac is presenting an exhibit where one can admire thirteen complete skeletons, including a 13.5 m long sperm whale, minke whales, belugas, dolphins, porpoises and a very rare Sowerby’s beaked whale. There are also two other specimens in the works: a fin whale and a North Atlantic right whale.

At the Musée du squelette on Île Verte, there are more than 300 skeletons, partial skeletons and skulls. A unique place to discover osteology and how the skeleton has evolved through various adaptations.

You can also admire a number of marine mammal skeletons at the Station Exploratoire du Saint-Laurent in Rivière-du-Loup and at the Aquarium du Québec in Québec City, as well as a sperm whale skeleton at the Musée de la mer in Havre-Aubert in the Magdalen Islands.

To learn more:
On Whales Online:
Skeleton
Building a Whale (in French)

United Nations Kicks off Decade of the Oceans

When the United Nations launches a theme, it’s not merely symbolic. From 2021 to 2030, the theme will be the…

When researchers placed a camera on the back of a humpback whale, they probably weren’t expecting an hour-long video during…

Itching to set sail in search of marine mammals? Virtual experiences are available thanks to the following list of podcasts…