Calves spend their time learning to swim, hunt and move with agility by imitating their mother and other adults. Within a few weeks, many calves of the various species present in the St. Lawrence will be weaned. But for now, they still have a lot to learn before they become self-sufficient.

Alongside its mother, Gaspar, the baby looks tiny. Its slightly paler skin contrasts with its mother’s dark black skin. The two humpbacks swim side by side. When Gaspar dives, she lifts her fluke, but her little one doesn’t do so every time. Its movements seem clumsy in the eyes of the research assistant from the Group for Research and Education on Marine Mammals (GREMM) who, filled with emotion, captures a shot of them.

The following day, the research assistant saw the calf trying to imitate its mother leaping out of the water. Observers in the Saguenay–Saint-Laurent Marine Park also had the chance to witness Gaspar and her calf’s learning sessions, which are essential to its survival.

An adult female humpback whale measures between 15 and 16 metres, while at birth, a calf is only 6 metres long, which is about the size of a minke whale. © GREMM 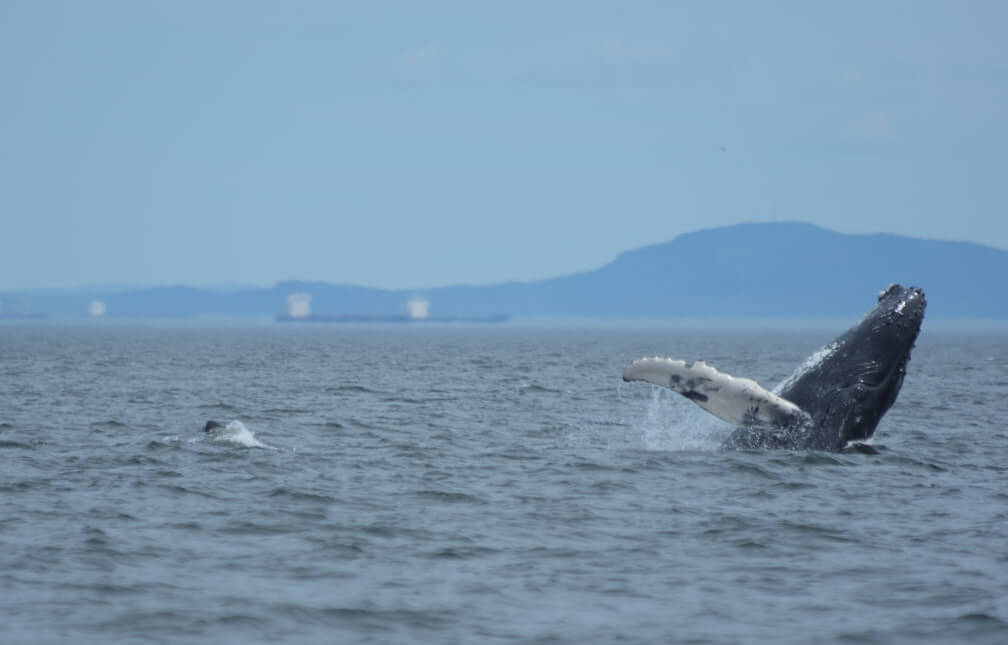 Gaspar’s calf attempts a leap. On the left, you can see the top of the dorsal fin of Gaspar. © GREMM

Humpback mothers and their calves have been spotted throughout the St. Lawrence this week, in Minganie, Port-Cartier, Gaspésie and Haute-Côte-Nord. Humpback calves nurse exclusively for approximately six months and stay with their mother another six months, during which time they alternate between nursing and independent feeding. During their second summer of life, calves usually return to the feeding ground where the mother had taken them.

Collaborator Renaud Pintiaux called us after his day of observation off the coast of Tadoussac on July 20. “I saw Zipper, the female fin whale, all day but without her calf. Is that normal?” Robert Michaud, scientific director of the GREMM, was reassuring. “Fin whale calves are weaned during the summer, after six to seven months of nursing. As summer progresses, separations become longer and more frequent, until the calf is self-sufficient.” Two other fin whale mothers were seen with their calves near Sept-Îles.

Somewhere between Godbout and Pointe-des-Monts, a fisherman at sea observed several porpoises, including a mother with her calf. The harbour porpoise mother will nurse her baby for eight to twelve months. Female harbour porpoises are one of the few cetaceans that can give birth every year, which means they are both pregnant and lactating for most of their adult life… a huge physiological investment!

For other observations, search the map to find out which species were seen.