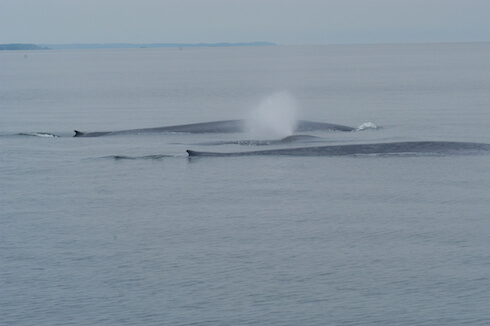 “Three big blues!” exclaims an observer. He observes the three majestic animals Sunday morning 3 or 4 nautical miles south of the North Shore municipality of Islet-aux-Caribous. The animals seem to be feeding: during their time in the area, they dive multiple times while showing their tails. “This observation is consistent with those of recent years,” he says, referring to the late presence of these migratory animals in our waters.

Blue whales and fin whales are frequently seen in the St. Lawrence this time of the year, while humpbacks are less common. Even if these three species are migratory – meaning they will leave the St. Lawrence to return to their winter grounds – not all individuals leave at the same time.

Another blue whale is also spotted Sunday from the Tadoussac dunes by an observer responsible for censusing migratory birds and birds of prey for the Tadoussac Bird Observatory (French: Observatoire d’oiseaux de Tadoussac). Through his spotting scope, he has the privilege of identifying minke whales every day when visibility permits and a fin whale that is still active in the same area. But on November 15, some splashing about 3 kilometres off shore caught his eye. Fast paced, characteristic dorsal fins, many individuals: it’s a school of dolphins! “Two years ago, I was able to cross paths with an impressive herd of dolphins while on a ferry. It was amazing! There’s really no observation that can compare to that of a group of dolphins,” he claims. Difficult to tally at this distance, but he manages to count about seventy, which suggests that the number of individuals is actually much higher.

Two species of dolphins are known to frequent the St. Lawrence: the white-sided dolphin and the white-beaked dolphin. However, observations of them in the Estuary are rather rare, and even more so in November! Occasionally, other dolphin species have been identified in the Gulf and in the Estuary.

In the Gaspé Peninsula, our observers have a view of the open sea obscured by a phenomenon known as sea smoke. The cold wintery air of the past few days comes into contact with the warmer water (and this is the only time it can be called warm!) of the St. Lawrence, which creates condensation that resembles smoke. Behind this wall of smoke, it’s hard to know what might be hiding!