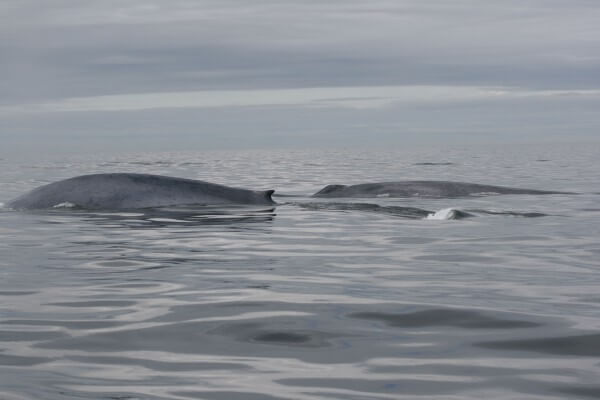 One, two… three spouts appear and remain suspended on the horizon for a few seconds. They’re about four kilometres offshore. Having been tipped off, our Franquelin-based collaborator grabs her binoculars to try and find out what species of whale is off the coast this early morning of March 31.

No doubt about it: she’s looking at three blue whales. Another observer photographs them as well from Route 138. The two witnesses notice the pectoral fin of one of the whales; the animal is turned on its side and is probably gulping down litres of krill “soup”. Blue whales consume between one and four tonnes of food a day.

Though rather solitary, blue whales are sometimes observed in the St. Lawrence gathered in small, short-lasting groups in places where their prey are concentrated. They are also seen in pairs, especially male-female, particularly in late summer and fall. During this period, individuals spend less time eating and more time interacting with one another, which is a precursor to reproduction.

Very few mother-calf pairs have been observed in the St. Lawrence: barely 20 in 35 years of research. The reasons why such occurrences are so rare are still unclear.

After an hour spent off the coast of Franquelin, the three giants move away from the shoreline. Their low-frequency vocalizations (11 to 125 Hz) will allow them to remain in contact even if they drift several hundreds of kilometres apart. These great whales live on an entirely different scale!

Not far from there, the snow crab fishermen are busy. One of them told us that fishing was good the first week in Area 17, but that catches in Les Escoumins were lower than those of Rimouski and Baie-Comeau. He attributes this situation to the strong currents in the days following the great tides of late March, which considerably dishevelled the crab traps lying on the bottom of this stretch of the river.

The snow crab season in Area 16 will begin on April 8. This area comprises the northern portion of the Gulf. Several species of whales and dolphins frequent these waters, including killer whales on occasion.