Thirteen Humpback Whales and Their Little Ones 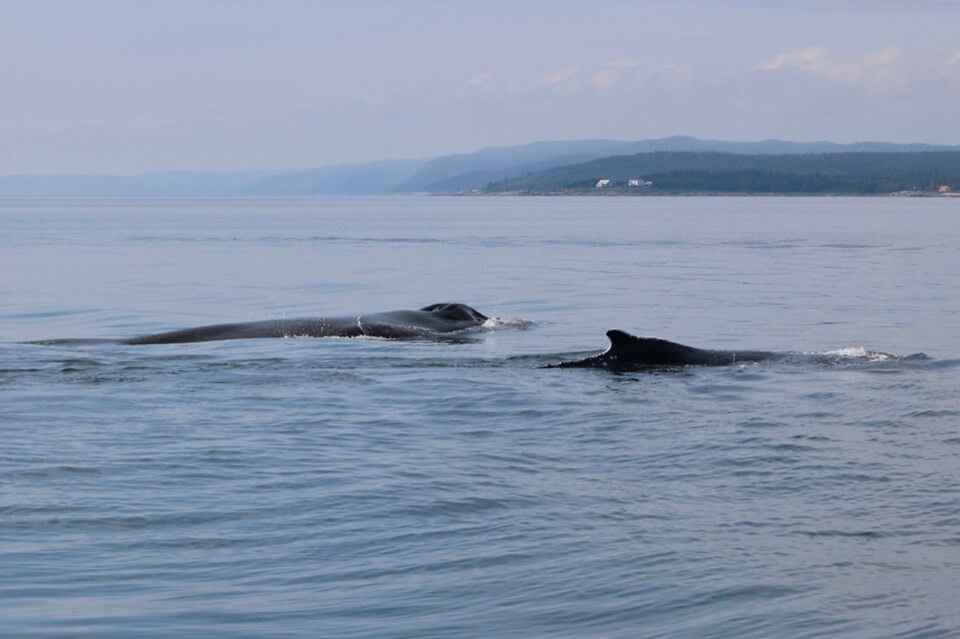 Manta and her calf off Pointe-des-Monts. © René Roy

We often talk about endangered species, but we rarely emphasize how well other species are doing. And humpback whale populations around the world are thriving. From “Threatened” in 1982 to “Not at Risk” in 2003, the humpback whale population of the western North Atlantic is on the rise. This year, thirteen mother-calf pairs have been photographed in the St. Lawrence, from the Gulf to the Estuary. All of which is very encouraging!

The last one to be identified was Manta and her calf, off the coast of Pointe-des-Monts on August 18. The same day, three blue whales, dozens of porpoises, two pods of white-sided dolphins and even a school of Atlantic bluefin tuna are observed. At the surface, we can see sand lance, a choice prey for all these species.

Another well-known humpback is swimming off Sept-Îles on August 19: Tic Tac Toe. A few weeks ago, this female was closer to Baie-Comeau. Every year, Tic Tac Toe visits various feeding sectors of the St. Lawrence. This season, she has already been identified in the Saguenay-St. Lawrence Marine Park.

In fact, many humpbacks have been feeding here in the last few days. GREMM’s large rorqual photo-ID team recognizes eleven, including one that has not been seen in the Estuary since 2003: Le Souffleur! This female has frequented the Gaspé Peninsula and the Mingan Island sector in recent years, but no longer ventured into the Estuary. Observers are therefore delighted to reconnect with this old acquaintance.

The Mingan Island Cetacean Study (MICS) team tallies about 15 fin whales and between 8 and 10 humpbacks off Magpie and Rivière-au-Tonnerre. The whales are probably feeding on krill, based on the reddish colour of the excrement collected on the surface. The faeces will soon be sent to a laboratory in Germany to check for parasites.

On the Gaspé side, humpback whales continue to dazzle residents. Just offshore the village of Pabos, three humpbacks compete to hurl their bodies out of the water. By the time a local resident phones up his neighbour, the three animals have resumed their peaceful swim toward the open sea.

It’s blue whales galore on the north shore of the Gaspé, says MICS blue whale specialist Richard Sears. Over the past few days, he has identified some forty blue whales around Grande-Vallée and Rivière-la-Madeleine. Some individuals are 2 nautical miles from shore, which means they can be seen by locals! Among the blues that were photographed, Richard Sears identifies B093, a regular in the Estuary whose back is unfortunately covered with numerous wounds. Photos will help researchers monitor how they heal.

“It’s the sound of the water and its spout that caught my attention,” says a fisherman at the end of the Baie-des-Sables wharf on August 18. “I saw a few eddies around me, so I kept my eyes peeled. But it was offshore that I saw another, larger whale, probably a fin whale.” He leaves his rod, runs home to grab his binoculars and returns. Three or four whales are feeding in front of the village. Gannets hover over the waves and dive-bomb the water at full tilt. Then, a pod of about a dozen dolphins joins the hunting party. “What an amazing moment! A free performance, courtesy of the majestic St. Lawrence River.”

From Godbout, a fisherman sets sail in calm seas on August 16. About sixty metres from shore, the boat comes to a rest. Silence. Short, dynamic breathing can be heard. No matter in which direction he looks, the fisherman is encircled by groups of three or four porpoises. Then, a slightly stronger but invisible spout sounds: a minke whale. Suddenly, he hears what sounds like a cannon blast. A fin whale is swimming back and forth between Pointe-des-Monts and Godbout. Every now and again, the horse-like head of a grey seal pierces the surface of the calm sea. The cherry on the sundae is a broad, triangular fin slicing through the water surface: a basking shark.

Between Les Escoumins and Les Bergeronnes, a kayaker is paddling along when the fog grows thicker. No longer able to orient himself by sight, he must rely on his ears instead. Flapping wings indicate the presence of sea ducks. All of a sudden, light breathing breaks the silence. White silhouettes emerge around him. He starts paddling to move away from the animals. But near him is a long, twisted tooth: it’s the narwhal! The gathering of these Monodontidae – the family comprising narwhals and belugas – dives and does not reappear. What an enigmatic encounter through the mist!

Here is the observation map! It provides an idea of the observations reported to our team, rather than the actual presence of whales. Have a sighting to share? Don’t hesitate to email me.