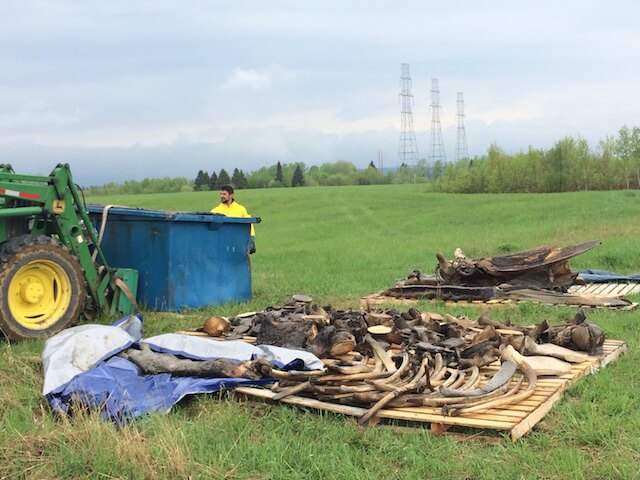 The 5 Étoiles Farm let the CIMM team store the skeleton during the cleaning. © GREMM

On May 3, the carcass of a young humpback whale was found beached in Godbout. Following sampling for research purposes, the whale carcass was recovered by the Marine Mammal Interpretation Centre in Tadoussac (CIMM). After flensing the carcass in record time at the Ragueneau landfill site, the CIMM team let nature do her job for 22 days before embarking on the next step: cleaning the skeleton.

The Godbout humpback is now at the 5 Étoiles farm in Sacré-Cœur. This long-standing partner is always eager to collaborate in the success of these ventures: cleaning and preparing a skeleton in order to turn it into a museum display!

Soft ground conditions caused by the spring thaw prevented the bones from being transported from Ragueneau back to the present site, where the next steps will be carried out. With permission from the Quebec Ministry of Sustainable Development, Environment and the Fight against Climate Change and the municipal board of Ragueneau, the skeleton continued to macerate for 22 days in a container.

Upon opening the container, CIMM’s Patrice Corbeil and Pierre Olsen found that the insects had done a remarkable cleaning job. Thousands of insects and maggots gorged themselves on the whale flesh.

After overcoming their squeamishness with a couple of deep breaths, Pierre and Patrice arranged the bones in the sun.  In another two weeks, a second team will perform an additional cleaning treatment. Preparing bones for long-term preservation requires long hours of work and waiting. Indeed, whale bones contain enormous quantities of fat, which must be completely removed from the skeleton to prevent the latter from rotting. 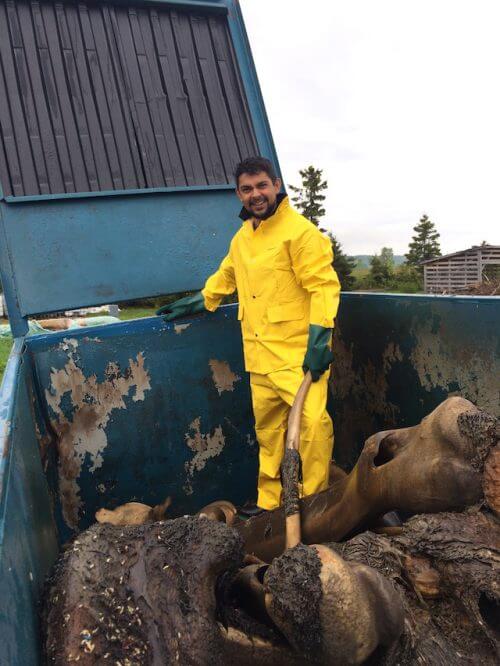 Pierre Olsen is getting ready to clean the bones © GREMM

Pending its debut display at the CIMM, here is a video of the assembly of a humpback whale skeleton at the Center for Coastal Studies in Provincetown, Maine. Known by the name Spinnaker, this whale died in 2015 after getting lodged in fishing gear. In her 11-year life, Spinnaker got herself entangled three times and was released each time by the Center for Coastal Studies. Putting the skeleton on display will help raise public awareness of the impacts of human activities on whales. For the humpback in Godbout, the cause of death remains a mystery.