After months of waiting, the whales are back in the estuary! © René Roy (archives)

The excitement is palpable this week on the shores of the St. Lawrence! For the past few days, the same words have been on the tip of everyone’s tongue. “Rorqual”… “spout”… “beluga”… The whale-watching season has officially begun! Whales Online chronicles a few of this past week’s highlights.

A beard and a few backs

The first cetacean sighting this week goes to a resident of Franquelin. “I saw a spout offshore on Wednesday. Unfortunately, the whale was far away and I couldn’t see its back, so I don’t know what species it was,” she tells us. The following day, in Port-Cartier, it was a large bearded seal at the mouth of Rivière aux Rochers that stood out. In the Estuary, bearded seals are very irregular visitors; this species is usually found in the Arctic and along the coast of southern Labrador. In Les Escoumins, two harp seals were also in one observer’s line of sight. 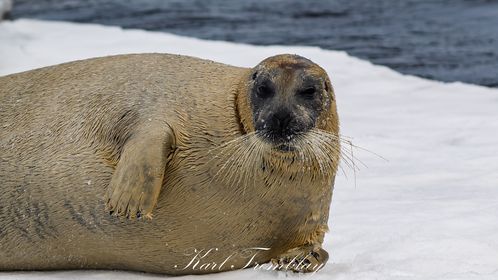 A bearded seal was seen this week. © Karl Tremblay

That same day, also in Les Escoumins, a fin whale stole the spotlight! “I was a little surprised to see one here so early in the season,” says a local observer. Braving the cold winds, this person had the opportunity to photograph the animal, which allowed GREMM’s team of technicians to make an ID. It’s Bp919, a female known since 1990 and a regular visitor to the Estuary since 2010. As our observer points out, this is a somewhat early arrival for this species of cetacean, which returns on average slightly later in April. But as we learned with the migratory journey of Bp955 a.k.a. “Ti-Croche”, the routes taken by fin whales do not follow a rigid pattern!

On April 1st, about thirty seals were observed between Cap-Chat and Sainte-Anne-des-Monts. Then, over the weekend, the action went up a notch again! On Saturday, humpback whale spouts were spotted from Franquelin. On Sunday, a minke whale was seen passing by Essipit. Lastly, a humpback and a fin whale were observed off Les Bergeronnes. The humpback is said to have raised its tail several times before diving. Could it be Bp919? Or is it another newcomer? Impossible to say without a proper visual identification.

Because they’re on the water even on weekends, sea urchin fishermen were able to enjoy an exciting early-season encounter, crossing paths with a large group of belugas near Tadoussac’s Prince Shoal Lighthouse.

On Monday, the crew of a crabbing boat operating near Franquelin observed minke whales as well as several humpbacks. From shore, one observer briefly witnessed the humpbacks take a few breaths. “It looked as if they were playing hide and seek!” she comments.

Return of the belugas

On Monday, white backs break the surface of the calm water in a spectacle that brings a smile to the face of one Tadoussac resident. “Nothing like wrapping up a work day with white backs practically in our backyard! Yes, these are my first belugas of the season! Go outside, they’re on their way to Pointe Rouge,” she exclaims. They were in front of the Pointe-aux-Vaches tidal flats, near the Prince Shoal Lighthouse. “They were moving upstream with the tide,” continues the observer.

From the Tadoussac dunes, wildlife photographer Renaud Pintiaux tirelessly scans the water. And every day, his patience is rewarded. On Monday, he too sees a fin whale, far offshore, through his binoculars. The following day, posted at Cap de Bon-Désir, he observed a dozen or so belugas. Three or four very large white individuals were swimming in a small group near shore, while the others remained a little farther away. Among them were a few grey-skinned individuals, a telltale sign of their young age. 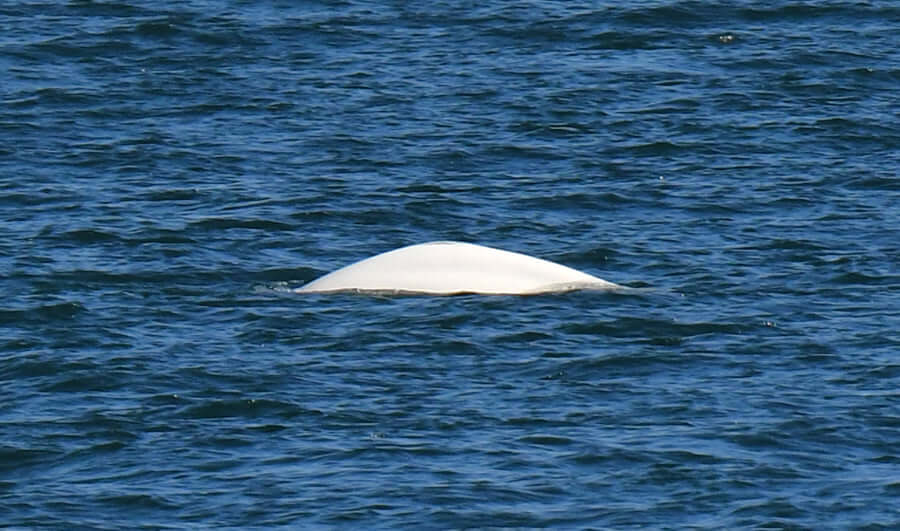 The white backs of belugas are always exciting to see! © Renaud Pintiaux

Renaud also observed the daily arrival of grey seals in the Estuary, while in Gaspésie, harbour seals were seen every day in Gaspé Bay.

The days come and go and the sightings keep pouring in. On April 5, two minke whales and a very distinctive spout of a humpback were reported in Franquelin. Not far from there, a resident living near Pointe Mistassini claims to have observed whales from his home every day for a week now.

On Wednesday, April 6, Renaud Pintiaux announces over the phone his sighting of a large minke whale with a notch in its dorsal fin. “It approached from the east, circled around the cape, then sped away toward Tadoussac,” he says. A few hundred kilometres away, an observer stationed at Pointe Paradis phones in to report what appears to be three fin whales.

The long wait is over at last. After months under a sheet of ice, the St. Lawrence is now welcoming cetaceans as they return to its waters. The Whales Online team wishes everyone a wonderful whale-watching season!