Surprising Numbers of Whales as 2020 Kicks Off

Blues, fins, humpbacks. Minke whales. Belugas. Even harbour porpoises! Not to mention thousands of harp seals and harbour seals. The holiday season proved favourable for marine mammal observations both in the North Shore and in the Gaspé Peninsula. So much that we are even publishing a map of all the sightings. A quick look back at some of the more noteworthy observations over the past few weeks.

GREMM’s scientific director Robert Michaud scans the open sea from his home in Les Bergeronnes.  On December 27, he spots thousands of harp seals resting on the ice. “This is the first time I’ve ever seen so many here!” he remarks, surprised. The next day, the ice disappears and with it, the seals.

January 2: a white back appears. Who is this solitary beluga? Through his spotting scope, he scrutinizes the animal and notes the notches in the dorsal crest. The beluga shows its right flank. The deep, bear paw-shaped scar reveals its identity: it’s Yogi! Known since 1986, this female is often the last to be observed in winter and the first to be observed in spring.

The following day, 25 belugas split into two groups swim in front of the rocks near Essipit. Captains in Les Escoumins have been observing them frequently in recent days. 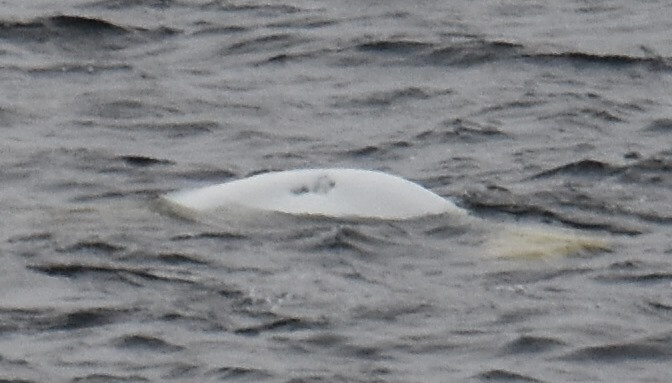 “This is the first time I’ve seen so many whales in winter!” exclaims one local resident. On January 3, she thought she observed two species. “It’s a big display,” she comments, referring to the surface feeding manoeuvres that cause pectoral fins to spring out of the water like shark fins splitting the waves.

A Baie-Comeau observer who has lived there for 25 years is also surprised by the presence of whales so close to shore. “I’m fascinated. This is the first time I’ve seen rorquals in such numbers!” The absence of ice in the bay could be a contributing factor in this unusual abundance.

A five-minute drive from the village of Franquelin is a lookout at the top of a cliff. On January 6, a whale enthusiast films two blue whales near the shore from this vantage point. Farther offshore, other spouts catch her by surprise. On January 7, a blue whale is present, in addition to two humpbacks. “One of them even breached twice!” exclaims one observer who came from Baie-Comeau to watch the whales. 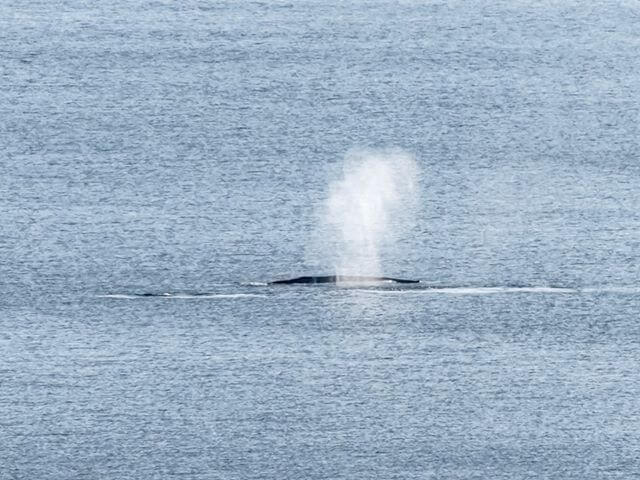 Between December 20 and January 6, observations were being reported almost daily. “It’s a remarkable way to wrap up the year,” remarks a photographer residing in Godbout. From his home, he observes fin whales and humpbacks foraging along the coast. The whales are performing lateral engulfing manoeuvres called lunges to trap their prey in their mouths before spitting water out through their baleen and swallowing the prey. Were they feeding on krill or small fish?. In one of the photo he sends in, we can see an orange spot near the whale. Is it feces or the water reflecting off the animal’s pectoral fin? Difficult to say for sure. If it is excrement, the colour suggests that krill would have been the prey of choice. 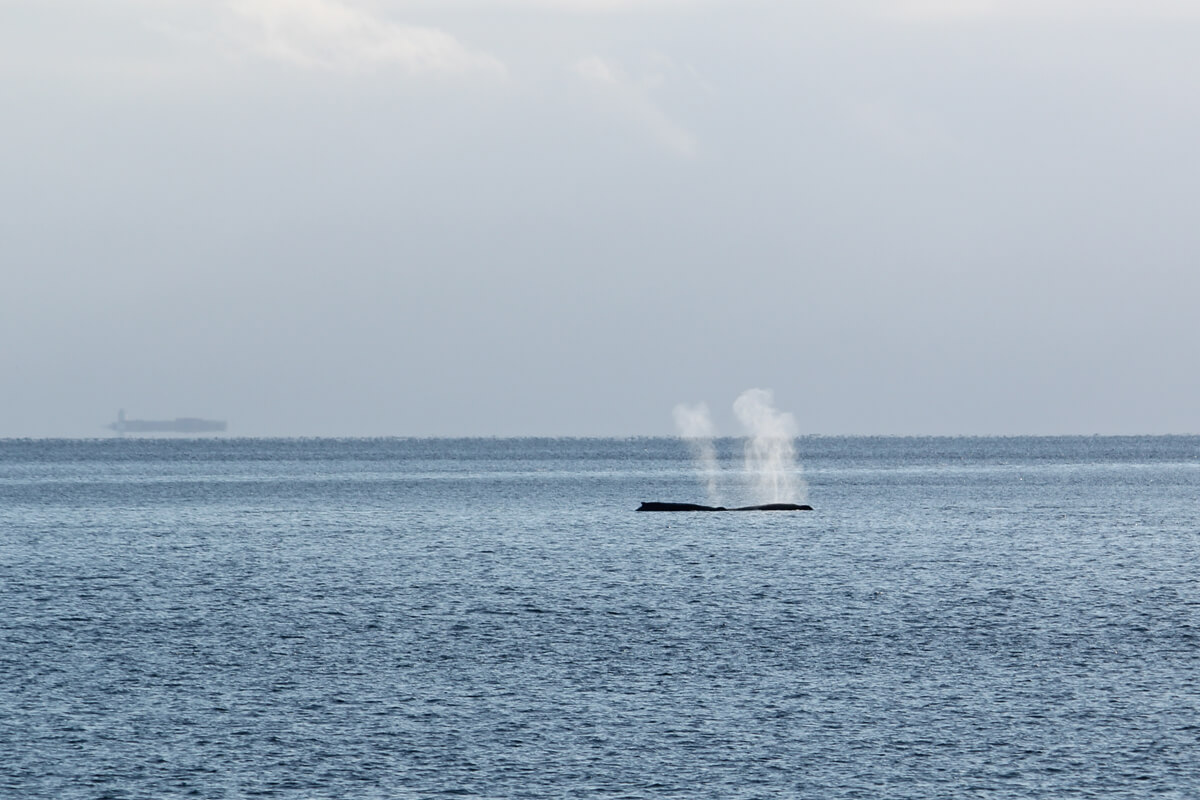 Braving the cold and the ice, Jacques Gélineau heads out to sea on January 3, instigated by the spouts he spotted from his home in Port-Cartier. His efforts are rewarded with the observation of ten fin whales, two blue whales and even a minke whale. “There were large clouds of krill on the surface, which the whales were feeding on,” he notes. He was accompanied by a TVA reporter, whose story can be read and seen here (in French).

On January 7, he sets sail again. This time, he spots two blue whales and two fin whales. “It was an excellent outing. I think this will be the last one, as the ice is getting too dangerous to navigate.” He will continue his observations from shore. 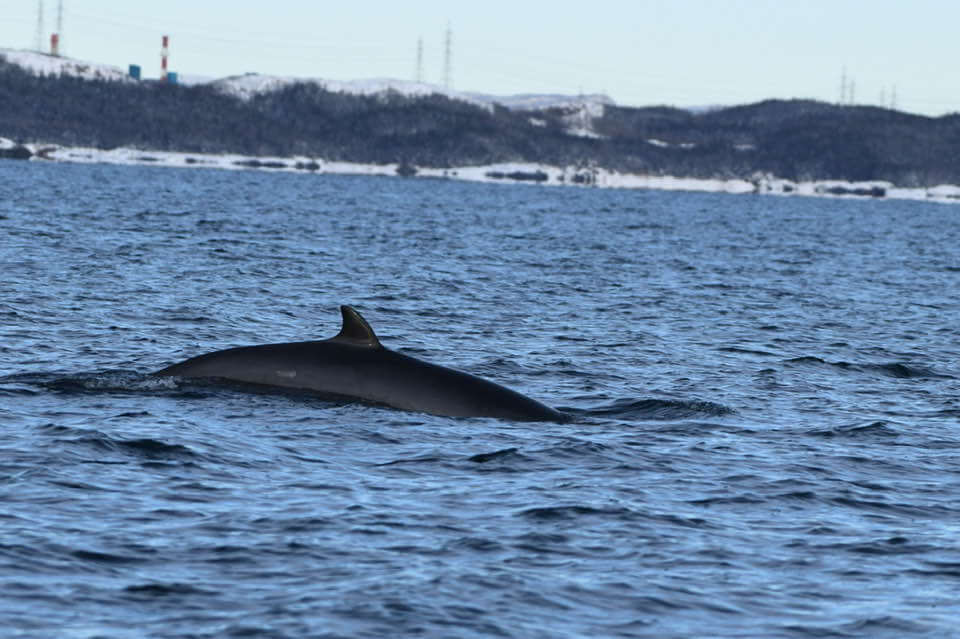 On the ice, about 30 metres from the Gaspé shore, a particularly massive seal is at rest. Its black spots, all-black muzzle and morphology suggests it is a hooded seal! This pinniped visits the St. Lawrence in winter to feed, but also to give birth on the ice floes between mid- and late March. Harbour seals are swimming nearby.

“It was awesome,” exclaims a birder. As she’s tallying seabirds, tall white columns off the coast draw her attention. Savouring the moment, she turns her scope toward the spouts and counts at least five fin whales. They are feeding at the surface, pointing their pectoral fins into the air and at the same time allowing a small triangle of their tails to poke above the water. “I could see their ventral grooves stretching!” she exclaims. 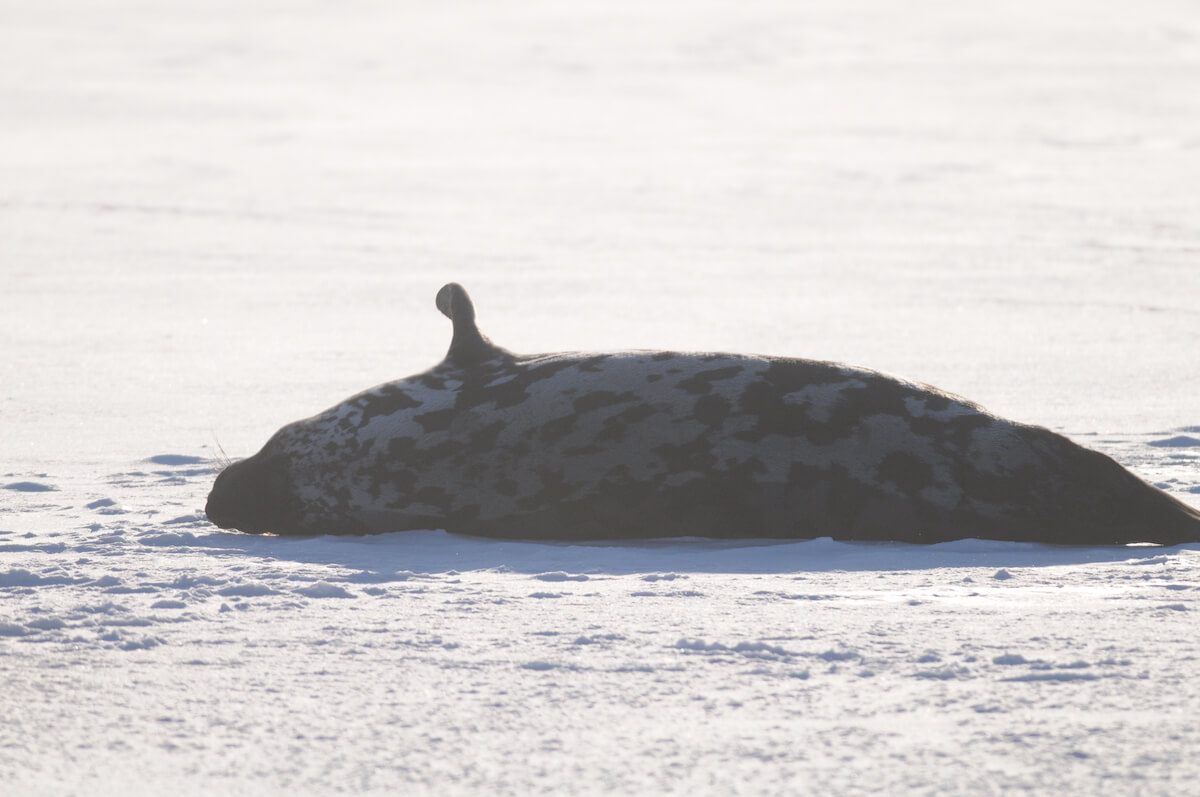 On December 31, two harbour seals are seen swimming near Nuns’ Island in Montreal. If you’re out on the water, be careful to give these pinnipeds their space, even if they are outside their usual range. Most likely they have already left for the Estuary, but other young seals might venture upstream again to explore the St. Lawrence.

Here is the map of observations from the past few weeks. Though it gives an idea of how rich life in the St. Lawrence is, it should not be taken to represent an accurate census of the whales and seals that are present. Have fun with it! 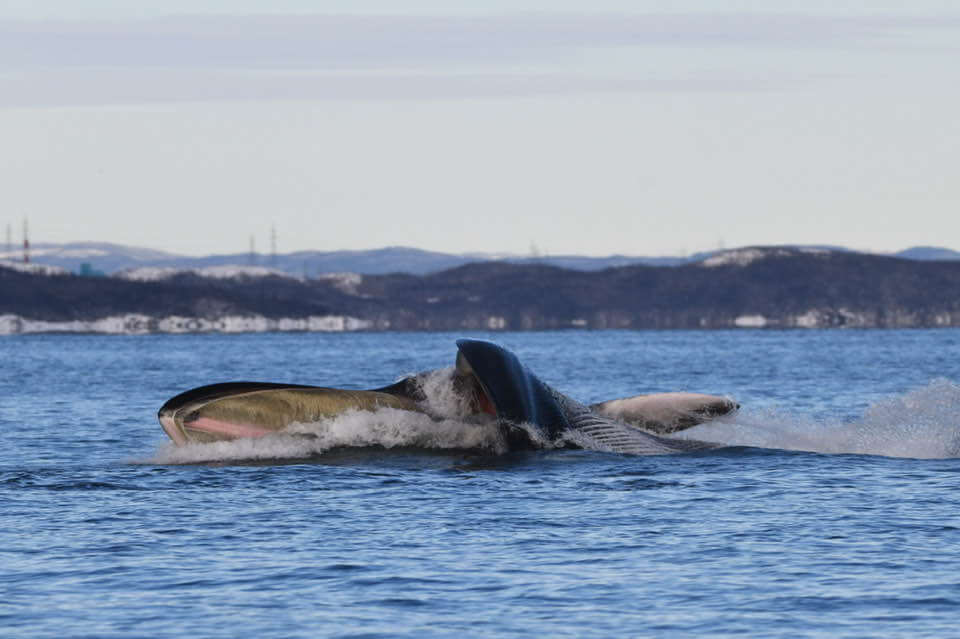 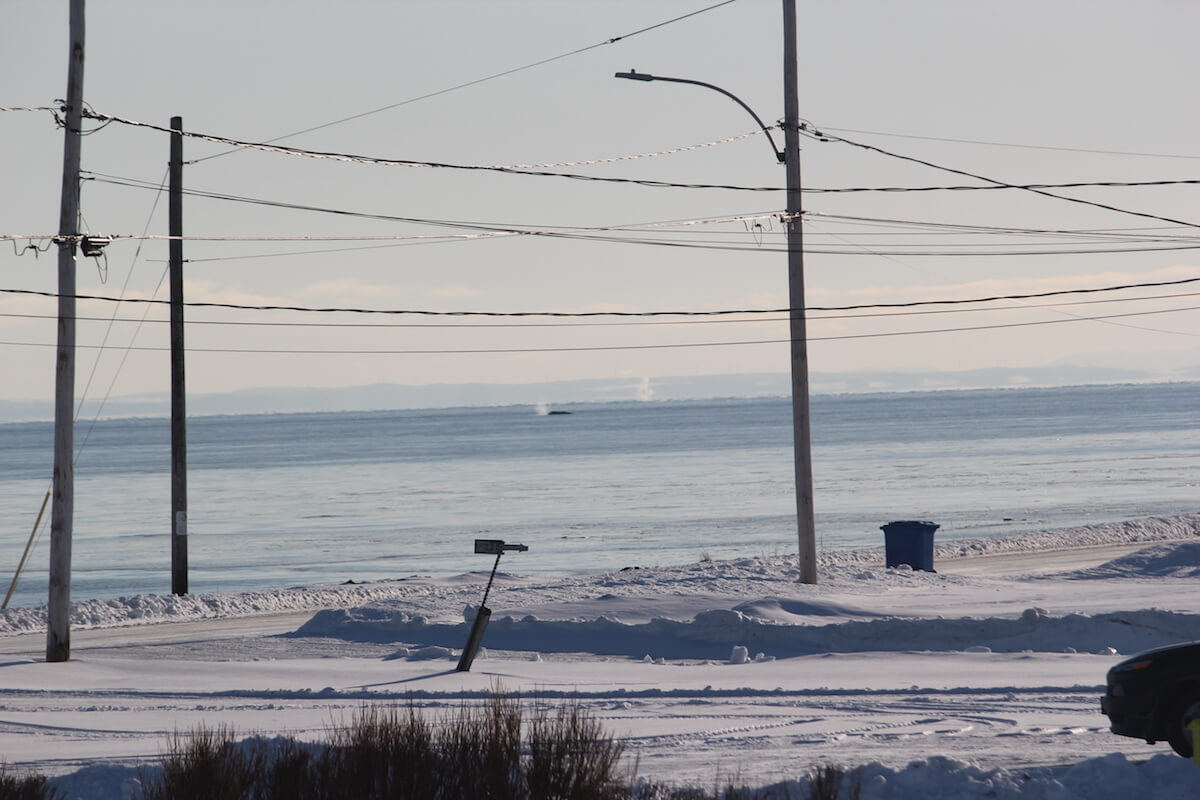 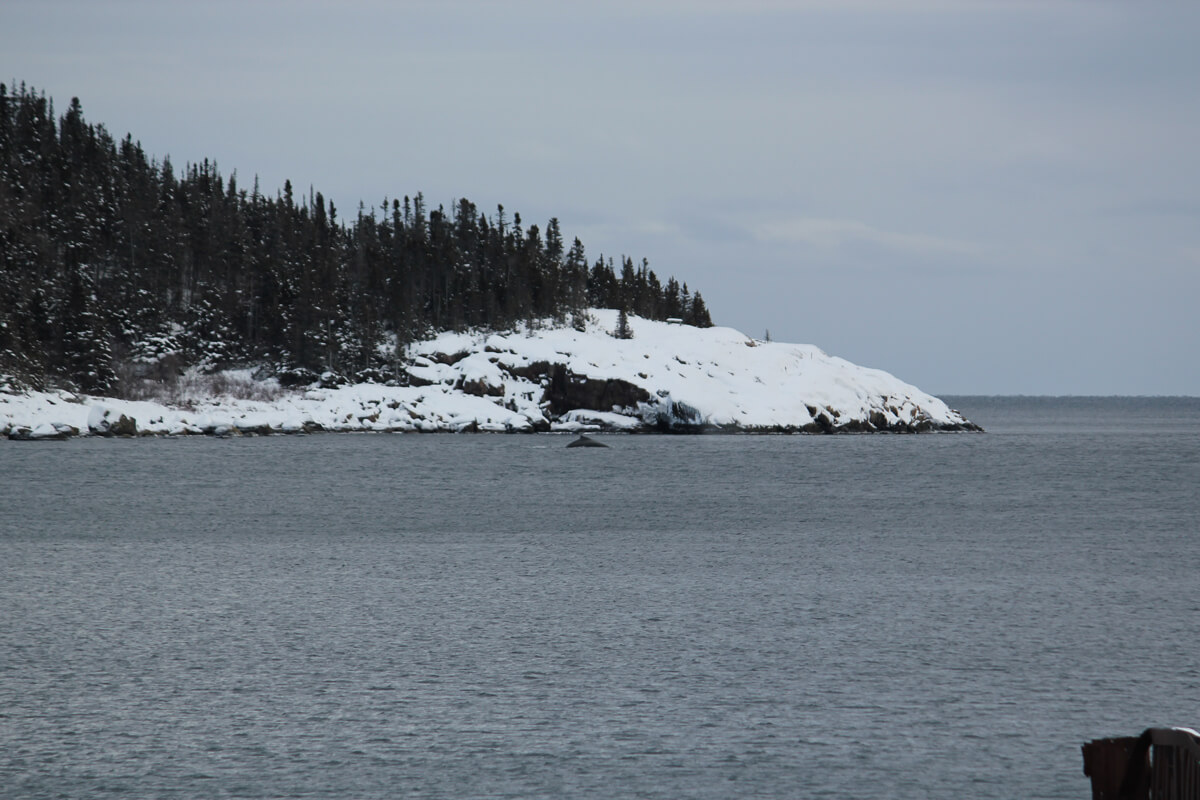 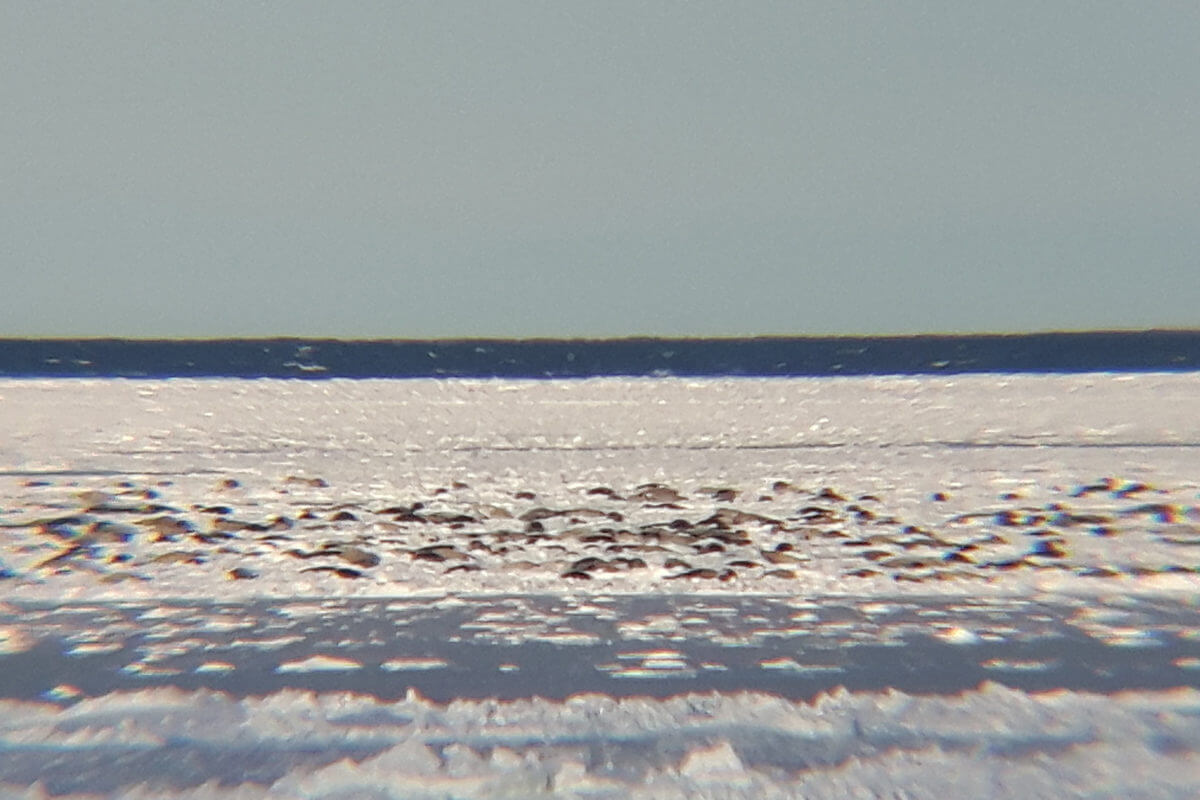 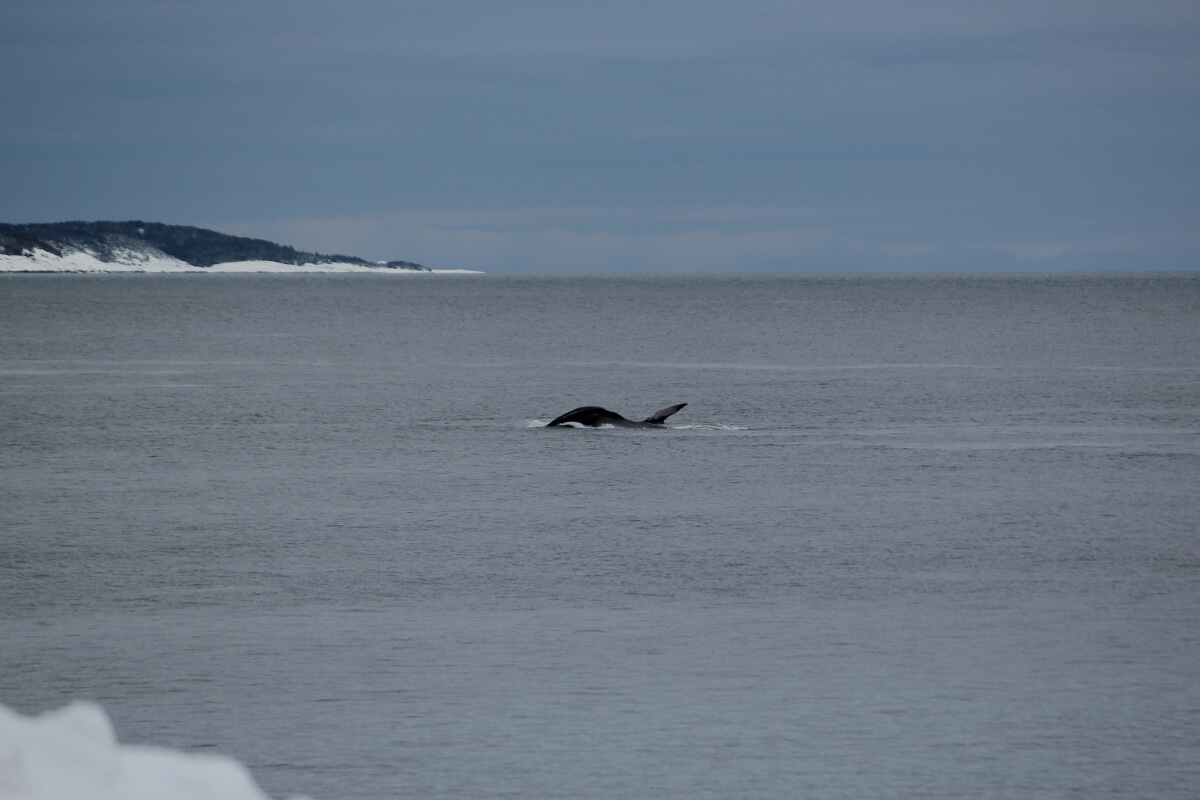