Summer not quite over for the whales 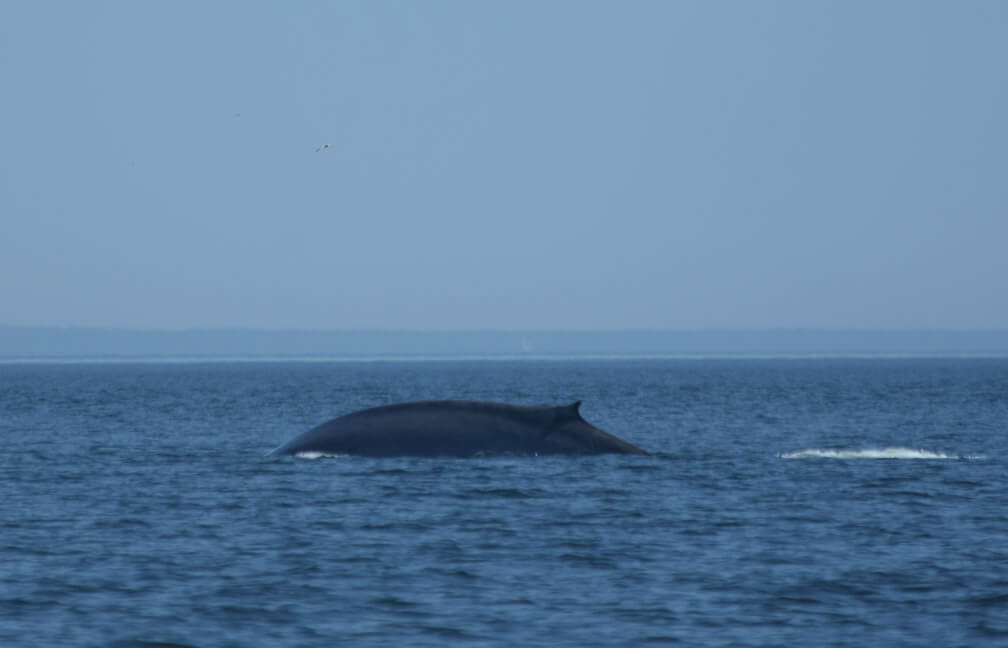 August 28: A bright-eyed naturalist returns to the wharf in Percé. No sooner does the boat leave the docks when she and her passengers cross paths with a minke whale. Then, a group of three fin whales together with a blue whale are seen swimming close to each other. After that, it’s humpbacks galore, often in groups of 2 to 4. Then, northern gannets plunge headfirst into the water while white-beaked dolphins and white-sided dolphins are on the hunt. It’s a feast out here! All this action takes place in the Banc-des-Américains Marine Protected Area. “It’s at these times that we welcome the creation of this kind of protected area,” exclaims the naturalist under a radiant sun, swapping his trusty jacket for a t-shirt even as summer draws to an end.

This action-packed day contrasts to some of the quieter days, when only three or four whales are observed. “Every day we see at least two species. Sometimes we can see five or six species, with interactions between them. Every day is different,” confirms a whale-watching outfitter based in Forillon National Park. Over the past week, his team has been marvelling at humpbacks, fin whales, blue whales, harbour porpoises and white-sided dolphins.

Visiting giants who need our love

It came and left almost immediately: a blue whale off the coast of Les Escoumins. A research assistant from the Group for Research and Education on Marine Mammals has just enough time to snap a picture. This is the first of its species to be documented in these parts this season. Blue whales are endangered. One of the threats they face, disturbance by boats – whether commercial or recreational – can be mitigated. If you see the blue whale’s impressive spout and huge back while you are out on the water, maintain a minimum distance of 400 metres from the animal. Even if it is the largest animal on Earth, the blue whale is easily disturbed when carrying out its activities.

Other blue whales are present in large numbers around Rivière-Madeleine and Matane. At the Mingan Island Cetacean Study (MICS), Richard Sears and his team are documenting individuals in the area and setting guidelines for tracking their diving and feeding behaviours. René Roy accompanies the team. On the other end of the telephone line, he says: “These waters are teeming with life. We’re seeing a lot of krill. Oh, hold on, I’ve got a whale in sight, gotta go!” Research doesn’t wait for us!

On the other side of the St. Lawrence, the MICS team photographs three North Atlantic right whales off the western tip of Anticosti Island. This species is also considered endangered. To help them, collisions and entanglements in fishing gear can be prevented.

On August 25, a Sowerby’s beaked whale is observed dangerously close to the shores of Île Verte. This species is poorly documented, but its future is cause for concern. The animal eventually returned to the open sea and has not been seen since. You can find out more details about this incident here.

On August 24, fishermen set sail from Matane to test their luck at hooking a few mackerel. Between catches, they scan the calm waters in hopes of spotting a whale. About 75 metres from the boat, a triangular fin appears, slicing through the calm water from south to north before disappearing. One of the fishermen throws a chunk of mackerel overboard. The fin reappears and approaches at full speed: no doubt about it, it’s a shark! The nearly 3-metre long animal swims close to the hull. “I’m so excited, I try to take a few pictures without really knowing whether my lens is properly focused. Actually, they turned out pretty good,” says a fisherman and long-time observer of whales. Shark specialist Jeffrey Gallant confirms from his photos that it is a porbeagle, a species of mackerel shark. If you happen to spot a shark, even at a distance, he recommends raising all the lines out of the water to avoid accidentally catching the animal.