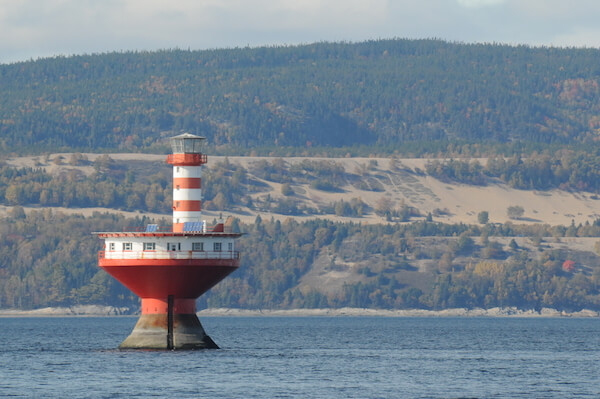 Off L’Anse-Saint-Georges in the Gaspé, a tour operator observes two spouts on May 24. The mushroom shape leads him to believe that it is two humpbacks. “Just one more week and we’ll find out what species is under those breaths,” he says, eager to get out to sea again. The boats are ready to go, the weather forecasts are favourable, the start of the season looks promising.

In Percé, a guide-interpreter working on Bonaventure Island scouts the water for signs of life. Although he has yet to see anything, he is confident that the situation is bound to change soon, as “the capelin will be arriving.” A number of residents associate the beginning of whale sightings with the capelin spawning season, which generally occurs from mid-April to early August. Every year, these small silvery fish venture onto certain beaches of the St. Lawrence to lay their eggs, which will remain buried in the substrate until they hatch. It’s a striking phenomenon to witness, both to observe the hordes of fish “roll” in the waves and to see the people gathered in the middle of the night to harvest them by the shovel- or bucket-full.

Capelin is on the menu of several predators such as harp seals. Several herds of harp seals are seen along the North Shore, notably in Franquelin, Les Escoumins and Tadoussac. The vast majority of these animals leave in summer for their feeding grounds off the west coast of Greenland and in the Canadian Arctic, but on occasion small groups break the general trend and summer in the St. Lawrence Estuary.

For minke whales, the schools of capelin are also a delicacy. To catch these rapid prey, they deploy a number of hunting manoeuvres adapted to the sectors where they are. For example, in the Saguenay Fjord, minke whales spend more time corralling prey near the surface by performing particular moves such as frog jumps: the animal sticks its head out of the water and strikes the surface. In the Laurentian Channel, off Les Escoumins, the upwelling of deep waters created by the tide, currents and topography plays a role in the herding work. This week, five or six minke whales are seen at the mouth of the Saguenay, as is a fin whale. Our collaborator in Franquelin also reports a fin whale passing in front of her home on May 21 and the presence of minke whales and harbour porpoises almost daily.

On board the ferries shuttling between Tadoussac and Baie-Sainte-Catherine, passengers encountered a few herds of belugas. On May 21, a resident of Cap-à-l’Aigle observes a mother beluga and her young a mere 150 m from the coast. Later that day, some twenty belugas are swimming in the glassy waters of the Estuary.

On May 19, the Tadoussac Bird Observatory (OOT) team is having a memorable day. From the top of the Tadoussac dunes, between 7 am and 1:30 pm, over 22,000 passerines are tallied! “After the passage of a cold front around 5:30, the winds turned northwest and a major migration correction began,” reports the team on its Facebook page. A migration correction occurs when birds readjust their trajectory after a night of migration. May 23 was once again a busy day with another “migration correction”. More than 3,000 warblers (all species combined) are noted from the docks at Les Bergeronnes in under three hours!