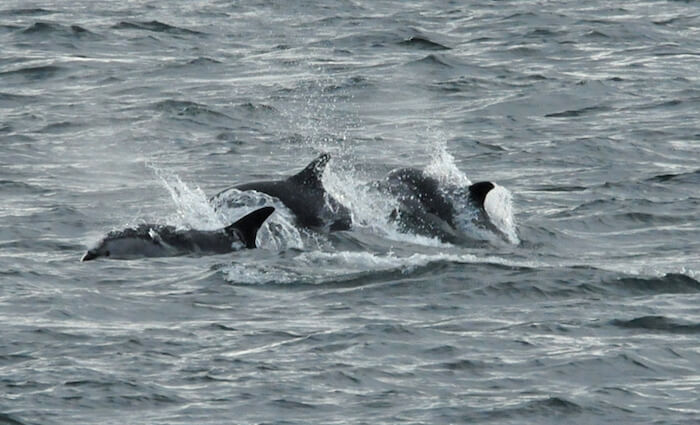 Since the beginning of fall, large rorquals have been everywhere along the St. Lawrence Estuary, but this week it is small cetaceans that have been making headlines.

All of our collaborators off the coasts of Gaspé, Rimouski and Tadoussac have been talking about white-sided dolphins! On Monday, a herd of more than 150 individuals was seen off the Tadoussac dunes. On Wednesday, several small, more scattered groups were seen. In the Rimouski sector, a hundred or so white-sided dolphins were observed by a team from the Mingan Island Cetacean Study (MICS). Farther downriver in the Gaspésie, a captain out of Gaspé Bay spotted a few herds earlier this week. He also was surprised to observe, once again, bluefin tuna. “There must be a lot of herring,” concludes the captain.

At each of these encounters, dolphins were leaping out of the water at full tilt, reaching heights of over two metres in the air. Magical and unique observations! Especially for the Tadoussac area, where this species is rarely observed.

Harbour porpoises have also been rather omnipresent and in large numbers. Less acrobatic and active at the surface than their cousins the dolphins, harbour porpoises know how to play hard to get. The strong autumn winds certainly don’t help to spot them, so it takes patience to observe them.

And of course, let’s not forget about the St. Lawrence belugas. They can be seen not only by boat or ferry, but also from the rocks just about everywhere between Forestville and Kamouraska.

Large rorquals are also still present. In recent days, off Tadoussac, ten fin whales have been seen at various locations between Cap de Bon-Désir and Île Rouge. And the young humpback Picotine has been present in the sector continuously since mid-May. In the Gaspé Peninsula, only one fin whale was observed last week, near Île Plate. It was MICS that saw the greatest numbers of large rorquals off Rimouski: three fin whales, two blue whales including Jawbreaker, and eight humpbacks including Aramis and Siam.