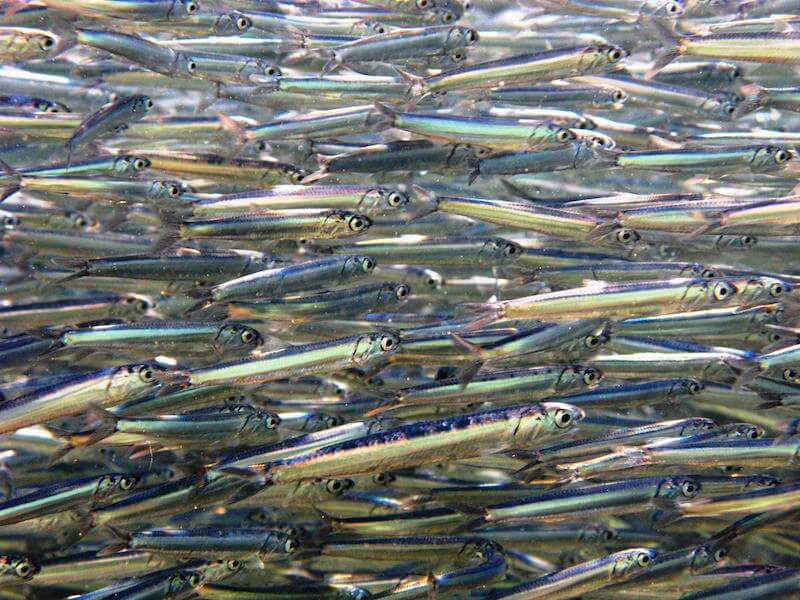 Prével (Gaspésie), Sept-Îles, Portneuf-sur-Mer (Côte-Nord): “Waves of silver” say some local residents when talking about a particular time of the year – the spawning of capelin – when this little fish of the cold waters of the northern hemisphere comes to shore to lay its eggs. Spawning has begun in several areas of the Estuary and Gulf and will continue through early August. Males reach shore first, where they wait for their female counterparts to start breeding. They squeeze the sides of the females to extract the eggs. With vigorous flaps of the tail, the fish deposit the fertilized eggs in the sand or gravel. There they are protected from the tides and predation until they hatch about two weeks later. It’s a striking phenomenon to witness, both to observe the hordes of fish “roll” in the waves and to see the people gathered to harvest them by the shovel- or bucket-full. Further, the public is invited to share their observations of this natural phenomenon at the St. Lawrence Global Observatory – Capelin Observers Network. After spawning, it is not uncommon to observe considerable amounts of dead capelin on the beach or in the water; these are especially males that are injured from repeatedly mating on the sand or gravel. Capelin is a delicacy for many species of fish, marine mammals and birds. According to estimates by Fisheries and Oceans Canada (2011), 300,000 to 400,000 tonnes of capelin are believed to be consumed annually in the Estuary and Gulf.

Near Sept-Îles, where capelin have begun to spawn, more and more whales are being seen. In the immense Sainte-Marguerite Bay, our collaborator Jacques Gélineau spots two minke whales, two humpbacks, two blue whales and a large unidentified whale… all in one week! In Franquelin, the appearance of fin whales does not go unnoticed for one dedicated observer, who notes their presence several times in the course of the week. There are also minke whales and harbour porpoises.

Less than a kilometre from the Grande-Grave wharf in Gaspésie, four humpback whales are observed on May 28 by a local hiker who can hardly wait for the start of his season, which is right around the corner (June 1)! A naturalist working with him is also lucky enough to spot two humpback whales on May 26 from the high cliffs of Forillon National Park, specifically from Graves Trail. Humpbacks are not the only animals she observed on her hike. She also mentions the presence of harbour seals, surf scoters, black guillemots and porcupines!

Great news for the “mariners” of the Saguenay-St. Lawrence Marine Park: the fin whale Bp955, a.k.a. “Ti-croche”, who has been seen for the past several weeks in the area, has been confirmed as the descendant of the late Capitaine Crochet! She is not the only one of her kind in the region: Bp918 is also there. The latter is recognized by its dorsal fin that looks as though it’s been sawed straight off. Minke whales are also livening up the sector. One was actively hunting near the Marine Mammal Interpretation Centre in Tadoussacon May 27. Also, from the rocks of Cap de Bon-Désir in Les Bergeronnes, observers witness a few harbour porpoises swim by.