Signs of Life, from Charlevoix to the Gaspé 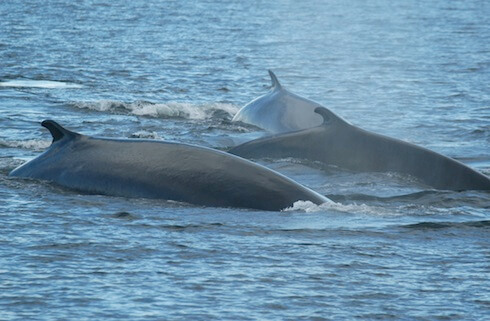 Great news for those eagerly awaiting the return of whales in the St. Lawrence: cruise operators, land-based observers and researchers have had plenty of action in recent days.

On May 13, the beach at Sainte-Irénée in the Charlevoix region was the scene of an anticipated event among locals: capelin spawning. At sunset, small clusters of people formed on the shore waiting for the capelin to “roll.” While some sported waders and were scooping the prized fish out of the water with nets, others lit campfires and set up chairs. On May 15, our collaborator René Roy also reported fresh capelin in Pointe-au-Père, which turned into a feeding frenzy for seabirds. A minke whale was seen surface feeding on the evening of May 19 in the Cap-à l’Aigle sector and later in Pointe-au-Pic. Chances are that they were feeding on these small fish, the preferred prey of this cetacean. That same day, the arrival of the “Miraculous Catch of Fish” was announced in Port-Cartier (Côte-Nord region). Moreover, Fisheries and Oceans Canada and the St. Lawrence Global Observatory kicked off their annual information campaign through the Capelin Observers Network (CON) in an effort to better understand the fish’s behaviour and habits in order to better preserve this species. The public is invited to participate in the CON by reporting capelin observations either online or by phone (1-877-227-6853).

At the mouth of the Saguenay on Saturday afternoon, nearly a dozen belugas were seen from the Pointe-Noire promontory swimming toward the Gulf of St. Lawrence. The loosely-knit group consisted of largish white adults with a few gray juveniles here and there. They moved quickly, aided by the currents of the falling tide. At about the same time, a few belugas were also observed at Cap de Bon-Désir in Les Bergeronnes.

This week the Saguenay–St. Lawrence Marine Park received visits from at least six minke whales, three fin whales and two humpbacks. The first humpback whale was seen in Les Escoumins on Sunday, May 15, while another observer reported the presence of a humpback on May 19 off of Cap Granite. The one in Les Escoumins was photographed; this is the first calf of Fleuret, which was born last year. Is this the same individual as the one observed a few days later? That remains to be confirmed.

In Franquelin (Côte-Nord region), winds and rain have recently complicated observations, but reports are still coming in of minke whales and today, two harbour porpoises were spotted.

Humpbacks also arrived this week with great fanfare in the Gaspé Bay. A MICS staff member announced the return of the humpback Pseudo with calf in tow! This is her first offspring since 2006. According to the MICS team, the calf does not yet lift its tail, so no photos are available to identify its colour pattern. Calves generally begin to lift their tail later in the season, although some individuals never show their tail. Pseudo is the first mother observed by MICS in 1982 while she was with her first calf… Fleuret! And what a pleasant surprise: swimming alongside them was Gaspar! This other female humpback was first encountered in 2005 and has returned every year since. In the Gaspé Peninsula she is known as Boom Boom River (BBR).

Geyser-like Spouts at the Water Surface

Clearly, Saturday was an eventful day in Gaspé Bay. On Saturday morning, two humpback whales were breaching repeatedly off the…

Friday morning, from the top of the dunes in Tadoussac, an avid birder spots some splashing in the middle of…

“It’s been a quiet week for whales,” admits a resident of Percé, “but grey seals have been abundant. From our…