Second minke whale stranded in lévis in one year 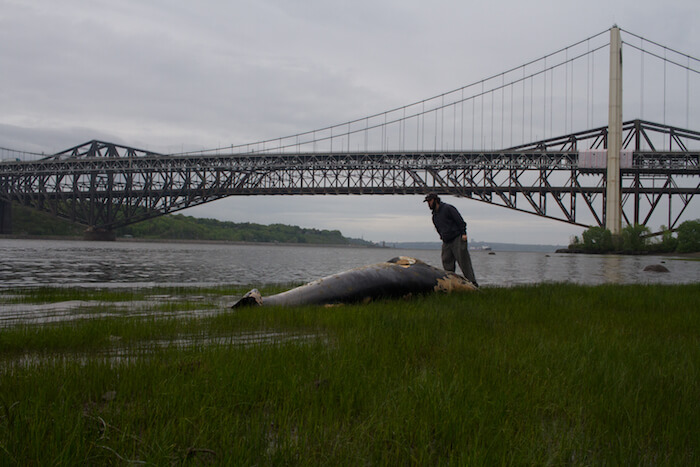 While on the US east coast, an unusual mortality event of minke whales triggered an investigation, the situation seems less worrying in Quebec. In the photo, a minke whale stranded in Lévis in 2017.

On the afternoon of June 6, veterinarian Stéphane Lair conducted a cursory external exam of the minke whale. It was confirmed that the animal is a male minke whale, probably less than one year old. Due to the advanced state of decomposition of the carcass, a complete necropsy could not be conducted. However, samples were taken to allow a researcher from Fisheries and Oceans Canada’s Maurice-Lamontagne Institute to complete various analyses, particularly with regard to hormonal levels and diet composition.

Although the exact cause of death remains unknown, the carcass shows no evidence of collision with a vessel or entanglement in fishing gear. Considering the young age of the animal, the most probable hypothesis would be that it was not able to feed alone after it was weaned.

As for its presence in Lévis, an area not typically frequented by whales, the most plausible explanation remains that the floating carcass was dragged by the bow of a ship. A similar incident once resulted in a whale carcass being transported upriver all the way to the port of Montréal.

It should be noted that it is rare to see male minke whales in the St. Lawrence. The first observation of a male was confirmed in 2004. It is generally pregnant females that frequent the Estuary in summer. Even the presence of juveniles is rather unusual. However, with the stranding of a young male minke whale in May 2016, another in June 2017, and the presence of a mother-calf pair near Tadoussac, perhaps we witnessing the beginnings of a new trend. Will we see a change in the way minke whales use the Estuary? Time and observations will tell.

To hear Stéphane Lair’s interviews in the media

Another whale stranded on the riverbanks in Lévis (in French, Radio-Canada, June 6, 2017)

Second Minke Whale Stranded in Lévis in One Year

On Monday afternoon, a fisherman from the St. Lawrence’s Fluvial Sector reported to Marine Mammal Emergencies a minke whale carcass drifting under the Pierre-Laporte Bridge in the vicinity of Parc de la Chaudière. The carcass finished its course in the flood zone and photos provided by the fisherman revealed that the minke whale was small in size and therefore a juvenile. This story is reminiscent of the stranding of another juvenile minke whale in May 2016, practically in the same area in Lévis.

Whales belonging to the rorqual family are the subject of scientific projects being carried out by researchers at Fisheries and Oceans Canada (DFO). These whales have hairy structures on their upper jaws that they use to filter out water and thereby remove their prey (plankton and fish). These baleen, once analyzed in the lab, can be used to trace the whale’s diet, amongst other things. Baleen often quickly fall off the carcass once the gum decomposes, but in the case of the minke whale stranded near Québec City, its baleen are still present and intact. DFO researchers are currently planning to take samples from the animal. In addition to baleen, pieces of skin, fat and muscle may be removed from the carcass for genetic and toxicological analysis. 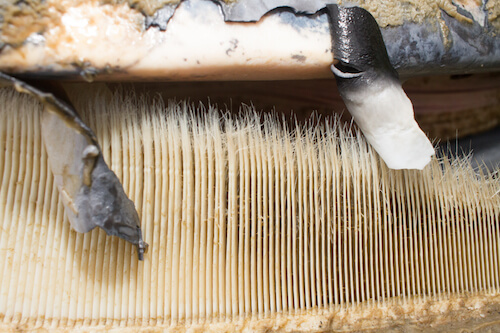 These baleen, once analyzed in the lab, can be used to trace the whale’s diet, amongst other things. © Chris Loebsack

Whales do not usually frequent the Fluvial Sector of the St. Lawrence, but rather the Gulf of St. Lawrence and its Estuary, where the waters are cold and salty and where the preferred prey of these giants are found. What in the world might this minke whale have been doing in the Québec City area? This is the question that comes to mind amongst Marine Mammal Emergencies team members; no explanation has yet been proposed. In order to document this stranding, Stéphane Lair, veterinarian for the Centre québécois de la santé des animaux sauvages as well as the Aquarium du Québec, will visit the site at the end of the day accompanied by Marine Mammal Emergencies volunteers. Particular attention will be paid to the round markings clearly visible on the whale’s skin and which suggest poxvirus, a contagious skin disease (article in French). Data will also be collected on the animal’s size, sex and other interesting external morphological data.

An unusual story… to be continued! 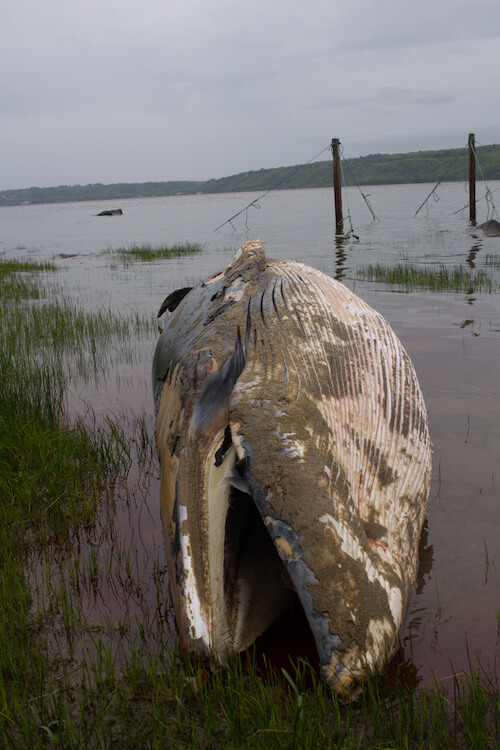